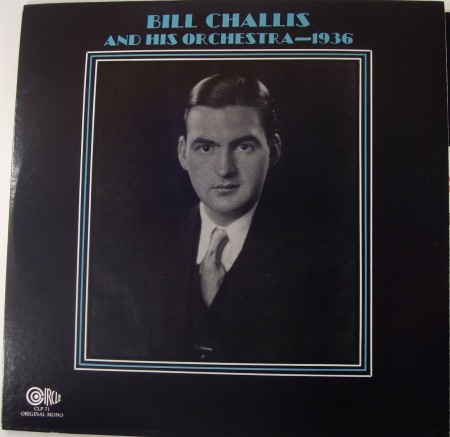 One of jazz’s great arrangers, the music of BILL CHALLIS (1904–94) remains fresh and invigorating ninety years after his first renown. He came from Wilkes-Barre, Pennsylvania, where he learned piano and saxophone. At Bucknell University, Challis studied economics, played sax in a college dance band and after its leader graduated, Challis took over, eventually expanding the unit from six to ten pieces. With no formal training in orchestration, Challis also arranged the band’s songbook, following his own sense of what was musically effective and enjoyable to play. 1926 would be his annus mirabilis: admitted to the University of Pennsylvania law school, Challis spent his post-graduate summer with trombonist Russ Morgan’s Scranton Sirens through whom he met Charles Horvath, manager of the Detroit-based Jean Goldkette Orchestra, who invited Challis to send him some sample arrangements. Challis did and was hired shortly after: Goodbye Philly, hello Southboro, Massachusetts, where Challis joined the band that September. On October 13, they were in Manhattan, booked opposite the Fletcher Henderson Orchestra at the otherwise segregated Roseland Ballroom. Challis had three geniuses at his disposal, Bix Beiderbecke, Joe Venuti and Eddie Lang, while Henderson had the awesome Coleman Hawkins on saxophone and two great arrangers, himself and Don Redman. “It was a humiliating experience,” recalled Henderson’s then 20-year-old trumpeter Rex Stewart. “We were supposed to be world’s greatest dance orchestra and up pops this Johnny-come-lately white band from out in the sticks cutting us. Their arrangements were just too imaginative and their rhythm too strong.”

On his or her birthday, HiLobrow irregularly pays tribute to one of our high-, low-, no-, or hilobrow heroes. Also born this date: Louis Jordan, Ernst Bloch, Percy Grainger, Carmen Mondragon.