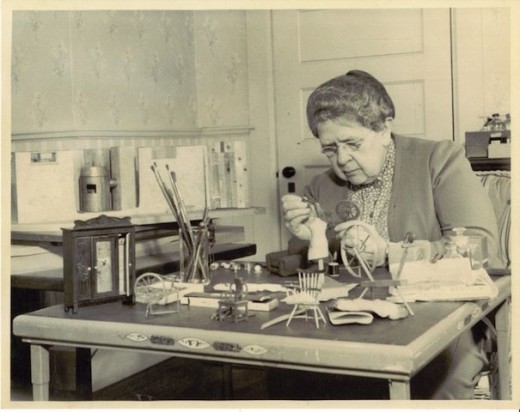 Said to have inspired Murder She Wrote’s Jessica Fletcher, FRANCES GLESSNER LEE (1878–1962) was a millionaire heiress who woke up one morning with an urge to revolutionize the field of Crime Scene Investigation. Her most famous contribution, The Nutshell Studies of Unexplained Death, were a series of eighteen training courses for police in the 1940s and ’50s. At the typical Nutshell Study, up to forty leading crime scene investigators would be presented with intricately constructed dioramas of real-life murder rooms — complete with doors, windows, functioning electric lights and realistic blood and guts. After granting the investigators ninety minutes to study the grisly-cute scenario, Glessner Lee would point out the myriad telling details they hadn’t spotted and what the implications of those details might be. After this humiliating wake-up call, the sexagenarian amateur sleuth would take them all for a slap-up dinner at the Ritz.

PS: The Nutshell Studies of Unexplained Death are on permanent loan to the Maryland Medical Examiner’s Office in Baltimore. Though they’re not open to the public, they can be seen in an illuminating documentary called Of Dolls and Murder.

On his or her birthday, HiLobrow irregularly pays tribute to one of our high-, low-, no-, or hilobrow heroes. Also born this date: Cecil Taylor, Flannery O’Connor, David Lean.