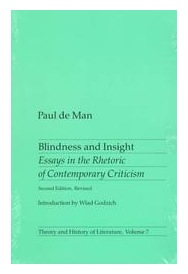 For those of us attending the Yale graduate school in the late 1980s, the figure of Belgian-born American literary critic PAUL DE MAN (1919-1983) must always be dominated by the 1987 New York Times front-page article detailing his anti-semitic journalism during the Second World War. “Yale Scholar Wrote for Pro-Nazi Newspaper,” the headline ran, and we ran to buy copies. It was the same year that Victor Farias published his detailed denunciation of Martin Heidegger’s Nazi flirtation. Great men of letters everywhere were being revealed as closet fascists, and grad-school Üntermenschen love few things more than intellectual take-downs over youthful political errors. De Man’s articles, from the Brussels-based French newspaper Le Soir, are tame compared to Heidegger’s Rektoratsrede and actual party membership, but they were enough to tarnish the reputation he had built, with such works as Allegories of Reading (1979) and Blindness and Insight (1983), as the world’s leading deconstructionist literary critic, pal and Yale connection of the master, Jacques Derrida. Derrida quickly came to De Man’s defence but (or should I say ‘and so’?) the debate rapidly morphed into one about the shadowy politics of deconstruction, the violence of theory, and the blindness of scholarly reputation. One critic suggested there were “grounds for viewing the whole of deconstruction as a vast amnesty project for the politics of collaboration during World War II.” That seems extreme, maybe silly, but few can deny that 1987 marked the beginning of deconstruction’s slow decline from de rigeur to passé in the nation’s fashionable graduate schools. Never glad confident morning again!

On his or her birthday, HiLobrow irregularly pays tribute to one of our high-, low-, no-, or hilobrow heroes. Also born this date: Randy Rhoads.