The Key of C

Via novelist, futurist, and ultimate hackhunter Bruce Sterling, a short demo video of music generated for 8-bit output from single lines of code.

Sterling calls this “long-tail listening,” and I think the description is apt. Beyond the retromania of 8-bit burble and fuzz, there’s the marvelous inscrutability of the code itself. It’s the single line of code expressing each passage that I find utterly beguiling; it’s notation for a music we share with machines.

In Imaginary Magnitude, Stanislaw Lem imagines “bitics,” a literary genre by and for computers. In his fictive preface to a book on the study of bitics he divides the genre into two domains, which he terms creatio cis-humana and creatio trans-humana “The first,” Lem writes, “embraces literature which is the result of the coexistence of humans and machines,” and presents itself in terms more or less comprehensible. The latter stage of transhuman bitics, by contrast, sees the generation of forms and stylings that are thoroughly native to machines; to the makers of machines, transhuman bitics isn’t merely esoteric or foreign in the linguistic sense, but unintelligible. 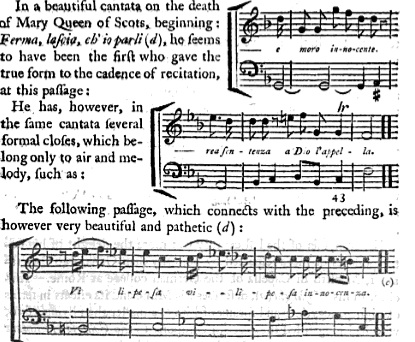 Music is inescapably uncanny in a way literature is not. Although our brains are at home in melody and harmony, our minds often feel like transient visitors in the musical realm. With these code tone-poems in C and javascript, do we have something like Lem’s cis-human bitics — a meeting ground of machine and mind, where the computer isn’t a mere instrument but a kind of collaborator? The line of code begins to seem like something more than notation or tool — it is also a meeting point, a border station between two worlds.

Is there a musical/engineering sensibility that can read a such line of code with the equivalent of perfect pitch — that can imaginatively reproduce the sounds the code will generate in the same way I can silently sing a melody from a string of notes arranged on a staff? Coder-composers, let me know — but my guess is that this isn’t quite the case. For as explained by Viznut, the hacker/composer of the music above, the logic of the code doesn’t unfold in a vacuum. It’s embodied in specific circuits — some of which, like the funky 80s-era 8-bit chipsets beloved by retromaniacs & chiptune aficionados, exhibit tricks of semiconduction that thwart or elaborate the progress of the sound in ways that can be hard to predict.

Apart from some deterministic efforts that quickly bloat the code up to hundreds of source-code characters, the exploration process so far has been mostly trial-and-error. Some trial-and-error experimenters, however, seem to have been gradually developing an intuitive sense of what kind of formulas can serve as ingredients for something greater. Perhaps, at some time in the future, someone will release some enlightening mathematical and music-theoretical analysis that will explain why and how our algorithms work.

These are acts of composition that seem irreducibly experimental, although they hint at the possibility of some future intuition.