An alien with an earth-shaped skull is a recurring motif found on all of the Funkedelic albums drawn by Pedro Bell. Since the elongated skull appears in the Funkedelic logo, I wonder if he was trying to create an icon akin to the Grateful Dead’s “Smiling Jack” skull.

Could this have been first attempts to create a brand identity for the band? Did Bell know about the crystal skulls and their alien-connection?

[This is the fourth in a series of posts about P-Funk’s Afrofuturism.]

Bell was fond of representing planets and landscapes anthropomorphically. Most Funkedelic albums featured Mother Earth or a Galactic Goddess, usually naked and in distress. These tempting damsels managed to sell sex and social consciousness.

Take Cosmic Slop, for example. An African-identified Mother Earth is coming apart due to human neglect and exploitation. That is sad. But we also get to ogle her perfect tits while pretending to study landmass on her left breast. Over Mother Earth’s shoulder, a planet moons her neighbor.

I’m intrigued by Bell’s portraits of heads as planets. The blue dude in the bottom left corner of the cover of Standing on the Verge of Getting It On reminds me of the Farscape character, Zhan. 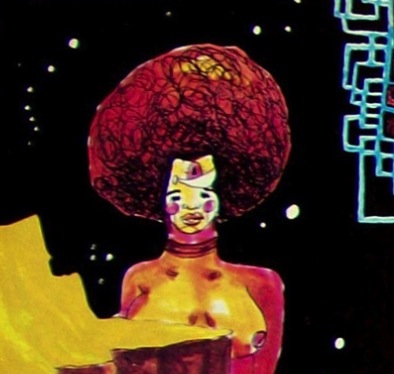 The beleaguered Goddess in the background also looks like a planet, while her sister planet looks on in sympathy from the bottom right corner. Bodies are conflated with landscapes. The cliffs protecting the Goddess have rock art etchings on their sides. I interpret these figures as reminders that every planet is sentient and alive with the Funk. Perhaps these symbolize a warning against using too much technology, to the detriment of our planetary hosts.