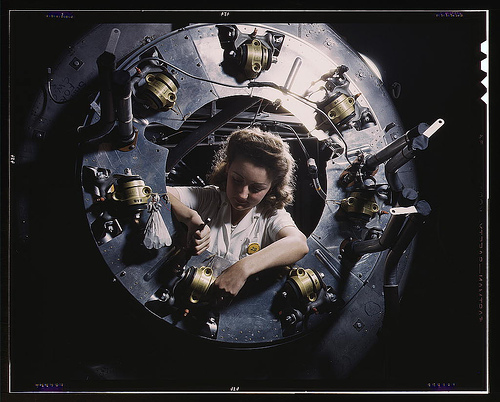 At The New Republic, Evgeny Morozov (whose much-buzzed recent book I have doubts about, but whose Twitter stream provides some of the best gnashing-teeth commentary on Gaddafi’s bloody endgame in Libya) furnishes a magisterial review of What Technology Wants, Wired founder Kevin Kelly’s manifesto for the triumph of technology as the increasingly visible hand that drives the planet’s affairs. Morozov’s review offers what Kelly’s book eschews: a history of the word technology and its uses. He describes how nineteenth-century German writers used Technologie to refer to the study of the arts and crafts; for the stuff itself, the gears and belts and systems and their making, maintenance, and use, they used the word Technik. Our translation and uptake of the word technology, Morozov argues, sort of let the stuff we call technology off the hook; shorn of the critical dynamic in which it was embedded, the word grows into a force of history:

In the early years of the twentieth century, the German debate about Technik made its way into America, when Thorstein Veblen discovered some of the key German texts and incorporated them into his own thought. But Veblen chose to translate the German Technik as “technology,” most likely because by that time the English word “technique,” the more obvious rendering, had already acquired its modern meaning. To his credit, Veblen’s “technology” preserved most of the critical dimensions of Technik as used by German thinkers; and he masterfully located it within contemporary debates about capitalism and technocracy. Other American intellectuals, while following Veblen in using “technology” to mean Technik, soon dropped this critical dimension, settling on a more politically correct and progress-friendly meaning of “technology.” When, in 1926, Charles Beard famously proclaimed that “technology marches in seven-league boots from one ruthless, revolutionary conquest to another,” he gave the term “technology” its modern meaning, severing Veblen’s connection to the critical theories of Georg Simmel and Werner Sombart. At the same time, the Technik vs. Kultur debate in Europe continued, with Martin Heidegger, Ernst Jünger, Hans Jonas, and Jacques Ellul producing penetrating critiques of how Western society had become dominated by Technik/technique and was therefore losing its moral bearings. Most of these thinkers posited the growing autonomy of technology — including the self-reinforcing behavior of the system that Kelly emphasizes — and they found this prospect terrifying.

By contrasting Kelly’s techno-triumphalism with the continental critique of Technik, Morozov points up the moral and intellectual vacuum at work in the Wired founder’s book:

Invariably, the result of Kelly’s theorizing is that deeply political and value-laden questions of power and ideology are recast in the apolitical language of technology. In some sense, Kelly’s theory suffers from the same problem that Marxist critics long ago identified in Jacques Ellul’s work on the autonomy of technology: it exonerates capitalism, and absolves powerful political and economic structures from the scrutiny they deserve. But there is also a crucial difference between Ellul and Kelly: the former was on a quest to recast the debate about the technological society in moral terms, while the latter is entirely satisfied with the technological vocabulary and seeks only to expand it with a few terms from biology. Ellul’s theory did not resolve any of the major controversies surrounding modern technology, but it was useful in highlighting the ethical void in the technological morality that was gradually replacing natural morality. Ellul did not challenge the fact that technology was making our life more comfortable and longer, but he thought that the price we pay for it was higher than commonly assumed. “We cannot believe that Technique brings us nothing; but we must not think that what it brings it brings free of charge,” he wrote in 1962.

Kelly’s long engagement with technology furnishes a fountainhead of rich observations on the life of tools. But the “ethical void” Morozov limns here is pretty vast. Kelly is one of the foremost proponents of a perspective I like to think of as gnostic empiricism: worship of the space left around facts by the death of god.