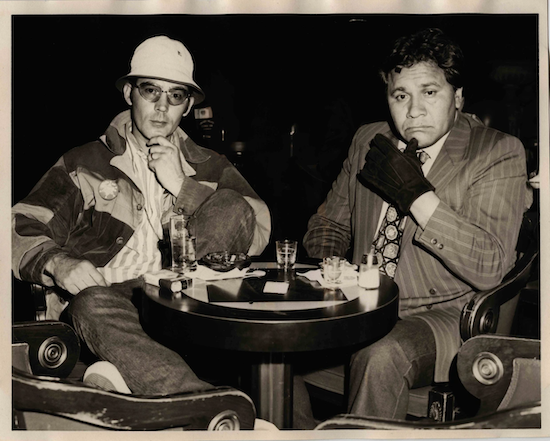 We meet Doctor Gonzo riding shotgun with Raoul Duke and being told maybe he should drive as Hunter S. Thomson’s Fear and Loathing in Las Vegas commences, somewhere around Barstow on the edge of the desert as the drugs begin to take hold, in medias res en route to non compos mentis. “I want you to understand that this man at the wheel is my attorney!” Duke informs the hitchhiker who has come aboard their convertible. “He’s not some dingbat I found on the Strip. Shit, look at him! He doesn’t look like you or me, right? That’s because he’s a foreigner. I think he’s probably Samoan.”

Throughout the book Duke refers to his associate as “my attorney.” For his part, his compatriot plays along, with his repeated edict familiar to all Fear and Loathing readers: “As your attorney, I advise you…” Not once do these dicta conform to anything like the law. Duke’s legal counsel is actually the devil in his ear. Once at the Mint Hotel, the attorney adopts another name, Doctor Gonzo. Among Fear and Loathing’s most memorable and outrageous sequences is the one where a knife-wielding Doctor Gonzo, body submerged in a bathtub and brain in a whole blotter of acid, demands Duke toss the radio into the tub with him so that he might realize his sonic and psychotic communion with Jefferson Airplane’s “White Rabbit.”

It was some time after reading Fear and Loathing that I learned about Acosta, the real-life and decidedly un-Samoan model for Doctor Gonzo.

Oscar Zeta Acosta was a civil rights attorney, Chicano Power activist, and author. In March of 1971, after writing “Strange Rumblings in Aztlan” for Rolling Stone about the murder of Los Angeles Times journalist Ruben Salazar, Thompson suggested that he and Acosta, who had been an indispensable resource for the story, go away to escape from prying eyes and ears. They lit out for Las Vegas.

After all their hallucinatory shenanigans, the two would not again see entirely eye to eye in the day-to-day realm. Acosta took umbrage with being transmogrified into a 300-pound Samoan, doubtless the most Brobdingnagian ethnicity Thompson could imagine. Thompson maintained that he altered Acosta’s identity because of their many illicit adventures. Doctor Gonzo aided Acosta in finding publishers but complicated his telling of his own story.

In 1974, at 39, Acosta pulled an Ambrose Bierce and disappeared in Mexico. Thompson saluted his freak-kingdom fidus Achates: “Oscar was one of God’s own prototypes — a high-powered mutant of some kind who was never considered for mass production. He was too weird to live and too rare to die…” As your sidekick scholar, I advise you to pick up Fear and Loathing with an ojo agudo on Duke’s amigo, chase it down with Acosta’s The Autobiography of a Brown Buffalo and The Revolt of the Cockroach People, and see what transpires.