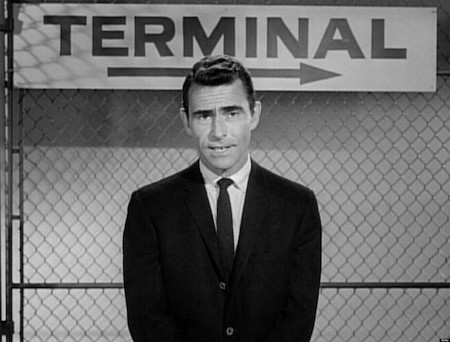 Submitted for your approval, an innovative storyteller and unabashed social observer named ROD SERLING (1924–75), who from October of 1959 to June of 1964 possessed the incomparable power to transfix, stupefy, and edify, altering a nascent entertainment medium with a foundational series, ushering television viewers into a crepuscular realm known as The Twilight Zone. Replete with arresting concepts and last-act twists, the show’s mysterious morality plays fused fantasy and sociology. Consider the frissons produced from a woman with a bandaged face, a pair of broken eyeglasses, a game of pool, an airplane-wing apparition, and a book by alien visitors with the title To Serve Man. The Twilight Zone captured America in its magic hour between Fifties certitude and Sixties surrealism. Serling was a kind of Cold War Nathaniel Hawthorne and his stories were like twentieth-century versions of such tales as “Young Goodman Brown,” “Rappaccini’s Daughter,” “Dr. Heidegger’s Experiment,” and the alt-historical “P.’s Correspondence.” He presented skewed and perceptive portraits of his time even as he raced ahead of it. Serling confronted mortality as a decorated WWII paratrooper and cut his teeth on television drama with his Emmy-winning Patterns and Requiem for a Heavyweight. The Twilight Zone was a comprehensive portrait of humanity in 156 episodes. Unable to get Richard Egan as his show’s narrator, Serling stepped before the camera as the Zone’s dapper ambassador, an uncanny cousin of Our Town’s Stage Manager, as essential to the show as Marius Constant’s unnerving theme. By the time Serling had gone on to write the Planet of the Apes screenplay (borrowing some of his own Twilight Zone tropes), create the occult-tinged series Night Gallery, and lend his voice to the opening narration of Brian De Palma’s Phantom of the Paradise, he embodied American otherness.

On his or her birthday, HiLobrow irregularly pays tribute to one of our high-, low-, no-, or hilobrow heroes. Also born this date: Annie Lennox, William Demby.