THE MOST DANGEROUS GAME (10) 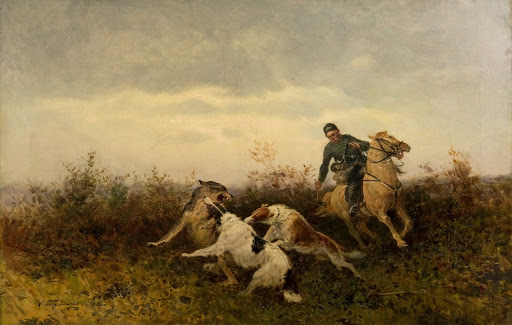 “You’ve done well, Rainsford,” the voice of the general called. “Your Burmese tiger pit has claimed one of my best dogs. Again you score. I think, Mr. Rainsford, I’ll see what you can do against my whole pack. I’m going home for a rest now. Thank you for a most amusing evening.”

At daybreak Rainsford, lying near the swamp, was awakened by a sound that made him know that he had new things to learn about fear. It was a distant sound, faint and wavering, but he knew it. It was the baying of a pack of hounds.

Rainsford knew he could do one of two things. He could stay where he was and wait. That was suicide. He could flee. That was postponing the inevitable. For a moment he stood there, thinking. An idea that held a wild chance came to him, and, tightening his belt, he headed away from the swamp.

The baying of the hounds drew nearer, then still nearer, nearer, ever nearer. On a ridge Rainsford climbed a tree. Down a watercourse, not a quarter of a mile away, he could see the bush moving. Straining his eyes, he saw the lean figure of General Zaroff; just ahead of him Rainsford made out another figure whose wide shoulders surged through the tall jungle weeds; it was the giant Ivan, and he seemed pulled forward by some unseen force; Rainsford knew that Ivan must be holding the pack in leash.

They would be on him any minute now. His mind worked frantically. He thought of a native trick he had learned in Uganda. He slid down the tree. He caught hold of a springy young sapling and to it he fastened his hunting knife, with the blade pointing down the trail; with a bit of wild grapevine he tied back the sapling. Then he ran for his life. The hounds raised their voices as they hit the fresh scent. Rainsford knew now how an animal at bay feels.

He had to stop to get his breath. The baying of the hounds stopped abruptly, and Rainsford’s heart stopped too. They must have reached the knife.

He shinned excitedly up a tree and looked back. His pursuers had stopped. But the hope that was in Rainsford’s brain when he climbed died, for he saw in the shallow valley that General Zaroff was still on his feet. But Ivan was not. The knife, driven by the recoil of the springing tree, had not wholly failed.

Rainsford had hardly tumbled to the ground when the pack took up the cry again.

“Nerve, nerve, nerve!” he panted, as he dashed along. A blue gap showed between the trees dead ahead. Ever nearer drew the hounds. Rainsford forced himself on toward that gap. He reached it. It was the shore of the sea. Across a cove he could see the gloomy gray stone of the chateau. Twenty feet below him the sea rumbled and hissed. Rainsford hesitated. He heard the hounds. Then he leaped far out into the sea….

When the general and his pack reached the place by the sea, the Cossack stopped. For some minutes he stood regarding the blue-green expanse of water. He shrugged his shoulders. Then be sat down, took a drink of brandy from a silver flask, lit a cigarette, and hummed a bit from Madame Butterfly.

General Zaroff had an exceedingly good dinner in his great paneled dining hall that evening. With it he had a bottle of Pol Roger and half a bottle of Chambertin. Two slight annoyances kept him from perfect enjoyment. One was the thought that it would be difficult to replace Ivan; the other was that his quarry had escaped him; of course, the American hadn’t played the game — so thought the general as he tasted his after-dinner liqueur. In his library he read, to soothe himself, from the works of Marcus Aurelius. At ten he went up to his bedroom. He was deliciously tired, he said to himself, as he locked himself in. There was a little moonlight, so, before turning on his light, he went to the window and looked down at the courtyard. He could see the great hounds, and he called, “Better luck another time,” to them. Then he switched on the light.

A man, who had been hiding in the curtains of the bed, was standing there.

“Rainsford!” screamed the general. “How in God’s name did you get here?”

“Swam,” said Rainsford. “I found it quicker than walking through the jungle.”

The general sucked in his breath and smiled. “I congratulate you,” he said. “You have won the game.”

Rainsford did not smile. “I am still a beast at bay,” he said, in a low, hoarse voice. “Get ready, General Zaroff.”

The general made one of his deepest bows. “I see,” he said. “Splendid! One of us is to furnish a repast for the hounds. The other will sleep in this very excellent bed. On guard, Rainsford.” …

He had never slept in a better bed, Rainsford decided.