THE MOST DANGEROUS GAME (3) 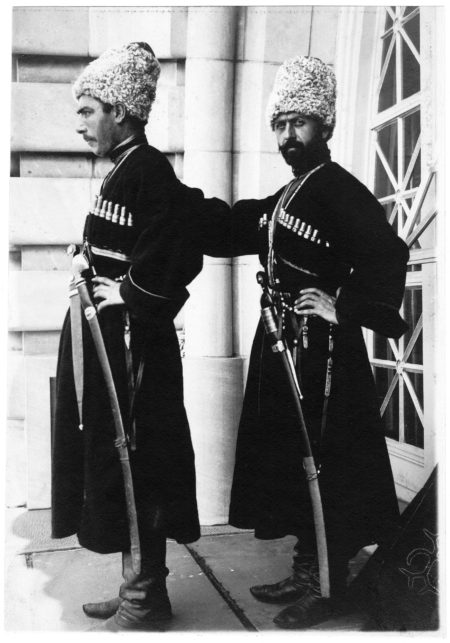 But it was no mirage, he found, when he opened the tall spiked iron gate. The stone steps were real enough; the massive door with a leering gargoyle for a knocker was real enough; yet above it all hung an air of unreality.

He lifted the knocker, and it creaked up stiffly, as if it had never before been used. He let it fall, and it startled him with its booming loudness. He thought he heard steps within; the door remained closed. Again Rainsford lifted the heavy knocker, and let it fall. The door opened then — opened as suddenly as if it were on a spring — and Rainsford stood blinking in the river of glaring gold light that poured out. The first thing Rainsford’s eyes discerned was the largest man Rainsford had ever seen — a gigantic creature, solidly made and black bearded to the waist. In his hand the man held a long-barreled revolver, and he was pointing it straight at Rainsford’s heart.

Out of the snarl of beard two small eyes regarded Rainsford.

“Don’t be alarmed,” said Rainsford, with a smile which he hoped was disarming. “I’m no robber. I fell off a yacht. My name is Sanger Rainsford of New York City.”

The menacing look in the eyes did not change. The revolver pointing as rigidly as if the giant were a statue. He gave no sign that he understood Rainsford’s words, or that he had even heard them. He was dressed in uniform — a black uniform trimmed with gray astrakhan.

“I’m Sanger Rainsford of New York,” Rainsford began again. “I fell off a yacht. I am hungry.”

The man’s only answer was to raise with his thumb the hammer of his revolver. Then Rainsford saw the man’s free hand go to his forehead in a military salute, and he saw him click his heels together and stand at attention. Another man was coming down the broad marble steps, an erect, slender man in evening clothes. He advanced to Rainsford and held out his hand.

In a cultivated voice marked by a slight accent that gave it added precision and deliberateness, he said, “It is a very great pleasure and honor to welcome Mr. Sanger Rainsford, the celebrated hunter, to my home.”

“I’ve read your book about hunting snow leopards in Tibet, you see,” explained the man. “I am General Zaroff.”

Rainsford’s first impression was that the man was singularly handsome; his second was that there was an original, almost bizarre quality about the general’s face. He was a tall man past middle age, for his hair was a vivid white; but his thick eyebrows and pointed military mustache were as black as the night from which Rainsford had come. His eyes, too, were black and very bright. He had high cheekbones, a sharpcut nose, a spare, dark face — the face of a man used to giving orders, the face of an aristocrat. Turning to the giant in uniform, the general made a sign. The giant put away his pistol, saluted, withdrew.

“Ivan is an incredibly strong fellow,” remarked the general, “but he has the misfortune to be deaf and dumb. A simple fellow, but, I’m afraid, like all his race, a bit of a savage.”

“He is a Cossack,” said the general, and his smile showed red lips and pointed teeth. “So am I.”

“Come,” he said, “we shouldn’t be chatting here. We can talk later. Now you want clothes, food, rest. You shall have them. This is a most restful spot.”

Ivan had reappeared, and the general spoke to him with lips that moved but gave forth no sound.

“Follow Ivan, if you please, Mr. Rainsford,” said the general. “I was about to have my dinner when you came. I’ll wait for you. You’ll find that my clothes will fit you, I think.”

It was to a huge, beam-ceilinged bedroom with a canopied bed big enough for six men that Rainsford followed the silent giant. Ivan laid out an evening suit, and Rainsford, as he put it on, noticed that it came from a London tailor who ordinarily cut and sewed for none below the rank of duke.

The dining room to which Ivan conducted him was in many ways remarkable. There was a medieval magnificence about it; it suggested a baronial hall of feudal times with its oaken panels, its high ceiling, its vast refectory tables where twoscore men could sit down to eat. About the hall were mounted heads of many animals — lions, tigers, elephants, moose, bears; larger or more perfect specimens Rainsford had never seen. At the great table the general was sitting, alone.

“You’ll have a cocktail, Mr. Rainsford,” he suggested.