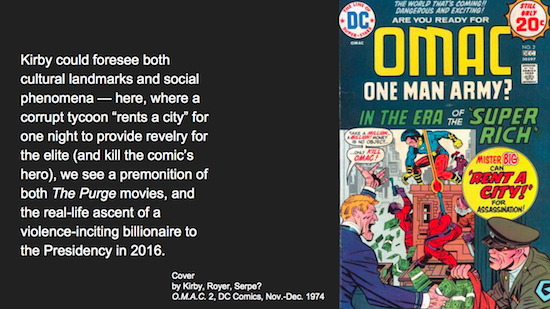 The future goes both ways — for those who need it to come to them. Definitive comic artist Jack Kirby (1917-94) designed whole universes of alternate time, phenomenally many of which have left their mark on the futures we ended up living. From his point of view on the front stoop of the 20th century, Kirby saw over the rooftops of his New York tenement birthplace to space travel, personal computing, dystopian dictatorships, even the return of the mohawk. Science-fiction opened his eyes, and he reflected the gaze in ways that showed millions things never seen before. Generations of filmmakers would harken to his creations while carving new paths; artists like the “Black Kirby” collective see a kinship between his first-generation, working-class Jewish worldview and the forging of the future in communities of color.

I delivered a slide talk, along with Jack Kirby Museum & Research Center founder Rand Hoppe, at the 2016 and ’17 editions of Wintercon, a sci-fi culture gathering in Queens, NY. Rand designed and contributed to the slide-presentation, revised and expanded from 2016’s version, and we talked about Kirby’s two-way influence on fictions and realities of tomorrow, with convention-goers who are studying — and living — the immigrant, Arab, Lesbian, Jewish, African-American and allied experiences. The projected part is presented here, and the discussions around what it summarizes can grow. We’re taught to think that time only goes in one direction — but what imagination offered Kirby, what the future meant to him, was a way out, a way onward.