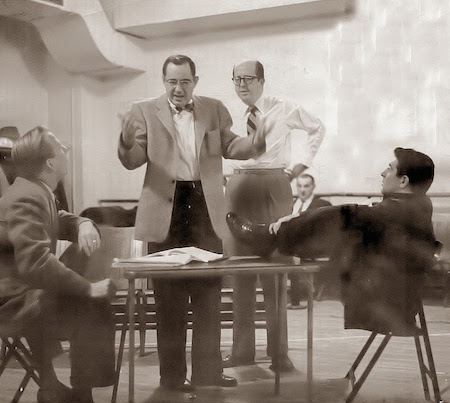 At 8:30 PM on Tuesday, September 20, 1955, CBS broadcast the debut episode of You’ll Never Get Rich, a peacetime Army comedy created by veteran radio and television writer NAT HIKEN (1914–68). Soon renamed The Phil Silvers Show and popularly known as “Sergeant Bilko,” the show revealed Hiken a comic genius of the highest order: W.C. Fields, the Marx Brothers, Preston Sturges. Like Sturges, Hiken loved densely woven scripts; riotous, often subversive satire and wondrously eccentric ensemble casting. It’s notable too that Hiken included black soldiers in Bilko’s platoon and, if underused, they’re never ill-used: they’re simply men like other men. Intellectual history highlight: “Bilko and the Beast,” wherein a sadistic drill sergeant is undone by the Freudian Theory of Inner Regret (as argued by Freud and Spinoza in Budapest). After two seasons of brilliance, Hiken, burnt-out, quit and while the program continued for two more years, mostly quite well, there were also moments of very un-Hiken-like gimmickry. At 8:30 PM on Sunday, September 17, 1961, Hiken was back, this time on NBC, with Car 54, Where Are You?, a show that in two seasons would reveal itself, episode-for-episode, as the greatest sitcom ever made. It was both multi-ethnic and also very Jewish: Molly Picon guests in three episodes; Hiken’s younger brother Gerald plays Katz the Butcher in seven; the voice of Al Lewis, Christ! In “See You At The Bar Mitzvah,” goyishe Officers — and Police Athletic League basketball coaches — Toody and Muldoon help one of their players celebrate the day he’ll become a man, despite his father being “Polcrass the landlord, most hated man in the Bronx.”

On his or her birthday, HiLobrow irregularly pays tribute to one of our high-, low-, no-, or hilobrow heroes. Also born this date: Anna Akhmatova, Joss Whedon, Alan Turing, June Carter Cash, George Russell.