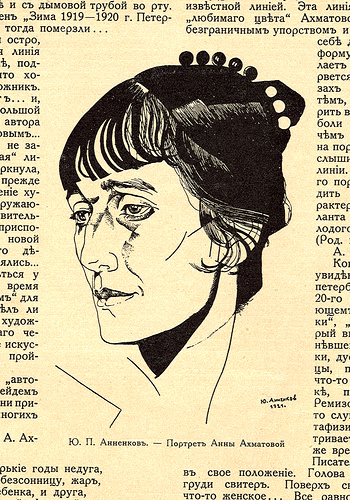 ANNA AKHMATOVA (1889-1966) was the Joni Mitchell of her day, strikingly angular and beautiful, wrapped in a Spanish shawl, tearing through love affairs with the celebrated poets and artists of her age. Her early work spoke directly to a generation of women, giving voice to the poised ambiguities of love. She was imitated as often as she was painted in portrait, and earned the high praise of a Nabokov parody. Brodsky said she arrived with her voice fully realized, working in a classical style in an avant-garde age, her work laced with precise imagery, irony and wit. But Joni Mitchell didn’t have Stalin for an an enemy! Akhmatova was too famous and beloved to attack directly, so from 1925 to 1940 she was banned from publication, her husband was executed and her son sentenced to a labor camp, and her friends were tortured and murdered. Though Stalin made her a ghost in her own life and in her own country, he could not still her voice: Akhmatova’s Requiem, an epic about the Stalinist terror, is the greatest work of 20th-century Russian poetry. In the end, she outlived her persecutor, enduring long enough to see her work come back into print in the Soviet Union.

On his or her birthday, HiLobrow irregularly pays tribute to one of our high-, low-, no-, or hilobrow heroes. Also born this date: | June Carter Cash | Alan Turing | Joss Whedon |