“I have done it. Damn the Admiralty. Not a life lost and we have been through Hell.”
— letter to Emily Shackleton

An occasional digest of Sir Ernest Shackleton’s Imperial Trans-Antarctic Expedition of 1914-1917, as told by @EShackleton on Twitter. 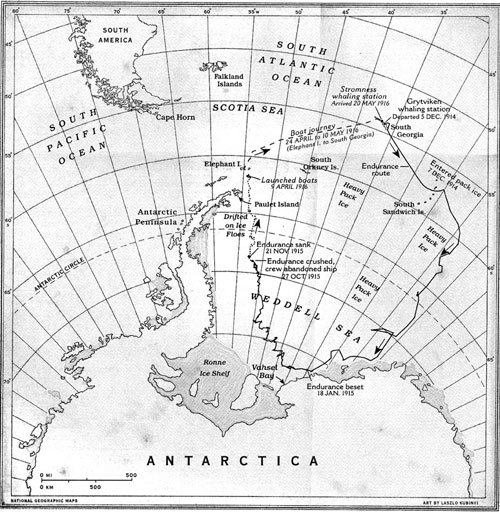 The story so far:

The ice floes broke up as the weather turned, forcing the stranded party into three longboats, to try their luck on the worst seas in the world. After days of rowing, freezing, and being blown backwards, all three boats reached Elephant Island—land, to be sure, but as inhospitable and bleak as possible, and more importantly, not in anyone’s way, not whalers, not explorers, not even the lost. Shackleton decided to take 5 men and one of the boats and attempt an 800-mile journey to South Georgia Island, the closest inhabited spot (taking into account the winds and currents). This meant almost certain death. But so did staying put. They launched, promising to be back within a month with help; the 22 men left behind had no choice but to endure, and believe. The Boat Journey, as it has since become known, is widely praised as perhaps the greatest navigational feat of all time. After 17 days they landed on South Georgia Island, the boat and men almost in pieces—but on the wrong side. South Georgia was only inhabited on its eastern shore; between the west and the east was an unmapped mountain range, considered uncrossable. Only three of the Boat Journey crew, Shackleton, Worsley, and Crean, were strong enough to attempt the impossible, once again. Hammering nails through their soles, with no map, no mountaineering experience, and also no choice, they started to climb…

After a harrowing 36 hours in which Shackleton let them sleep only once for 5 minutes, and retracing their steps several times when they went down the wrong mountainsides, they faced a vertiginous slope that disappeared into fog. But to stay at that altitude would have been to freeze to death, and they had no time to cut steps with their one carpenter’s adz. Roping themselves together, they launched off the edge, sliding down a thousand feet into soft snow instead of off a precipice, yelling the whole way with the thrill of it. Finishing their descent, they staggered into Stromness Whaling Station from the wrong direction, the station master demanding: Who are you? I am Shackleton, the Boss replied. Some say that the station manager turned away and wept.

Meanwhile, the men left on Elephant Island had had to perform an amputation on Blackboro, and food was growing so scarce that they were subsisting on limpets. They were starting to think the unthinkable, and the tobacco had given out long ago…

“For sudden the worst turns the best to the brave,
The black minute’s at end.”
—Browning, Prospice 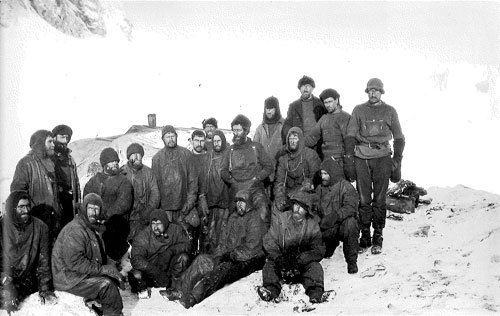 “I know that our food reserve is critical. I cannot reconcile myself to the happy go lucky hand to mouth style of saying ‘Oh it will be all right.’” “But of course, some of [Wild’s] remarks dont bear much analysis and he ought not to try & dupe me over the meat supplies for… it is truly a case of ‘telling it to the marines’.

“One cannot help but be a bit anxious about Sir Ernest. One wonders how he fared, where he is now and how it is that he has not yet been able to relieve us. The subject is practically taboo; everyone keeps their own counsel and thinks different, and no one knows just what anyone else thinks about it, and it is quite obvious that no one really dare say what they really think.” — Thomas Orde-Lees 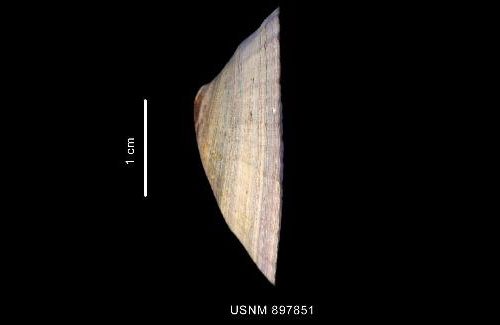 McIlroy’s poll: if you were allowed only one dish right now, but it could be any dish, what would it be? 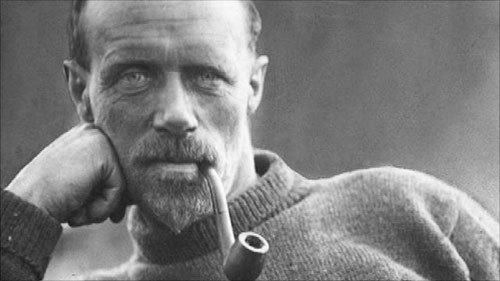 “Food is life and life is too serious a matter to risk needlessly. Strange to say, now that there really is a shortage the imperturbable pessimists are apparently quite unconcerned… It is not unusual that pessimism and equanimity are counterparts. The fatuous optimists exhibit their fears [by] assuming that the pessimists are now thoroughly scared and therefore making mocking remarks such as … “We shall have to eat the one who dies first” and so on, which has actually occurred before now when people have been in only very slightly worse straits than we are now. There’s many a true word said in jest.” —Thomas Orde-Lees

“Wild and I discussed who is to be sacrificed if all the food gives out. Orde-Lees is our first choice.” — Leonard Hussey

Marston set to making a smoke signal: blubber, sennegrass, and our single can of paraffin.

“Much blaze & explosion of can, but little smoke.” —Thomas Orde-Lees 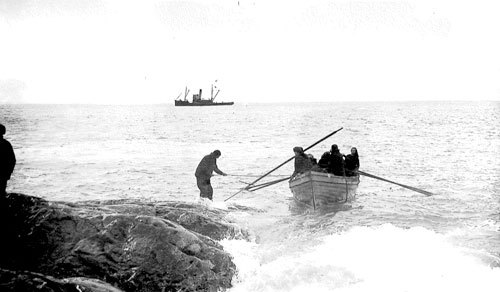 “He put his glasses back in their case and turned to me, his face showing more emotion than I had ever known it show before. Crean had joined us, and we were all unable to speak… It sounds trite, but years literally seemed to drop from him as he stood before us.” — Frank Worsley

“We intend to keep August 30 as a festival for the rest of our lives.”

“You readers can imagine my feelings as I stood in the little cabin watching my rescued comrades feeding.”

We disembarked, still in our filthy, wild state, and were marched through town at the head of a celebration parade with a brass band. 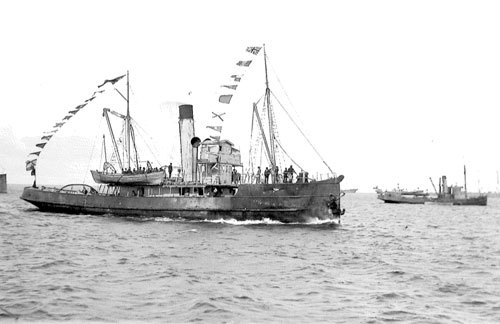 “All the plates which were exposed on the wreck nearly twelve months ago turned out excellently. The small Kodak film suffered through the protracted keeping but will be printable.” — Frank Hurley

After rescuing the men left on South Georgia’s west coast, thus proceeded four months of increasingly anxious rescue attempts for Elephant Island, thwarted by bad weather, encroaching pack ice, and politics. The fourth attempt, in August 1916, was perhaps the least likely to succeed, aboard the steel-hulled tugboat Yelcho, lent to Shackleton by the government of Chile but completely unsuitable for ice. In the end, they made it, rescuing every man and returning to a heroes’ welcome in South America. Yet upon return to England and the Great War, reception was markedly… subdued. Even, and perhaps especially after, the war’s end, Shackleton’s speaking tours were sparsely attended. Survival was not a popular theme after WWI; death took narrative precedence for decades. So the incredible story of the Endurance, one of the greatest adventures of all time, was of only marginal cultural interest until the very end of the 20th century, when interest Shackleton started to become a thing. Now his leadership lessons are taught at places like Harvard Business School, and there are new books, films and websites every year.

Were he alive today, the Boss would be pleased, no doubt. But even more, he would be itching to get away from civilization, back to the inhospitable and the unknown, to “boldly go where no man has gone before.” 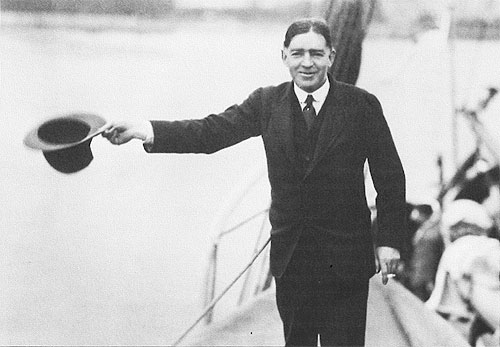 Note: Missed the beginning? No worries: @EShackleton’s Twitter adventure will set sail again in 2014 for the 100-year anniversary of the Expedition.