The surface of the ice is proving impassable, with pressure ridges up to two stories high, and soft snow causing men sink in up to their waists. Shackleton has come to a decision to make camp on the nearest flat, sturdy floe of ice, and allow the drift of the pack to carry them north and closer to land in the northwest. Teams go back to the ship daily to salvage what they can from the wreckage. Hurley insists his heavy, glass-plate negatives must be retrieved, and despite the extra weight that would entail, Shackleton agrees. Without the images there would only be their words to prove what happened, and words are not enough. Problem: the negatives have been stored in a refrigerator which is somewhere in a crushed cabin in the wreckage, itself under several feet of icy slush, and if anyone is going to try to rescue them, they are going to have to dive in…

“A sea of pressure, impossible to advance.”

“The surface was terrible — like nothing that any of us had ever seen around us before.”

“We were sinking at times up to our hips, and everywhere the snow was two feet deep.”

We will make camp here and let the drift carry us north, until the pack breaks up and we must take to the boats.

“Sir Ernest, Wild, Worsley & Self, who comprise a directive Committee, climbed some adjacent hummocks. The prospect was frightfully rough & the surface so soft we sank to our hips — under these conditions with the boats & large party further travel is impossible. The Quorum unanimously agreed to…camp…await the breaking up of the ice.” — Frank Hurley

“The rapidity with which he could adapt himself to altered circumstances and change plans to meet new situations…[is] one of his outstanding features.” — Macklin

“I decided to conserve our valuable sledging rations, which would be so necessary for the inevitable boat journey, and to subsist almost entirely on seals and penguins.”

“I like to think of our leader as I recall him at this time. His hopes & ambitions had all been shattered — yet he was cheerful & went out of his way to impart some of his cheerfulness to others. He had a genius for keeping his men in good spirits, & need I say more, we loved him like a father.” — Perce Blackboro

“We have made up our minds to stop on this floe until the ice stops.” — McNeish 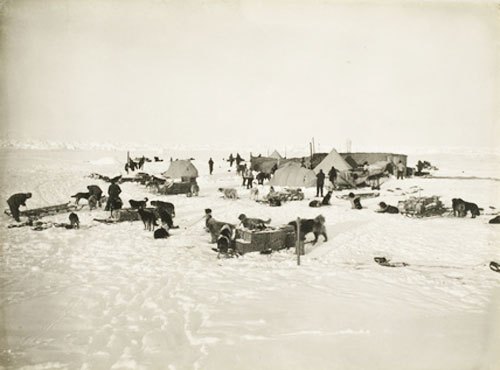 We’ve reached the only flat place in a sea of entropy.

Worsley estimates the age of this floe to be more than two years old.

Since we’re setting up camp for a time, the “2 pounds per person of personal effects” rule is suspended.

“A party was sent back to Dump Camp, near the ship, to collect as much clothing, tobacco, etc., as they could find.”

“The heavy snow which had fallen in the last few days, combined with the thawing and consequent sinking of the surface, resulted in the total disappearance of a good many of the things left behind at this dump.”

I sent Wild with a party of 6 back to the Endurance to salvage what supplies we could from the wreck.

We wanted nails. Any and all old nails as might be got, extracted from planks both over- and under-water.

We were also in need of farinaceous stores, such as flour, and dried peas, which could not be obtained from penguins or seals.

These were also underwater. And all passageways and doors had collapsed into impossible tangles of broken beams, rope, and ice.

Hurley had the idea of chopping right through the decks; a few crates immediately floated upwards. Others were fished out with boathooks.

“These were greeted with either cheers or groans according to whether they contained farinaceous food or merely luxuries such as jellies.”

And, certainly not least, we retrieved the third lifeboat. It took several dog teams several hours to drag it over the confusion to camp.

This evening, I ordered Green to put some lumps of blubber into the seal meat hoosh so that we might become accustomed to it.

Blubber is as unappetizing as one might imagine: rubbery, cod-liver-oil-flavored chunks that “maintain their integrity” in the hoosh…

Some of the men “ate around it.” At least this time. But mainly hunger ruled over fastidiousness, as it always, eventually, does. 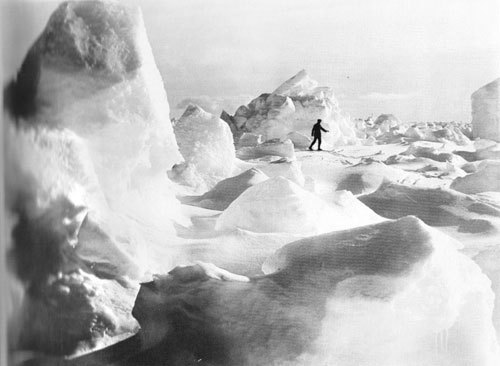 “…tumbled confusion to the west…” (in all directions, actually)

Hurley has reengineered us a new stove from the ship’s steel ash chute.

“The chipping of two holes fifteen inches in diameter with a blunt flat chisel was a somewhat arduous undertaking.” — Hurley

Wild brought back the entire wheelhouse from the ship, we are using it now as a galley to protect the stove.

It also “formed an excellent lookout from which to look for seals and penguins.”

Some shots from Hurley’s cine-camera: [video].

Hurley is absolutely insistent about rescuing his negatives.

Without the photographs, there will be no record to show the world what we have been through. We will only have our words.

He has convinced me.

Hurley and Seaman Howe have despatched themselves to the wreck.

“The darkroom was crushed in… the wreck was still held up by the pressure ice, and with one of the sailors I paid a visit… After hacking our way through the wreckage, we located the cases of films beneath feet of mushy ice…I tossed up with Seaman Howe as to who should dive in.” — Frank Hurley

“Bared from head to waist, I probed in the mushy ice.”— Hurley

Finally, well underwater in the freezing ocean-ice mix, Hurley located the ship’s refrigerator where the canisters were stored.

“The ice-clad cases were passed up one by one. The wreck was groaning under the pressure, but I kept saying to myself, ‘Keep cool!” — Hurley

“The ship is in a frightful condition crunched to fragments. She was entirely full of water & is merely held up by the ice pressure which has splintered the bulwarks almost severing the top deck. The port & starboard cabins are crushed together & all that remains of the sturdy Endurance is a squashed concertina like chaos of splintered timbers.

The cases which fortunately were zinc lined & soldered & contained the negatives in soldered tins I located submerged beneath 3 feet of mushy ice & practically all were intact.” — Frank Hurley

“I had sealed up the films I had already taken in double hermetically sealed tins.” — Hurley

Heavy, glass-plate negatives. Plus cans of moving pictures. He had saved them, but we couldn’t keep them all.

Hurley and I then began the arduous, painstaking process of selection and destruction, together.

We sorted for hours, weighing merits both compositional and documentary.

Due to weight and space considerations, we could only take what would fit in a single tin.

In the end, we chose 150 images, and all the moving pictures.

Of the 400 not chosen, we smashed them right there on the ice: to eliminate second thoughts, regrets, and any ideas of midnight retrievals.

Most of Hurley’s equipment is lost (& would have needed to be left in any case) but he did save a pocket camera and three rolls of film.

We must be judicious with our imagery from here on in.

Excursions back to the remains of the ship are now a daily occurrence.

Rope, tarps, wood, metal — anything portable, or that can be separated out from the mass.

Dump Camp had more an air of finality about it, than did the Endurance. “What’s in a name?” indeed…

“…over three hundred miles from land, and that quite hypothetical…”

McNeish is raising the gunwale of the big whaler out of nothing but used nails, thin air, and ingenuity, it seems.

“I have only a saw hammer & chisel & adze but we are managing all right.” — McNeish

“As long as we can come out of this predicament with our lives, we shall not grumble — and please God we shall succeed… My thoughts often turn to those at home, but as a rule I try not to think of anything but our surroundings.” — Alexander Macklin

“Shackleton was prepared for the worst eventuality of having to stop on the Pack for another winter… On the other hand if by the end of January we have, as is probably, drifted near enough to Graham’s Land, or the S. Orkneys, we may make one or the other by aid of the leads we hope to have come to… The third alternative is a risky but a necessary dash to the West at the end of Jan, abandoning boats but sledging the small punt the Carpenter has made. This we would only do if the drift became arrested … so … that we were fairly certain we would otherwise have spend the winter on the floe running the risk of it opening and crushing the boats some dark winters midnight.” — Frank Worsley

“Very anxious however to reach Snow Hill early this season so as to avoid wintering another year in the Antarctic.” — Hurley

“My sledge is… in perfect condition for leaving at a moment’s notice.” — Macklin

“I had to eat it to satisfy my hunger, but now my mouth is like a limekiln and I am almost parched with thirst.” – Macklin #hoosh #oops

“It is scandalous — all we seem to live for and think of now is food. I have never in my life taken half such a keen interest in food as I do now” — Worsley

“On one occasion a wonderful stew made from seal meat, with two or three tins of Irish stew that had been salved from the ship, fell into the fire through the bottom of the oil drum that we used as a saucepan becoming burnt out on account of the suddent intense heat of the fire below. We lunched that day on one biscuit and a quarter of a tin of bully beef each, frozen hard.” — Frank Worsley

“We each keep our own spoon and pocketknife in our pockets. We just lick them as clean as possible and replace them in our pockets after each meal.”

“Our spoons are one of our indispensible possessions here.”

“To lose one’s spoon would be almost as serious as it is for an edentate person to lose his set of false teeth.”

“We were rather short of crockery.”

Small pieces of venesta wood, jelly tins and biscuit-tin lids are all pressed into service, in addition to our pannicans (aluminum mugs).

“Each man by now had a good idea of the calorific value and nutritive and sustaining qualities of the various foods.”

“It had a personal interest for us all.”