Shackleton and his men have left the wreck of the Endurance and have begun the march across the ice floes to Paulet Island, more than 300 miles to the N-NW. Their course is anything but smooth — the surface is uneven, mushy, and subject to cracking, and some pressure ridges reach more than two stories in the air. Supplies must be kept to a minimum to conserve caloric expenditure, yet they must carry enough to live on for an indeterminate number of months, as well as drag the lifeboats, which will be their only option once the ice pack begins to break up. Shackleton gives the order that all the puppies, and the carpenter’s cat, Mrs. Chippy, must be shot. All animals making the journey must be able to pull not only their own weight, but the weight of the 1-ton sledges. Total miles covered: 2.

“It was pleasant to know that their minds were untroubled, but I thought the time opportune to mention that the tea would be the same for all hands and that we could be fortunate if two months later we had any tea at all. It occurred to me at the time that the incident had psychological interest. Here were men, their home crushed, the camp pitched on the unstable floes, and their chance of reaching safety apparently remote, calmly attending to the details of existence and giving their attention to such trifles as the strength of a brew of tea.”

Worsley has concerns about the plan. The “setting out immediately for Paulet Island” plan.

“[We should] camp on the nearest flat berg… & await the outward drift of pack & berg to open water.” — Worsley

No. We must away.

The drift of the pack might take us east as well as north, and east means away from land and into the open sea.

Perhaps even more, we must have purpose and activity.

Our interim goal was, of necessity, to wait; which is not a goal at all.

Our goal now, unwanted and forced though it has been, is real: to get home in one piece. All of us.

No one will find us here. “Here” is not even a place.

“The ship is still afloat, with the spurs of the pack driven through her and holding her up.”

The Endurance is now the-Endurance-and-the-ice: 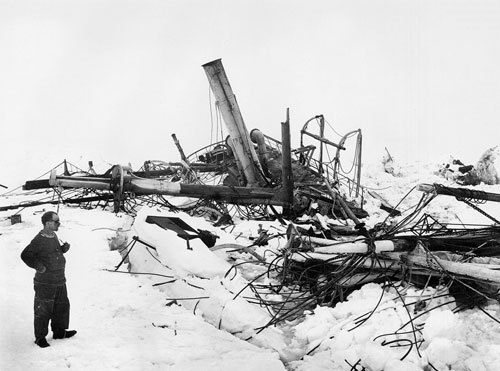 “Found water & ice up to a Ward room stove, fo’c’sle head under water a terrible sight — makes ones stomach ache to see it.” — Orde-Lees

“The decks are burst up by the pressure, the wreckage lies around in dismal confusion, but over all the blue ensign flies still.”

“Human effort is not futile, but man fights against the giant forces of Nature in a spirit of humility.”

Otherwise known as breakfast, lunch, and dinner. And tea. #hoosh

Make your own pemmican (and sledging biscuits): [coolantarctica] #recipe

“Out of whose womb came the ice? /And the hoary frost of heaven, who hath gendered it?”

That single page, the 23rd Psalm, and the flyleaf with Queen Alexandra’s personal inscription, I tore out of the bible.

Then I laid the book on the ice and walked away.

I have just told the men that we could carry only 2 lbs. each of personal effects on the march.

(Plus one pound each of tobacco. Natch.)

Weighed against survival, every ounce counted for naught.

I also emptied my pockets of their gold sovereigns, and my gold cigarette case.

“I rather grudged the two pounds allowance per man, owing to my keen anxiety to keep weights at a minimum, but some personal belongings could fairly be regarded as indispensable. The jounrey might be a long one, and there was a possibility of a winter in improvised quarters on an inhospitable coast at the other end. A man under such conditions needs something to occupy his thoughts, some tangible memento of his home and people beyond the seas. So sovereigns were thrown away and photographs were kept.”

The men followed my lead and began discarding items in the snow, a pile which grew as the afternoon wore on.

“It was an extraordinary collection of stuff.” — James

Exceptions must be made, of course.

I *ordered Hussey to keep his banjo.

“Holes had been dug in the snow for the reception of private letters and little personal trifles, the Lares and Penates of the members of the Expedition, and into the privacy of these white graves were consigned much of sentimental value and not a little of intrinsic worth.”

We could bring no animal that could not pull its own weight, and in fact much more.

“This afternoon Sallie’s three pups, Sue’s Sirius, and Mrs. Chippy, the carpenter’s cat, have to be shot.”

“Macklin, Crean and the carpenter seem to feel the loss of their friends rather badly.”

“‘The only thing I ever remember him saying … was Shackleton had shot his cat,’ says Norris.”

“We cannot hope to make rapid progress, but each mile counts.”

“I pray God I can manage to get the whole party to civilization.” [Shackleton’s private diary]

“Overcast and misty, with occasional falls of snow.”

Here’s how it works: we break a path through a pressure ridge. Then all 7 dog teams drag some of the sledges through.

Then they stop, unharness, go back, & drag the rest of the sledges through. Then back again, for the boats.

In addition we cannot go straight N-NW because we need to zigzag around the worst ridges and cracks. Some ridges are two stories high!

Despite everything left behind at “Dump Camp,” the sledges weigh more than one ton each, and are strained to the breaking point.

We’re only bringing two of the three boats, something else to which Worsley took exception.

“It was heavy work for dogs and men.” 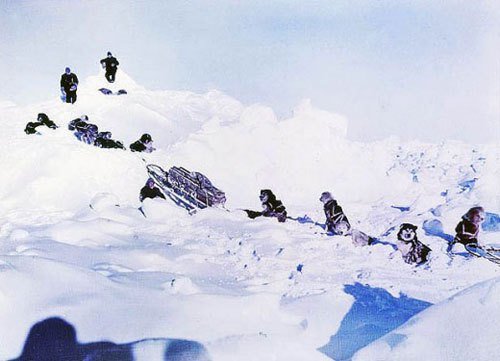 Killer whales surfaced in the cracks, sizing us up for a snack.

“All are in high hopes, & glad a start has been made from the depressing neighborhood of the Wreck.” — Hurley

“Although we had gained only one mile in a direct line, the necessary deviations made the distance traveled at least two miles, and the relays brought the distance marched up to six miles. Some of the dog teams had covered at least ten miles.”

BREAKING: a crack! Only 20 feet from camp.

Killer whales prowling and blowing all around us, all night. And underneath.

We have to risk it. There is nowhere to go.

“During the night the snow fell heavily, and the floor cloths of the tents got wet through.”

“But it is wonderful what a dozen men can do with picks and shovels!”

We are again essentially re-tracing our steps every thousand yards, with the whole party stretched out over a half-mile.

Orde-Lees is back and forth on ski, our march liaison officer.

“Do you know, I had no idea how quickly it was possible for a man on ski to get about. In that respect you’d have been quite useful on the trans-continental march; but that’s a thing of the past.”

“That set me wondering why he had not come to this conclusion long before and had not insisted on every man in the expedition being able at least to move on ski at a modest five miles an hour. Amundsen’s rapid journey to the pole was enough to convince one of the value of skis.”
— conversation with Shackleton, as reported by Orde-Lees

Terrible conditions for getting anywhere, today.

“I cannot help feeling sorry for Worsley at the mouth of our tent, for he gets the wet brought in by everybody.” — Macklin

“The rapidity with which one can completely change one’s ideas… and accommodate ourselves to a state of barbarism is wonderful.” — Worsley

“Many look on this as a spree. It is better so.”