Their ship, the Endurance, has been crushed like a walnut by the relentless pressure of the Weddell Sea ice pack. Shackleton and his men are stranded on unstable ice floes, hundreds of miles from land, and even further from civilization or any hope of contact with it. Shackleton must formulate a plan, any plan, about what to do next. 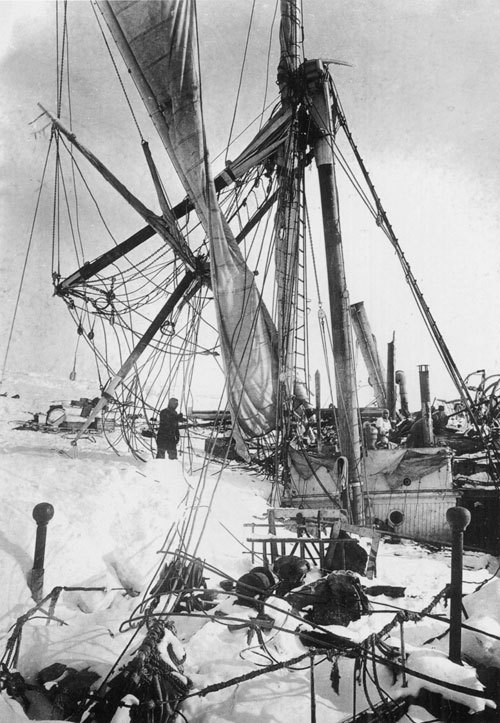 “The end came at last about 5pm. The pressure started again irresistibly. She was doomed: no ship built by human hands could have withstood the strain. I ordered all hands out on the floe.

It is hard to write what I feel.”

“The floes, with the force of millions of tons of moving ice behind them, were simply annihilating the ship.”

Several cross-beams have broken, the deck is buckled and the rudder is torn out.

“The driving floe, moving laterally across the stern, split the rudder and tore out the rudder post and stern post.”

Then, while we watched, the ice loosened and the Endurance sank a little.

The decks were breaking upwards and the water was pouring in below.

“Well Old Lady (one of my many nicknames) we’ve got it in the neck all right this time, haven’t we?”

“Well no, I don’t think so,” I ventured, “You wouldn’t have had anything to write a book about, if it hadn’t been for this.”

Where we came from, where we should be, where we were, and where we now needed to go: 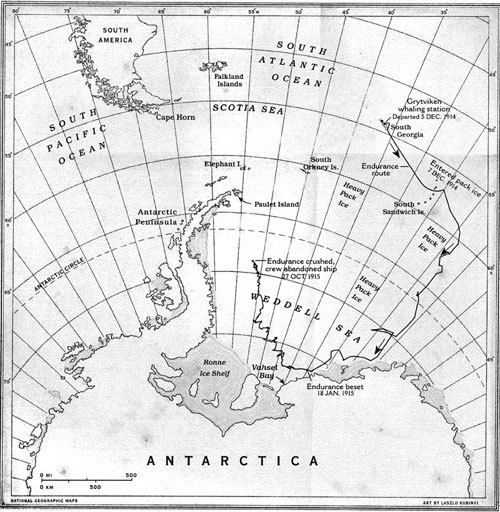 “A man must shape himself to a new mark directly the old one goes to ground.”

“Ship and stores have gone — so now we’ll go home.”

“As always with him what had happened had happened: it was in the past and he looked to the future.” — Macklin

“We are now 346 miles from Paulet Island, the nearest point where there is any possibility of finding food and shelter.”

“A small hut built there by the Swedish expedition in 1902 is filled with stores left by the Argentine relief ship.”

“I know all about those stores…”

“I purchased them in London on behalf of the Argentine Government when they asked me to equip the relief expedition.”

“The “Boss” called us all together and told us our true position and his intention.” — Blackboro

“…with the ship sullen dark against the sky & the noise of the pressure against her…seeming like the cries of a living creature.” — James

“The night was hideous in the extreme, cold & lit by the half grey midnight light we were hemmed in by crushing pressure on all sides” — Hurley

“Tonight the temperature had dropped to -16 degrees Fahrenheit.”

We managed to get the tents up but around 7pm, the floe began to “split and smash” beneath our feet.

We had to move the entire camp to a bigger floe about 200 yards away. across an active, raised pressure ridge.

“After a watch had been set all hands except the watch turned in.”

“For myself, I could not sleep.”

Near midnight, one of the pressure jolts gained purchase, and the floe split right through the camp.

It took an hour for us to transfer everyone and everything to the larger half of our split floe.

I continued to pace, with Wild and the night for company.

Hussey had switched the emergency light on when we left the Endurance.

“In the very early hours of the morning, there was a sound of rending beams and the light disappeared. The connection had been cut.” 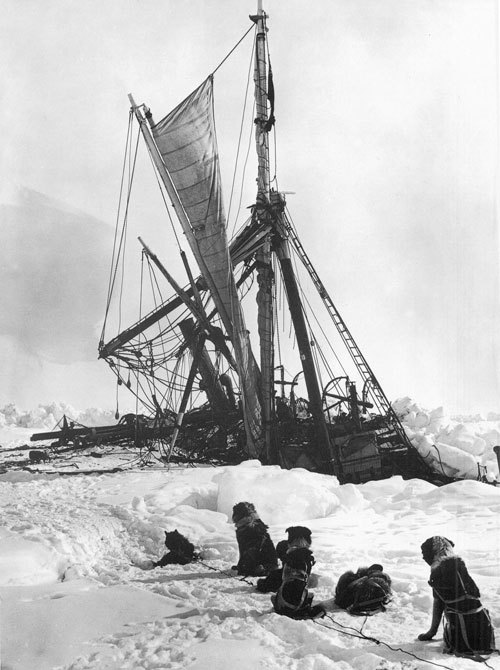 The ship presented a painful spectacle of chaos and wreck.”

After improvising a fireplace with part of a lifeboat and a 5-gallon drum, we ice-axed the tins of petrol and set them on fire. 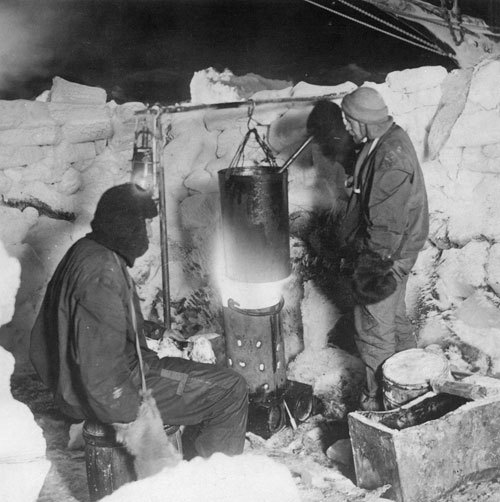 We need to move the camp again, immediately. This floe is still in the main line of pressure.

We’ve got to sort out the necessary supplies, what we need to bring, what we *can bring; what we must leave behind.

We brought only 18 reindeer-fur sleeping bags because only the shore party was expected to sleep outside to any extent.

We did have a quantity of Jaeger woolen bags, although they were much lighter and inferior to the fur in this climate.

“It seemed fair to distribute the fur bags by lot, but some of us older hands did not join in the lottery.”

I opted out of the lottery and took one of the woolen bags for myself.

Hurley has spent the day recording the death-throes of the Endurance with his motion-picture camera.

He caught the masts snapping from a new jolt of pressure.

And the crow’s nest almost caught Hurley, crashing down not 10 ft from where he was turning the handle.

“He did not stop the machine, and so secured a unique, though sad, picture.”

“The end of the Endurance has come. But though we have been compelled to abandon the ship, which is crushed beyond all hope of ever being righted, we are alive and well, and we have stores and equipment for the task that lies before us. The task is to reach land with all the members of the Expedition.”