Shackleton’s Imperial Trans-Antarctic Expedition aims to cross the Antarctic continent. Despite the South Pole being reached in 1912, the interior remains largely a mystery, one of the last. But the Endurance, which sailed from South Georgia Island despite warnings of the heaviest pack ice ever seen, has been trapped in the Weddell Sea for almost 8 months, “like an almond in a chocolate bar.” Shackleton and the men have been awaiting the Antarctic spring to loosen the pack and release the ship, while training the dogs, hunting, singing, engaging in amateur theatricals, and pursuing what science they can. But along with the hope of freedom is the promise of danger — the ice floes may loosen, but they may also compress, as the temperatures rise and the currents churn. The ship must break free — or be crushed like a walnut, abandoning the men to the unstable ice and almost certain death. 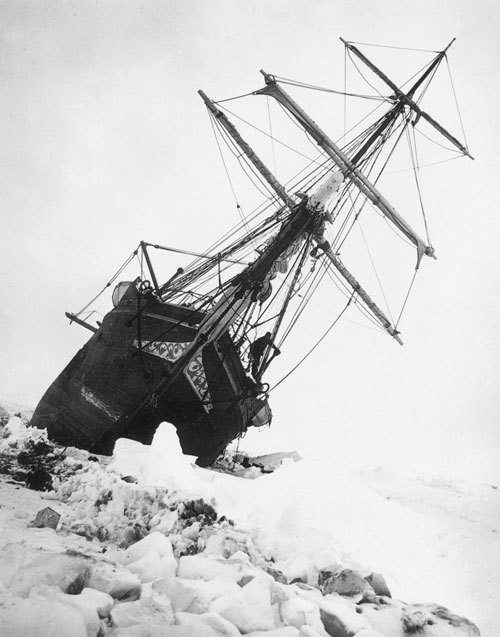 “I feel tonight a great desire to get back to work, real work, not messing about as I am afraid I have inevitably done this year.

“I’ll be blowed if I want to see any more ice as long as I live!

“I expect most of us feel the same, but we manage to conceal it fairly well nevertheless.” — James

The floes have seized the ship in a pincer movement.

Ironically — or aptly — this was how *I had intended to seize the Continent.

Instead it is we who are seized; and not, it would seem, for any greater knowledge; but instead made idle sport of by atmospheres and ice.

The stern port has torn away from the starboard planking.

Water rising rapidly in the forward hold, also in the engine room.

Worsley, with Hudson and Green, ventured below, to unfreeze the intakes.

The keel contained, besides near-total darkness and freezing cold, our entire quantity of coal, well mixed with the blubber of 60 seals.

“This… is not a pleasant job.” — Worsley

“Things look a bit serious. I have built a coffer dam in the engine room.” — McNeish

Strips from blankets torn to be used as caulking; the men helping out with the dam in between turns at the pumps.

I assigned a regular rotation of men going over the side with picks and ice-saws, to attempt to break free.

Any little progress was soon thwarted by the oncoming ice. #Relentless 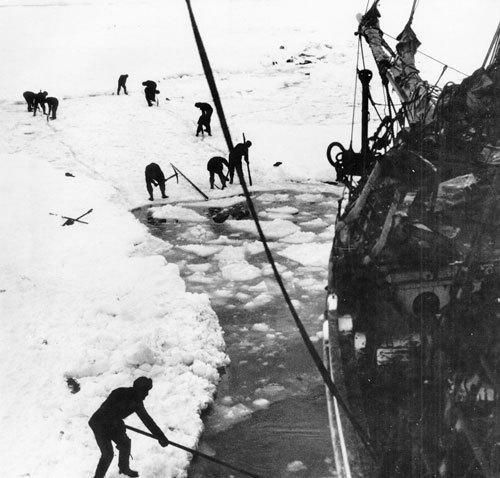 “The dogs…set up distressed wails of uneasiness & fear…

“Sir Ernest is standing on the poop calmly surveying the movements of the ice & giving an occasional peremptory order.” — Hurley

“The Endurance must have been built of good stuff…for the way she continued to resist was wonderful.” — Macklin

The pack is being subject to enormous compression somewhere well beyond our range of observation.

Whether this is due to cyclonic winds, opposing ocean currents, or constriction in a channel of some description, we can but guess.

“Huge blocks of ice, weighing many tons, were lifted into the air and tossed aside as other masses rose beneath them.

“…our lives dependent upon the play of grim elementary forces that made a mock of our puny efforts.

“We were helpless intruders in a strange world…

“From the crow’s nest there was no sign of land of any sort.” 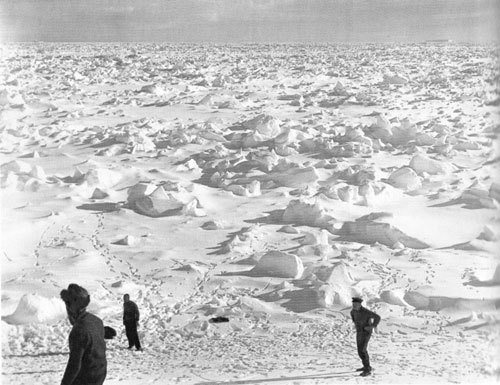 “The leak is being kept under fairly easily, but the outlook is bad.”

Hurley is everywhere between shift-breaks, taking photographs and cranking his cine-camera. 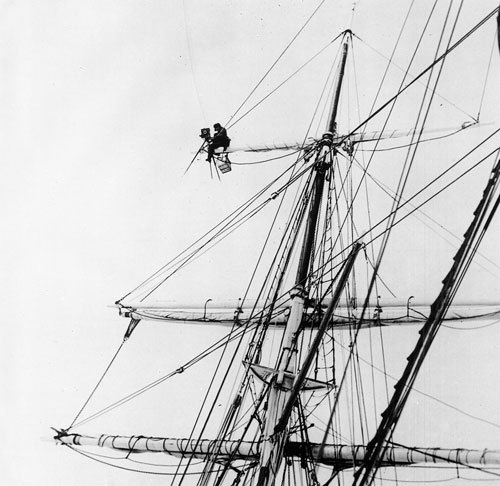 “Stores, dogs, sledges, and equipment were ready to be moved from the ship at a moment’s notice.”

The dogs have been sent over their side, sliding down a long chute of canvas set up for this purpose. 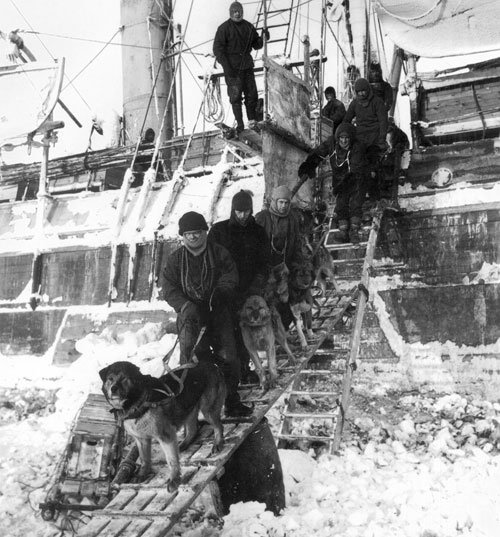 Dogs as well as men could sense the greater authority of the (ice) pack.

At the end of a shift it takes 10 minutes for our muscles to loosen enough for even a brief, exhausted sleep.

And seemingly 10 minutes later we must awake and begin again.

“Every muscle ached and revolted at the unspeakable toil.” — Macklin

“Listening below, I could hear the creaking and groaning of her timbers,

“the pistol-like cracks that told of the starting of a trenail or plank,

“and the faint, indefinable whispers of our ship’s distress.” 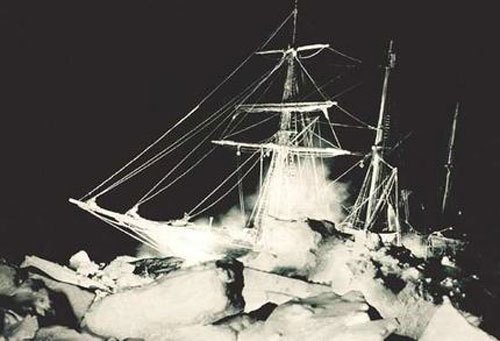 “We could see from the bridge that the ship was bending like a bow under titanic pressure.

“Almost like a living creature, she resisted the forces that would crush her; but it was a one-sided battle.

“Millions of tons of ice pressed inexorably upon the little ship that had dared the challenge of the Antarctic.

“She is slowly giving up her sentient life at the very outset of her career.”

“All hands are ordered to stand by to discharge equipment and stores onto the ice…The ship is doomed.” — Hurley

A most uncanny event.

A group of emperor penguins approached the ship and paused a short distance away.

Regarding us, they raised heads and beaks together and uttered a chorus of weird, mournful, dirge-like cries.

We had never seen more than a few emperors together, and never heard them utter more than single squawks and croaks.

“Do you hear that? We’ll none of us get back to our homes again.” — McLeod 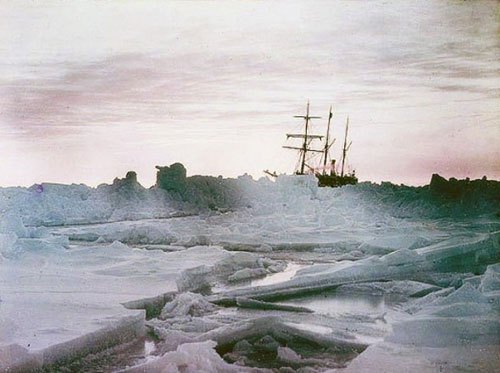 “The Endurance was apparently the nucleus of the disturbance,

“for we are surrounded by a labyrinth of grinding ridges and a maze of cracks of which she is the focus.

“It was a pitiful sight. To all of us she seemed like a living thing — we had sworn at her and cursed her antics in a seaway,

we had sworn at her and cursed her antics in a seaway, but we had learned to love her as we now realised…”

“It was awful to witness her torture.” — Macklin 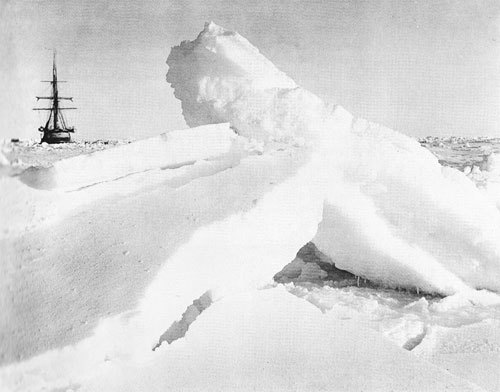 “I went down into the Ritz & … fearing being jammed by cracking beams returned speedily to the deck.” — Hurley

“Endurance is going to pieces fast the stern post broke…& then the keel was torn out of her then she filled rapidly.” — McNeish

“I don’t remember anyone telling us to stop [pumping], but we just seemed to understand that we might as well give up.” — Macklin

Imperturbably, Green has made supper.

We ate in silence, figuring rightly that this was our last meal on board. 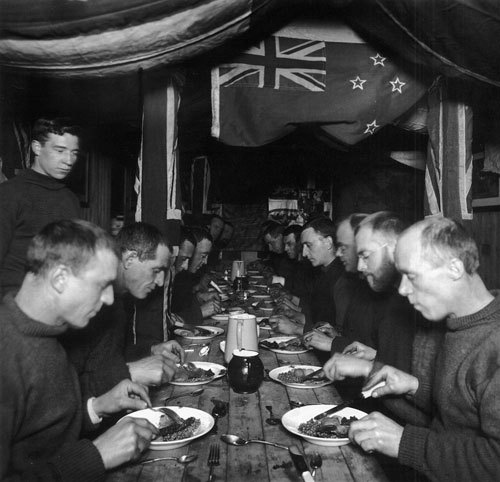