For many, Alan Turing’s 1950 paper “Computing Machinery and Intelligence” is the quintessential (and essentially hopeful) statement of the possibility of a conscious machine. It’s in this paper, published in the journal Mind, that Turing formulates his infamous test, a variation of a parlor game in which the imitation of human discourse is equated to conscious intelligence. Turing gave the problem compelling and intuitive form, but the question was hardly new. The modern preoccupation with intelligence and consciousness in machines reaches back to Descartes; and G. W. Leibniz gave the problem striking shape nearly two hundred and fifty years before Turing’s time, in proposition 17 of his Monadology:

Imagine there were a machine whose structure produced thought, feeling, and perception. We can conceive its being enlarged while maintaining the same relative proportions among its parts, so that we could walk into it as we walk into a mill.

Suppose we do walk into it. All we would find there are cogs and levers pushing one another, and never anything to account for a perception. So perception must be sought in simple substances, and never in composite things like machines.

Turing acknowledged the objection leveled by Leibniz, by way of analogy to a mind hiding in machinery like the skin of an onion:

In considering the functions of the mind or the brain we find certain operations which we can explain in purely mechanical terms. This we say does not correspond to the real mind: it is a sort of skin which we must strip off if we are to find the real mind. But then in what remains we nd a further skin to be stripped off, and so on. Proceeding in this way do we ever come to the “real” mind, or do we eventually come to the skin which has nothing in it? In the latter case the whole mind is mechanical.

Today we tend to correlate consciousness with complexity, taking the awesome neural interconnectedness of the human brain as our paradigmatic polestar. At some infinitesimal level deep within the synaptic warp and weft, many hold (indeed hope), computation imputes consciousness. There are fundamental objections to this perspective — most famously argued by the philosopher John Searle, who concludes that syntax-manipulating symbolic systems (like computer software) alone are unable to produce the semantic relations that, for him, are the sine qua non of conscious intelligence. It’s a big debate, tugging not only at the fabric of philosophy, but computer and cognitive science as well. Thus it’s interesting to note that for Leibniz, complexity was a quality that categorically precluded consciousness: the very manifold, hyperarticulate causal workings of the machine prevent it from converging in the quality of a pure “I” that is the quintessence of conscious being. Leibniz gave the name of entelechy to those simple substances which, to him, were self-sufficiently (and it must be said, tautologically) perfect enough to produce consciousness.

For Turing, consciousness emerges from machinic complexity; for Leibniz, as complexity increases, the possibility of intelligence recedes. Two worldviews, both fixed on the machine, drawing opposite conclusions. 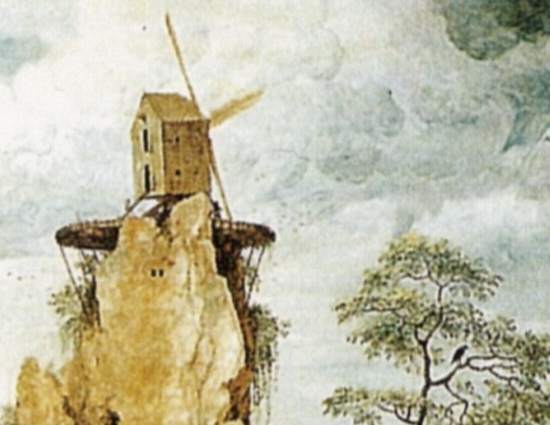 With a short piece of annotated video I’ve illustrated Leibniz’s thought experiment, drawing upon a scene from Lech Majewski’s extraordinary 2011 film The Mill and the Cross that beautifully evokes the arresting philosophical richness of Leibniz’s Mill. Now, Majewski’s film doesn’t have anything to say directly about artificial intelligence; the painting that inspires the movie, Pieter Bruegel’s Christ on the Way to Calvary, was painted two centuries before Leibniz’s time. In the film, Bruegel (played by Rutger Hauer) posits the mill in his painting as a kind of mechanical axis mundi, its stones inexorably grinding our affairs; God the miller keeps the machinery working, but never intervenes in the sowing, cultivation, and winnowing of our sublunar affairs. Down here, suffering and injustice continue, mere grist for the mill — manufactured in the black-boxed entelechies of conscious minds, upon which no machine can operate.

(The piece will only play in Chrome. In the YouTube version of the movie, the scene showing the inner workings of the mill begins at the ten-minute mark. I strongly recommend the entire film, which available via Netflix.)