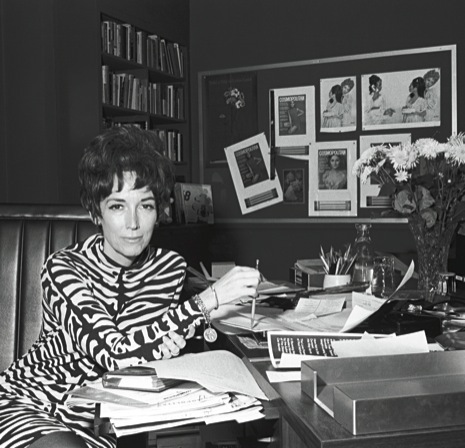 Publishing doyenne HELEN GURLEY BROWN (born 1922) worked as a secretary in seventeen different offices before she joined the advertising agency Foote, Cone & Belding. When her boss, Don Belding, allowed her to write ad copy for the Sunkist Orange account, a career was born: by the mid-1950s, Helen Gurley was one of the top-paid female copywriters on the west coast. At what was then considered the advanced age of 37, she married movie producer David Brown. She published her first book, Sex and the Single Girl, in 1962, and took over the editorship of Cosmopolitan three years later. The rest is history.

Fans of Mad Men will recognize much of girl copywriter Peggy Olson’s career trajectory in Brown’s biography; the show’s creator, Matthew Weiner, urged his writers to read Sex and the Single Girl, along with other contemporary office-themed fare. Remember the scene in which Sterling Cooper’s young execs chase and tackle secretaries to check the color of their panties? Brown fondly remembered “scuttle,” the “dandy game” played by her officemates at a Los Angeles radio station in 1940, which she first wrote about in Sex and the Office (1964): “Rules: All announcers and engineers who weren’t busy would select a secretary, chase her down the halls . . . catch and take her panties off. Once the panties were off, the girl could then put them back on again.”

Not surprisingly, given her relaxed attitude towards forcible panty-removal, Brown viewed the office as sexual playground, where “a bit of lace [slip] peeking out below a slender sheath skirt” during dictation was “fascinating,” not forbidden. But she also urged her readers to value both intelligence and competency, a rarity at a time when guidebook authors often suggested a secretary hide her brains lest they intimidate her boss. True, Brown couched her advice in man-getting terms — but at least part of her message was refreshingly different in an era that valued female submissiveness across the board. “Being great at a terrific job is sexy. You are far more intriguing than a drone or a slug.”

On his or her birthday, HiLobrow irregularly pays tribute to one of our high-, low-, no-, or hilobrow heroes. Also born this date: Yoko Ono.