A Border is No End

I thought of you the other day when the smell of mushrooms brought me up short at the cemetery gate — an aroma that rose in thin streams from the bordering woods, calling to mind that rain-bright day one Spring when you showed me the way to the oak thicket where the morels stood out from the leaf mould in their legions. Intimate ranks of cone-shaped, brainy mushrooms, bitter in the loam, savory as wine. I think of you too because we often talked about walking here together, as if the native dead would help you see the city as I see it, would help me — like invisible valets and handmaidens in wonder tales — to compose a home for you here. It seems preposterous now I know, that image I had of us: walking arm in arm in perfect amity, murmuring to one another like fragile transcendentalists kept safe from the city by stones and fences.

You’re far away now, tasting other scents. The morels I remember smelled washed, cleanly; at the cemetery, the fungal aroma was ambiguous as the shoveled earth. It carried to me a satisfying memory of you, but also a sensible echo of the death which the cemetery already figures and hymns abundantly, perhaps to excess. There in the gloom where the woods give way to path and the first disordered ranks of old gravestones rise, a great patch of trodden-down mushrooms glowed cabbage-white in the turf. Suddenly I had a vision of the vast buried body of fungal hyphae — the tender web of flowing threads probing, feeding, and interconnecting the crashed-in, chaotic spaces of the many graves. 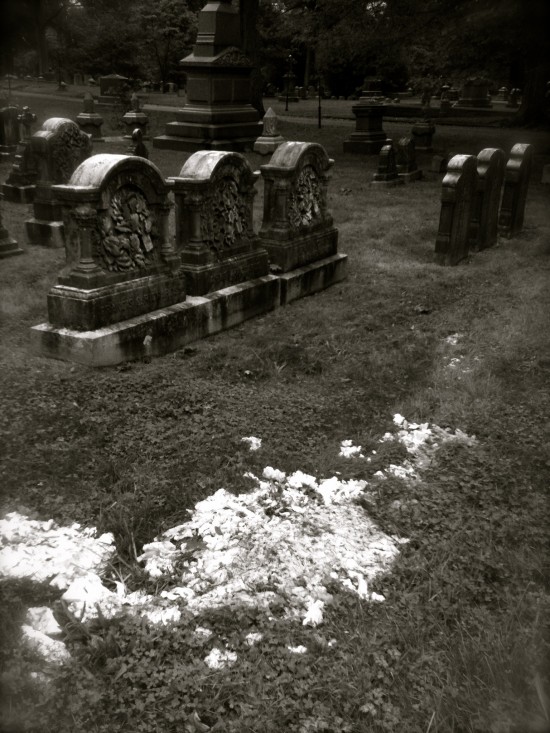 Two things come together, they bump up against one another, and another thing is created — a gap, a space, a ni l’une ni l’autre— a border. They’re casuists, are borders, with their endless dichotomizations, their splitting of hairs, their endless ontological agon. Especially with death we insist upon a border, a space of interpenetration, beyond which lies the unmistakably other, inviolable and uncanny — Unheimlich, as the German has it: un-home-like. Unto other borders, this one is antecedent and evocative.

Barrows, tombs, crypts, burying grounds — in these places of the dead, how the borders do proliferate. We place them there as customs houses, cordons, guardhouses at the border; we want to wall, to delimit, to legislate as it were a rigid separation of sovereignties: life here, death there. And yet everywhere, the burgeoning gap — as your absence, which is a kind of death, a precedent and prefiguration of utter separation. Into the gap we throw more borders, like mattresses into a whirlpool to stanch the flow — for there is a flow, a tide of separation and alienation. The estrangement of life and death is not static; there is only a ceaseless immigration. Our visas are stamped, every one.

How borders breed borders, how they cleave: the chapel, the gate, the road, the plot, the stone, the grave, the sarcophagus, the coffin. In the grave, finally, the awful and intimate mystery of transubstantiation: the clean-cut borders of earth and body confounded, the border-making molecular, the metabolic apotheosis, the final collapse of antinomies in a cascade of action potentials. And yet in it all, the edge proves elusive, the giving over of one to the other is fractal and profuse. It’s borders all the way down. On this side, the borderings proliferate: the little stone and brass markers, stamped “perpetual care,” that delimit the corners of burial plots, property lines that settle questions: who will mow and tend. The stone which is also an entryway, a gate, a door — but one that is pulled to, its myriad mineral bolts thrown home, the stone a door that wants to be a wall. 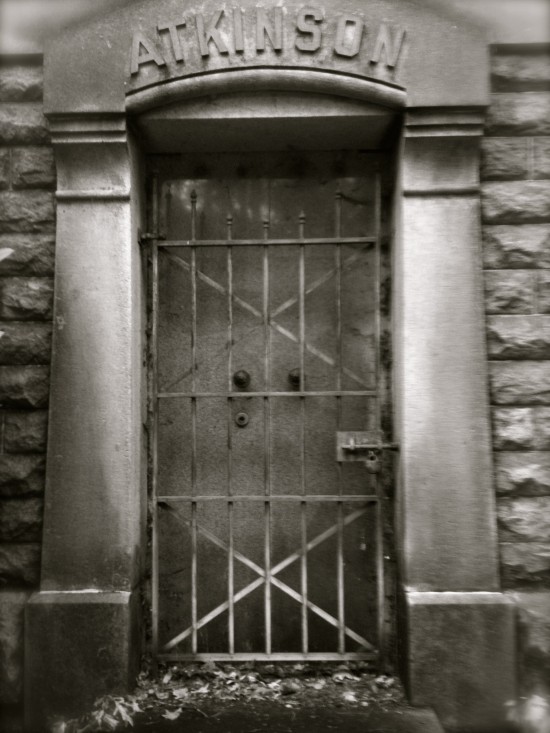 Remember the Roman graves we saw in Italy? well out of the city, in the tended ruins of the imperial port, the distant sea a line of gnashing teeth; along the remains of the ancient road, graves lined the way, their profusion tracing a custom that must have originated with a need to put the bodies outside the city, to sequester them in the wastes beyond the walls, traveling further and further through the numberless generations until the road teemed with gravestones like storefronts all the way along the road from Rome to Ostia by the sea.

Back in Boston (how hemmed-in you felt here, how province-bound, how bruised by limits): here too, the dead teem. Or they don’t teem, they refuse to; they keep the border inviolate, only teasing us with their proper, insistent absence. Already by the end of the eighteenth century, their borderlands were filling the city, and not only the pocket burying grounds with headstones of puritan slate, grave in both senses; in the bowels of the churches, the crypts filled up with parishioners and with outsiders as well, the final mingling of mundane borders in the teeming port city. And on the Common, a great brick-fronted barrow swelled with the burgeoning dead.

Here in the outer neighborhoods, towns swallowed in a swell of municipal satisfaction, the rolling garden cemeteries gathered to limn the old city limits like a wrack of tide, rambling necropolises that mirrored the city in negative. In these sprawling, arboraceous grounds, family plots spread beneath weeping beeches: each one is defined and defended by a fence of stone, murmuring and low, insistent on the borders of clan and consanguinity even in death. A gothic translation of the Victorian family home. 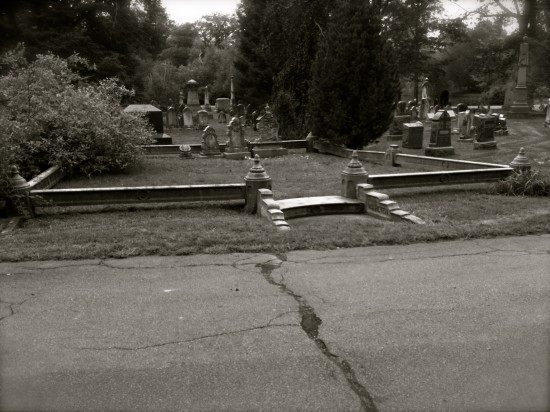 I think of your sister — how when she was dying, when the metastases were clawing out the last of her, her vitality seemed to gather itself for a final stand. She jumped to attention in the middle of her bedroom, reached out as if clawing through some kind of screen. Let me in, she cried. Let me into the house!

You’re in the house, you said softly, taking her hands; you’re already in.

Here, on this side of the door, we keep the absence; it belongs to us, the living, bequeathed to us with stones and memories and the scent of mushrooms. Perhaps all borders are reducible to our fear of this the final one; just as our losses — when will I see you again? — our losses only haunt us to the extent we let the prospect of our final and irrevocable exile diminish us. There are borders and there are borders — those which fence and delimit, and those which acknowledge the gap. 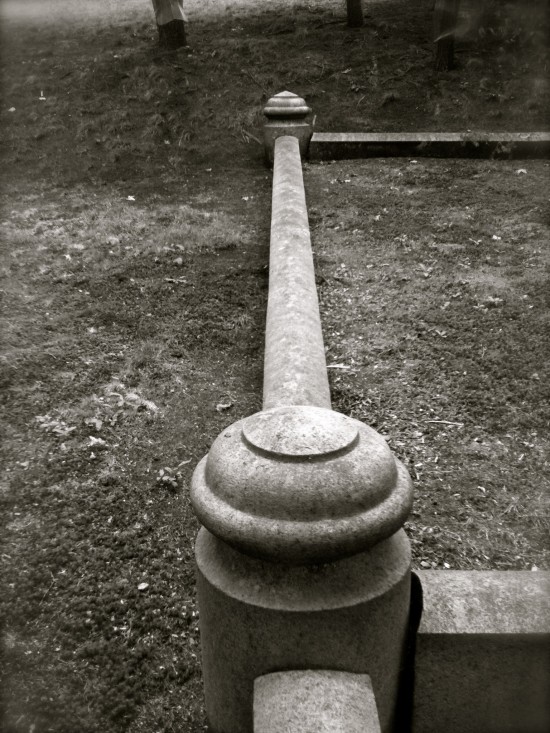 This post is HiLoBrow’s second contribution to Border Town Online, a digital complement to the Border Town Design Studio on exhibit in Detroit through today. You can find the rest of the posts at dividedcities.com.