P-Funk cosmology is based on the idea that Funk was brought to this planet by an alien race at various points in human history.

Initially parodying the ideas propagated by Black nationalists like the Nation of Islam and later iterations of Afrocentricism, George Clinton found aliens a useful metaphor for manifesting his ideas. In 1970, he introduced the alien motif in the song “Mommy, What’s a Funkadelic?”, singing “my name is Funk/I am not of your world/Hold still, baby, I don’t do you no harm/I think I’ll be good to you.”

[This is the third in a series of posts about P-Funk’s Afrofuturism.]

Pedro Bell ran with the idea when he joined the group a few years later. He always depicted the band as the Invasion Force and offered imaginative portraits of each member as a cosmic being. 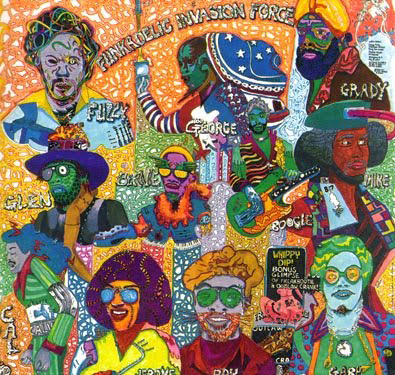 Fuzzy and Gary are not even made of physical material. Bell depicts them as made of anti-matter or electromagnetism.

Bell’s work conflates the spiritual with the physical by offering new ideas of what aliens look like. He depicted aliens of all shapes, sizes and materials. His palette for alien skin-tone was always colorful.

He painted P-Funk band members without regard to ethnic heritage, thus offering his predominantly African American audience an opportunity to try on the idea of transcending their own skin color, an idea Afrofuturism literature frequently explores.

Meanwhile, Parliament’s party band identity crafted a more literal mythology. Clinton introduced the Starchild (Starchile) character on the Mothership Connection album. His arrival from space is depicted on the LP’s front and back covers. He is a brother from another planet commissioned by his mentor, Dr. Funkenstein, to bring Funk to humanity.

Dr. Funkenstein eventually joins Starchild and unleashes his clones. Dr. Funkenstein meets his antagonist, Sir Nose Devoid of Funk, who resists the Funk and battles with the Doctor and his companions. Garbed in Egypto-glam-space-pimp-wear, these figures have African American features and hair styles.

Parliament was also one of the first creators to introduce into mainstream pop culture the narrative that aliens jump-started Egyptian, and by extension African, civilization. Many had been captivated by Erich von Däniken’s 1968 book, Chariot of the Gods, but P-Funk took the idea further and pushed a more Afrocentric agenda than Däniken.

Aliens and alienation are key features of Afrofuturism. Bell’s aliens were not alienated from their place in the world. Funk offered the promise of feeling at peace with the universe; a condition that often eludes African Americans.