James Bridle’s reference to Soylent Green in the item we reposted yesterday reminded me of an essay I had started about the film a couple of weeks ago and then abandoned. In it I was writing about the role of books, writing, and memory in Soylent Green; inspired now to give it another look, I’m pulling it together here below. The “elixir of remembering,” the mystical gift of Theuth, which James’ post evokes, plays an important role in the film, as I realized while re-watching it recently. With its famous tagline, its Malthusian orthodoxy, and its famously problematic foodstuff, Soylent Green is a 1970s dystopian freakout and an undisputed science fiction classic, part of the troika of hardboiled “futuresploitation” roles that make up the unique SF legacy of Charlton Heston. The film is best remembered for its Ehrlichian vision of a future in which overpopulation and pollution contrive a bleak existence for most people living in a hot, crowded world. But it’s not often remembered that Soylent Green is also a parable of the information age.

Directed by Richard Fleischer, whose projects ranged from astringent noir vehicles like Bodyguard to the light, avant-la-lettre steampunk of Disney’s 20,000 Leagues Under the Sea, Soylent Green is one of those rare science fiction films without special effects. This puts it in a strange category with Werner Herzog’s recent Wild Blue Yonder and Tarkovsky’s Stalker (which, to be fair, contains precisely one special effect, held for the very end). These films hold deep appeal for me, if only because they let me believe that I could make such a film. In one of the Soylent Green’s most salient themes, it imagines a future that lacks technology beyond that available in the early 1970s — a vision of future decadence, with postwar America, the era of finned automobiles and air-conditioned grocery stores, as a lost and dimly-recalled Golden Age. Throughout the film, this technological decay is signaled in a variety of ways, some amusing (as when the riot police don what appear to be surplus high school football helmets). But one of the chief signals of this decay appears in the kinds of writing tools and communications media available to the characters.

The movie opens on Heston’s police detective, Thorn, awakening in a stuffy apartment and switching on a portable TV. Like any crappy mid-seventies Magnavox, the set takes a few seconds to warm up; in the frequent blackouts, its power comes from a bicycle-driven generator rigged up in the apartment by Thorn’s housemate, Sol. 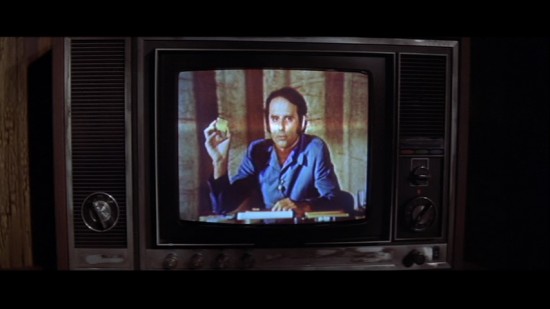 The poignant last turn of Edward G. Robinson, Sol is a police “book”— a superannuated academic who now mines the shattered archives to dig up information for police investigations. His part of the apartment consists of a small library of worn and broken old volumes. Like the book-keepers of Farenheit 451, books like Sol seem to serve the semi-official function of preserving a broadly-conceived literary — not merely the reading of letters, but all the codes and practices of the age of the book. When the people of Soylent Green need to write, they don’t use paper, but versions of the wax-and-plastic magic writing pads often sold (in the seventies, and to this day) as playthings for children. Their ephemerality is troubling — little written in the world of Soylent Green is fated to last. But with the magic writing pad, there’s more: Freud wrote a famous essay about these writing toys, in which he saw a metaphor for the fickle, permeable palimpsest of human memory, which preserves only veiled, overlapping traces. And forgetting is the tragedy of Soylent Green, whose characters have all but forgotten not only the taste of food but the feel of the breeze and the cleanly smell of the ocean. 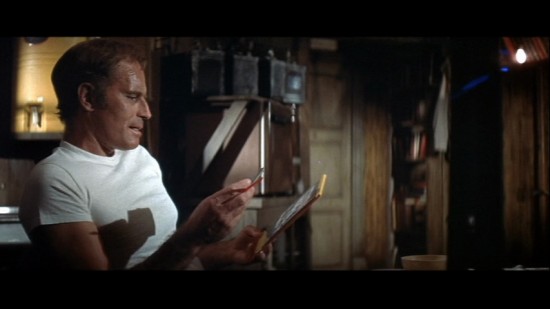 When Thorn returns from the scene of the murder that furnishes the movie with its central mystery, he brings Sol a bag of gifts, rare treasures pilfered from the home of the assassinated rich man. They include sheaf of paper and “real pencils,” which Sol regards with wonder. The chief prize, however, is a pair of richly-bound folio volumes in mint condition. They contain oceanography data from the Soylent Corporation, but at first their contents seem of little moment — to Sol, the prodigy of the book is balm enough. “There used to be paper, and ink, and power enough in this country to print millions of books,” he exclaims. Later, he delivers these sacral tomes to his fellow books — a clear-eyed cabal of aged worthies ensconced deep within the ragged stacks of a library. With their sad faces and their Mitteleuropean accents rather shamelessly calculated to evoke the Holocaust, these characters discern the true nature of Soylent Green hidden in the books. 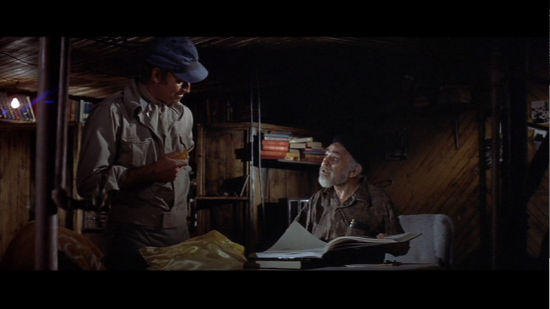 What’s most striking about Soylent Green today, of course, is its vision of a future without an Internet; the movie imagines a future lacking not only an advanced information network, but computers of any kind. (Ironically, the movie’s success occluded a book —Make Room! Make Room!, Harry Harrison’s 1966 population-bomb dystopian novel, upon which the film was based). The lack of computers is a fascinating omission — the movie was savvy to global warming, after all, so prescience wasn’t utterly beyond its means. From a narrow science-fictional perspective, it seems a colossal failure of the imagination in a film made just a couple of years after the invention of the microchip and in the midst of the Apollo era.

Considered as a choice, however, and not an oversight, Soylent Green’s lack of computers becomes interesting. There’s no mention of a space program in Soylent Green, no word of daring, far-off astronauts offering hope or distraction to the hungry, restless populace. The technology of Soylent Green isn’t only on par with that of the 1970s, it’s worse. There’s a thoroughly valid kind of futurism in asking the question, “what if the tools we have right now are advanced as technology gets?” Soylent Green gets interesting when viewed not as a future imagined without an Internet, but as a future that had an Internet — and lost it.