In the first episode, our narrator recollected a troubled family vacation at an old house by the sea, and the distraction provided one evening by the discovery of an uncanny camera which, rather than photographing its intended subject, produces images of unknown people and places faraway.

The next morning, my father drove into town looking for a place that carried the right kind of film, while my mother sat at the long dining table and looked over the photographs made by the camera. She was shuffling them before her as if they were a game of solitaire.

I asked what she was looking for, but she didn’t want to talk. “Did you have your breakfast?” she asked. “Then why not go for a sail?” she continued at my nodding reply. “The tide is coming in.”

Though her faraway tone made me curious, I wordlessly complied. As she was occupied with the photographs, I slipped the camera from its place on the lampstand and took it along. The little window indicated there was one shot left, and we had no replacement film as yet. But I wanted to discover what I would find the next time I pushed the shutter button.

I had learned to sail in summer camp, and although the boat was new to me it readily disclosed its secrets. On the grassy bank by the water I stepped the mast and unfurled the sail. Laying the camera carefully in the little forward cuddy cabin, I pushed the boat into the turbid water, tucked into the cockpit, and set a long reach across an elbow of tidal current where it bent to cradle the nearest island.

I sailed a long while in that uncentered labyrinth, the white pile of the house dipping and hiding as I tacked amidst the bars and islands hemmed in by the far-off surge of surf. I only turned back when the centerboard began scraping the sand as the tide ran out. Heading homeward, I stopped on the near island and removed the camera from the latched cuddy. Standing on the shore, I quickly aimed at the house and snapped a photo. When the image at last appeared, it showed the house as I was looking at it, with — and this I had not noticed while taking the picture — my father standing amidst the long grass by the water with his hands upraised. I looked up across and there he stood, still waving, his shouts a rumor on the water. I waved the oddly accurate photograph at him as if he should see it over the distance and then quickly shoved off for home.

He was furious. “You took the camera?” he spluttered.

“It’s special!” he shouted. “It’s very special — very special. It shouldn’t be taken out of the house.”

I turned the photograph over to him. He looked up and gazed across the outflowing water to the island as if to make sure it was there.

“A very special camera,” he mumbled, turning and walking up the grass. Flicking a look back over his shoulder, he said, “bring it now.”

But we did take it out of the house, and soon. Over the next few days it was our family’s entire business to investigate the ways of the camera. We had already discovered that beyond the house it took pictures of the scene it was presented with; only inside did it reveal other locales and unknown persons. One day we took the camera with us on a drive to the village nearby, shooting entirely conventional pictures of ourselves seated on stone walls or eating fried clams by the harbor. It occurred to my mother that perhaps the photographs we took while away from the house might be shared with some other camera in some other place. She brought along a small dry-erase board from the kitchen to hold in front of ourselves whenever we took a picture, thus to furnish unknown (and perhaps nonexistent) others with dates, places, and names. In this way our family photographs took on the quality of messages in bottles — although we flung them into an abyss, a sea we never could see. But there were: me with fudgesicle and flip-flops, my father’s white t-shirt luminous, my mother’s jacket collar popped against the sea-summer chill, all of us floating to the surface on our estranged smiles.

Indoors each night we clicked away, amassing an inventory of enigmas. I still remember many of the photographs, though I no longer have them to hand: a sumptuous spiral staircase, its banisters of dark wood, its treads clad in rich red carpet; a hand-cranked ice cream maker streaming with meltwater; the artfully-framed boughs of an aged oak from which peered the eyes of what looked like a dog, but must have been some forest creature. Rarely did the photographs depict people; when they did, their faces were turned away or veiled. Unlike our own photographs, in which we grinned foolishly around our scrawled-upon sign. This discrepancy made me wonder whether we had guessed the camera’s workings correctly; but my parents never remarked upon it, and as with many other mysteries I kept my own counsel.

As these days and nights passed in the house by the sea, a change came over my parents. Each had latched onto an obsession: for my father, the camera’s mechanism became the object of all his intent. Numerous times he dismantled the machinery with great care, holding the tiny, flashing parts up to the lamplight and examining them minutely. I would find him rummaging in the closets, peering into the attic, splintering back loose floorboards as he hunted in vain for some explanatory circuitry embedded in the very timbers of the house. My mother, meanwhile, each night arranged and rearranged our growing deck of exotica, seeking patterns in the tumult of imagery. Some nights she attempted a geographical sorting, although the locations proved too uncertain to venture guesses upon. She placed them into two rows, one with people and one without; the animals she first counted with the people, then shook her head and slid them one by one to the unpopulated side. She smoked as she worked, wreathing her short hair, her spectacles, and her fruitless cartomancy in glamorous rings and clouds. She played any number of suits and tricks: wild and domestic animals, urban scenes and rural, indoors and out, marine and terrestrial; even the colors obsessed her. But as her ashtray filled, these shufflings disclosed no distinct meaning to her ever-reddening eyes.

At night, shouts and thumps from the upstairs bedroom continued unabated. I was not unaccustomed to such night sounds, and yet as the camera worked its way into our family life they took on a fresh vehemence. One night — the air heavy and still, the beam from a faraway lighthouse flickering as it searched the muslin curtains — I climbed the stairs and stood in their bedroom doorway. Shadows reared and loomed as my parents stalked and shouted and the ceiling fan spun on its stalk. “Can’t we put things back together?” my father pleaded. “We can put things back together.”

“You can take it apart and put it back together any which way,” mother replied. “You’re good at that, aren’t you? Always putting things together and taking them apart. But it doesn’t change anything. It’ll work the same no matter how you put it together. It’s the nature of it to do what it does to us.”

I thought they were talking about the camera. When they looked at me, I asked them what was wrong, whether it was the camera, what we could do to fix it. My mother came to me, sweaty and wet-cheeked; soap and ashes enfolded me as she took me in her arms, saying, “and here he is, our little picture. Only he’s no self-portrait, is he? He’s something else altogether. Where did he come from? Where did you come from, little picture?” She took me back to my bed and stayed with me, crooning that refrain — “where did you come from, little picture” — until I fell asleep.

When I awoke the next morning, she was gone — back to the city, my father said. We returned ourselves in a couple of days, me sitting in the front seat. He dropped me off at home and left to stay with friends in the next town over. When mother went away — some months later, after my father had returned home — she took with her the photographs we made at the house by the sea. I supposed that she was looking for the places we had glimpsed in them, hoping to stitch them together into some reality more brightly colored. It was a solace that she took both the images of ourselves and the mysteries together in one small box. But I never learned whether she found a sorting to make the photographs yield their story.

We went to the place the next July, daddy and I, but my father wanted nothing to do with the camera. He dismantled it one last time, put the pieces in the drawer, and never spoke of it again. We frittered away the month generously sailing the inlets and sounds, picking rocks and shells on the flats, fishing or watching the stars wheeling in the night. A few times my father would turn in early, and I would sneak into the parlor to examine the disassembled camera. In subsequent summers I tried the puzzle of the parts until I made the camera whole again. And then — for by then I was going alone to the house by the sea — I started taking pictures. Only my object had changed: now I was hoping for an image that might show mother to me. I consumed many packets of film, discovered many images of unknown people, places, and things. Finally, the manufacturer stopped making film stock for the camera and the flow of cryptic images ceased. Looking through pictures of unknown dogs and uneaten wedding cakes, perfectly-set tables and unkempt lawns, only one image provokes my curiosity. In it, a woman looks across a street as if making ready to cross, or maybe she’s waiting for someone. She wears a quilted jacket, its collar popped familiarly; her bob of black hair seems to bristle as she steps away. 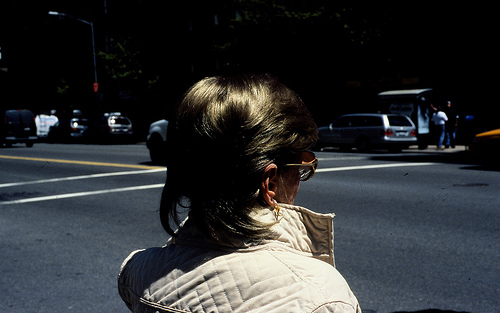 This is the second and concluding episode of “Camera Lucida”; read Part One here.