My middle-aged memories of the house by the sea, like the photographs my family took there, have a veiled provenance. Caught amidst swirling instances of indecision, they seem of a piece with the frothy state of betwixt-and-between that gave the place its grain: sharp grass and velvet mud, rush of water and crunch of shell, rough-planked interiors and placid exteriors. The image of the place is vivid to me now, but its meaning is hidden, flickering and uncertain, boxed up and piled in shadows.

My father’s great-grandfather had purchased the house by the sea around the turn of the last century, and it had been the scene of many family holidays down to my father’s childhood. In the decades preceding my birth, however, a series of disputes among brothers and brides had set the place off-limits for a generation. My father had spent summers there as a child, but through college and engineering school and the early years of his marriage only fleeting visits had been possible; by the time I was born, the place was shunned by all sides of the family. But then some uncle unknown to me had died; some sort of resolution had been offered or fallen into, and that winter my cousins and I had heard our parents judiciously scheduling various visits over the phone.

Our turn came in late July, bringing hope of a respite from struggles within our household and without. The fraternals and collaterals of my father’s side were not the only contested realm in our family; my parents, too, had skirmished often in the last few months, a running battle that seemed to wax and wane with every change in fortune. What could I do to change the tide? I was twelve years old, and both of them were perfect in every conceivable way. If my father could not keep his job, it must have been part of some tremendous design, the chief elements and ends of which lay outside my narrow borders. If my mother were drinking rather heavily — if the streaked and reeking pitcher she carried to breakfast and dinner always seemed too full, and to slop too often as she poured her glass — it must have been a necessary salve. And their faces grew fond whenever we talked about the house by the sea. Their memories of it were happy, their expectations of a salutary return too bright and hungry to brook any doubt.

We drove up mid-week, my mother preferring to miss a couple of days to avoid the weekend highway. I sat wedged sweatily between bocce and badminton sets, amidst suitcases, boxes of books, and pantry goods, while the road effected its slow reduction from multi-lane tollway to rolling blacktop to washed-out, sandy way snaking through scrub oak and huckleberries. The place itself sat on a low rise of windswept grass sheltered by broad sycamores, offering a stately contrast to the low, fey thatch of leather-leafed oaks. The tall pile of white clapboard and slate-gray porches looked slightly out of place, as if a suburban colonial had hitched up its skirts and tripped barefoot through the scrub to settle here before a swerve of sea.

And what a swerve it was — twelve feet beyond the back porch step, the windswept lawn gave way to a low, broken fieldstone wall at which the tidal current lapped. Beyond that landfall spread a sweep of water rippling its way amidst tussock-topped islands, a puzzle of beguiling insularities scattered a mile or more out to where the mud dropped away and the proper sea stood behind its shattering pale of surf. Close by the fieldstone break, a small sailboat lay hauled out on a hump of long grass, its sail and rigging furled and wound like some forgotten aegis. With the sun riding high amidst a tumult of clouds, the flats alive with a tapestry of wind-woven water to robe the granite beaches’ whitened bones, the picture thus presented was a fair and memorable one.

By the time the last box was deposited on the kitchen table and the car doors finally closed, however, this scene had rearranged itself entirely. The tide having run out, the seascape was now a ruin of runneled mud and shellheap. Here and there lay mirrored pools of water like lozenges. People ranged across the distances of the newborn strand; in a couple of place boats lay stranded on their gunwales. I stumbled out to the edge of the grass and uttered a cry of astonishment.

“The tides run here like no place else,” my mother called to me, settling into a chair on the porch with a heap of napkins for folding. “That’s the quality of this stretch of coast,” she continued, her bob of black hair bristling in the wind. “You come to visit one place, and turn around to find yourself in another.”

“You’ve been here before?” I asked.

“When daddy and I first met,” she replied, nodding. Referring to my father she used “daddy,” a habit of her own family away down South, which to me always sounded strange.

She exhaled a long time. “The picture it presents today,” she replied at last, “is utterly different.”

I wondered what she could mean, but she only told me to run along and see what I might find on the mud flats. So I ventured out, straying far out among pools and rippled sands, climbing onto islands parked on the flats like feral ships run aground. I thrilled to the quiet implacable quality of time on the flats — the water trickling in almost imperceptibly as the islands’ shadows stole across the sand — and especially the esoteric sense of being somewhere that wasn’t. An hour before, these trackless, well-packed rills and dunes had been seafloor; in the space of six hours, they would be hidden again by waters. It was as if two wholly different places existed in one frame, diurnally revealed as the moon swept round the earth. Only the occasional holler or crash of wood from the old house on the rise reminded me of enduring reality.

That evening my father and I sat in the yellow glow of lamps as the moist cool stole in at the windows. The house’s interior belied its stolid exterior — within, it looked like a circus tent woven together of unfinished planks. It had a roughhewn feel, but for the bookshelves lining nearly every wall with their ancient, salt-rimed sets of Harvard Classics and Blue-and-Gold Ticknor novels leaning softly into one another. My father sat with one of these books flopped fatiguedly open in his lap while I scooted about on my knees testing the drawers and cupboards. Off in the beadboard-lined kitchen, my mother was washing the dishes with infinite care, setting down plate after glass in a soft, moist, syncopated rhythm.

“You’re unlikely to find anything of interest in the cupboards,” my father intoned. “It’s not as if we’re the first to visit this place in any long while. Uncle Neal and his kids were here for the last three weeks, and my cousins have been coming for years unabated. Those ruffians have likely ransacked the place for trinkets by now.”

He wasn’t quite right. I had managed to find a few prizes: a greasy bottle of tanning lotion, a frosty pill of beach glass, a tiny troll doll that looked as if had been chewed upon. I was about to give up when I found — not in a drawer, but in a kind of hinged magazine rack nestled behind the lampstand — a camera. And a marvelous camera at that: a black, steel-lipped scallop-shell of leather, which popped open to reveal a lens retracted into a kind of bed of bellows, set in a face of polished chrome beneath a plate of lensed plastic.

“Let’s see,” said my father, taking the camera in his large red hands and pudging up his face as he turned it over. He explained that it was an old Land camera, an old style of Polaroid, which took pictures on instant film that developed, with the application of a chemical squeegee inserted into a pocket in the camera’s shell, in about a minute’s time.

“It says it’s got film in it,” he said, pointing at a tiny fogged window with the number “7” framed within. I asked if I could take a picture with it, to see if it worked. “Well I don’t see why not,” he replied, dropping his book and grinning wanly as I aimed the camera at him. I pressed the cool back to my face — there was a smell of rust and old leather that seemed to carry me to faraway places — my finger fumbled for the shutter button, and the whole machine shuddered a moment before a plane of photo paper came flicking out like a tongue, emitting a clean, alkaline smell that blended pleasingly with the former mustiness.

“Now take it out,” he said, nodding at the dangling photo. I did, and he showed me how to withdraw the squeegee from its little scabbard to drag a foul blue gel across the photo’s milky emulsion. “Set it here,” he said, indicating the broken-edged marble table top next to his armchair. I laid it down gently, as if it were made of glass, and we both leaned over it as the image resolved by uncanny, slow degrees.

And after a breathless moment, there it was: a photographic image. But not of my father, not of the armchair, not of any scene offered in the house by the sea. Instead we saw a sunlit pagoda at the end of a red-railed bridge nestled amidst blossom-heavy boughs.

We stared at the photograph a moment, and then our eyes met. I asked my father if the picture could have been taken by someone else and jammed in the mechanism until we released it. “It doesn’t work that way,” he replied, shaking his head uncertainly and reaching for the camera. He handled it a moment like a broken thing, turning it over soft-handedly as if it were an injured bird. Then quickly he aimed the lens at me — I smiled reflexively — and pressed the shutter button. The mechanism wheezed; a new photograph protruded, its imagery still veiled. Treated and set upon the table, its streaked surface slowly dried and brightened to reveal a woman standing between railroad tracks in shorts and fluffy bedroom slippers, her face turned from view.

His face screwed up in fretful curiosity, my father got up and strode about the room, taking three pictures in rapid fire. He aimed at the ceiling, the floor, and the door to the kitchen; a disappointed-looking pier, a collapsed hot-air balloon, and a white Labrador retriever with its leash in its mouth, resolved in turn before our eyes.

My mother stole in behind us as we looked at the images on the chipped marble. “Where’d you find those?” She asked.

My father stood upright, aimed the camera, and snapped, my mother presenting an instant rictus of flashbulb smile. He yanked the photo from the camera, squeegeed it, and handed it over. Her smile dissolved as she watch the image appear. She showed it to us: newly-pollarded trees marching along a road; tall, leafless elms on a smudged horizon. 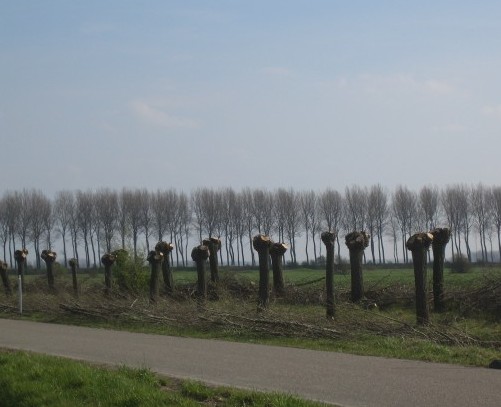 This is part one of a two-part tale; the conclusion will appear on Wednesday.

Matthew Battles has written about language, history, and the natural world for many publications. When he makes poems, he puts them here. A fellow at Harvard's Berkman Center for Internet and Society, he's also the author of Library, An Unquiet History.