James Bridle, a fascinating London-based publishing maker/impresario, has produced a twelve-volume edition of every edit made to the Wikipedia entry on “The Iraq War” from December 2004 to November 2009. 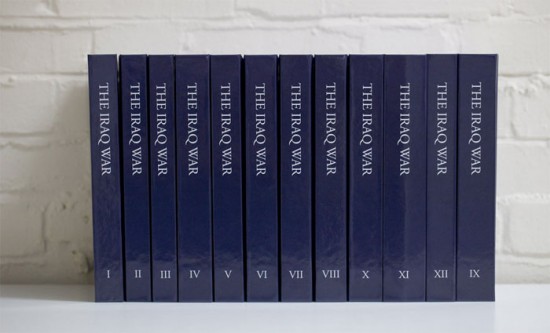 Twelve thousand edits were made during the period; in Bridle’s edition, they make up seven thousand pages of text. (It might be fun to do an OED-esque compact edition, in two volumes, packaged with a magnifying lens.) 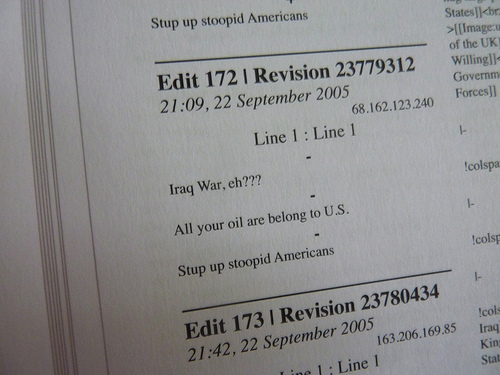 In his post about the project Bridle discusses the atemporality of networked culture. In a time of what William Gibson has called “our communal prosthetic memory,” time is flattened; facts and figures from the past aren’t buried by the succession of presents, but are ominavailable. Or so it seems — for of course time does fly, also; the past accumulates; the angel of history watches as past and future collide in the endlessly-destructive standing wave of the present.

The atemporality of networked culture breaks the iron grip of narrative, offering a new and useful perspective on the past. But with this atemporality regnant, it becomes far too easy to forget that this present is just one possible world, and never necessarily the best; that the future, like the past, is a tissue of unintended consequences. And so the form of the physical book offers a uniquely useful instantiation of time’s arrowlike side. As Bridle points out, the twelve volumes of The Iraq War are no history — no settled account of the events of the first decade of the twenty-first century — but a historiography: a record of presumptive accounts. Printed out and bound, a frozen Wikipedia edit stream embodies one example of the mediated, constructed, shreds-and-patches constitution of consciousness. As Bridle’s project shows, it’s a function of the physical book we’ll always find useful.

Photos are from Bridle’s flickr set for the project.