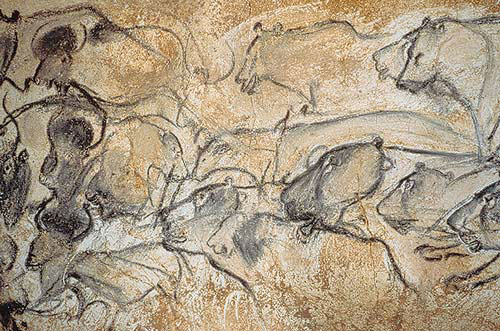 Having bested grizzly bears, Antarctica, opera, and Klaus Kinski, Werner Herzog is ready to tackle —Plato. With his flamboyant existentialism, our greatest living Master of Extreme Philosophy will take on cave animals and their wranglers, in front of the cameras, and without a net.

Plato’s Allegory of the Cave has challenged philosophers for over two millennia. It addresses a little problem we have with reality, to wit: reality. The basic idea is that we’re all trapped in a cave, looking at shadows on a wall, and cannot (or at least, not without significant aid from philosopher-kings) get outside and see real things in the sun. The “cave” is our mind and its perceptions. How do we know anything is real, and not a (pick one) dream, hallucination, illusion, allusion, Reality TV, “been Photoshopped,” etc.? How do we know that you and I both mean the same thing when we call something real? Wait — how do I know you are here at all? And if I am here — but where is here? And what am I?

If you are inclined to puzzle over conundrums of this sort, you will be happy to know that we have made minimal progress towards a solution in the past 2000-some-odd years. Not that there haven’t been attempts! Reality has had its champions — as shadows have had theirs. There was a significant development in the 18th century, when Bishop Berkeley claimed that it was all in his head, and Samuel Johnson attempted a refutation by significantly kicking a rock. Those of you who remember the 1980s, or have read about them online, may recall the sally of the simulacrum in the culture wars. Essentially, the shadow side says, we’re in the cave, and we like it here.

Never one to take a metaphor metaphorically, Herzog has talked his way into a few hours in Chauvet Cave, home to some of the most astonishing cave drawings yet discovered. Unlike our overengineered yet wholly inadequate proto-holodecks, real cave walls have, as he describes, “bulges and concavities,” so that the animals drawn over them seem very unlike perfect Platonic forms. Their analogue anomalies instead edge towards lifelike, especially (The Master’s eyes light up) once they’re set on fire! Not the drawings. But fires and torches were lit in the caves, and in the flicker the lines would shift and jump, art-directed by cave-Camerons for an early 3D effect.

The images themselves are incredibly delicate. As you know if you’ve Googled them from time to time, hoping for an “in,” tourists aren’t allowed into the painted caverns because breathing wreaks havoc. So sadly Herzog will not be allowed to set them on fire. But we will see them jump; Herzog refuses to document a thing as falsely inert, divorced from its lived experience. In a move entirely consistent with his lifelong immersion into the subjectivity of the objective gaze, he’ll be filming them in 3D.

The living simulacra of our past are similarly mirrored in our future. But perhaps you despair of the future? The future was what we believed in the past, as Matthew Battles has argued in his eloquent HiLobrow essay on Apollo: we would escape our planet and explore space, gazing at nebulae, mining asteroid belts, perhaps engaging with alien life forms; filling up the “I” with the universe. But all we managed to do was tag the moon and then retreat, not so much in disgrace as in bafflement. What were we to do there? The indifferent rock refused to rise to the resonance of narrative. The night was cold; the sun, elemental. We came back home and shrugged, embarrassed, when its monthly sliver ascended the sky. 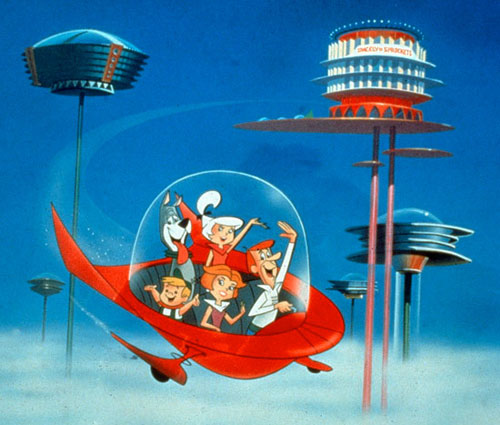 So thank Hollywood for the Enterprise! Captain Kirk, in tight ochre two-ply, has been preceding us into the far reaches of space, boldly going where no broadcast has gone before. As real as the airwaves can make him, our Captain has been zooming towards far, frozen galaxies since 1966 when he was first launched, along with all the gang of course: Spock, McCoy, Uhura, and their space-appropriate simulated thereminic theme song (previously profiled on HiLobrow). TV and radio waves easily escape the earth’s atmosphere and keep on going. So Star Trek, in a maneuver mediated by a very poetic justice, is our real scouting party; at least as far as the aliens are concerned. And us. 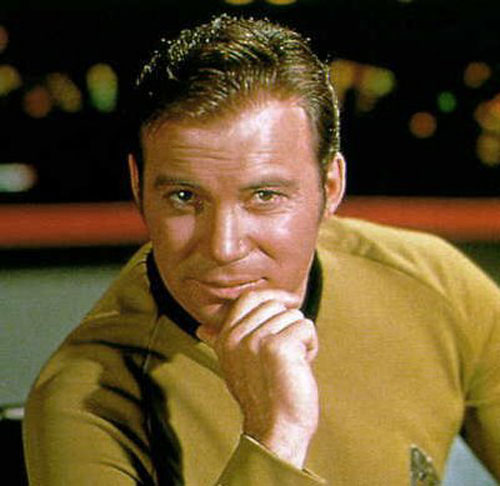 Of course it’s not the only signal we’ve sent. Carl Sagan’s 1985 novel Contact (and the 1997 film) made much of Hitler’s presence at the 1936 Berlin Olympic Games, caught and beamed back to us in a reciprocal volley of (mis)understanding. This is terrible news, yet possible. Is Hitler to be earth’s emissary due to unfortunate technical circumstance?

But signals are not so easy to catch. The aliens cannot pin them on velvet for leisurely examination. The signals will be faint, and intent on further travels. Rather, the aliens might employ shadowy mesh nets of antennae, scraping the waves as they brush past their planet, perhaps even using a special stylus with which to play them: steampunked Space Victrolas on the far edge of time.

I like to imagine that it is not our bellowing that will capture their antennae’d attention, but our laughter. All our sitcoms are out there too. A shower of laugh tracks descend from space — the aliens might wonder, is it static? Is it language? Is it — contagious? In my shadow-play they are laughing too, suddenly, as if in response to a wave of mild euphoria. Go ahead, make my day. And perhaps we have. Whether or not we spelunk the wormholes, or overcome our ennui and sail past the moon; if laughter is our legacy, then we have, truly, escaped.

And if, like me, you can’t wait for The Master’s cave drawings, and feel a strong urge to fly over there and wedge yourself into the production somehow, I recommend this hypnotic online immersion into Lascaux, Chauvet’s companion painted cavern.