The aura of ambiguity beckons in refusal; you can sense but not quite see. Something is out there. 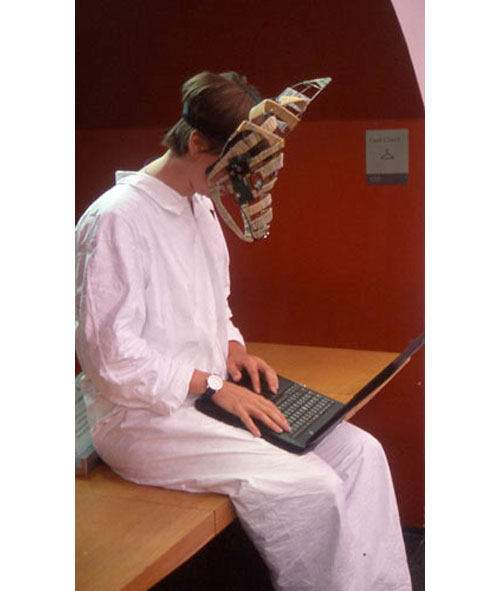 Every work of art is an attempt to bring something into clearer focus; perhaps even, to invoke. Every attempt fails. And so, we continue. And we realize, in the continuation, that had we succeeded, we would have only outlined a single orange, or its memory; there is so much more about oranges, and how terrible orange is, to reveal. 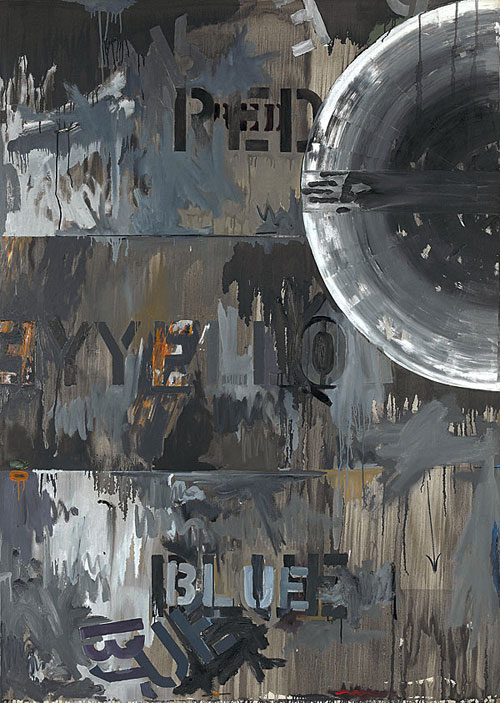 Of course there are masterpieces. So much so that we forget, for awhile, the attempt. And it is good to forget; forgetting is the handmaiden of attention. But the brilliance of the result can obscure its real object. To see its outlines we need to look not at the finished piece, but at the process.

Ted Hughes, profiled previously on HiLobrow, knows the territory. In his essay, Sylvia Plath: The Evolution of “Sheep in Fog,” he tracks both result and attempt. The hunt is fraught – something is trying to emerge. Not what she intends to write – anOther. It breaks through the surface viscosity of the text, only to sink back again. She lets it up and forces it down over and over, struggling with danger and seduction, knowledge and forgetting. However, the battle causes a quite different poem to emerge – not the first one, and not the emergent one, but a different, better one than the one she originally intended. Meanwhile, the real one watches, and waits, and bides its time. 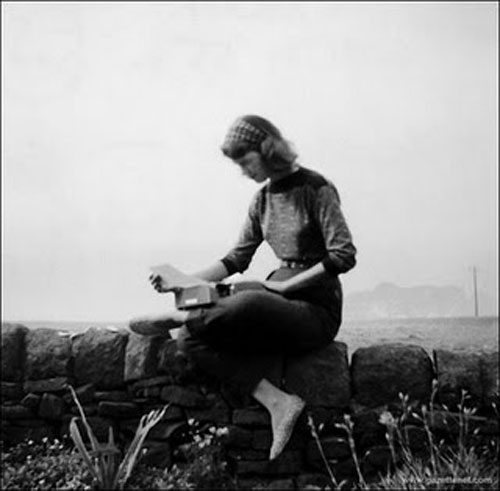 “Everything in her life and marriage had been with her in that chariot – and the rust now corrodes it all. Again it drags her towards something she cannot manage, and again she separates herself forcibly from it, returning to her baby-faced sheep, which are now:

saner, they are blessed.

“And ‘Like saints, they inhabit an absence’. We now see why these sheep were important enough to give the poem its title. At this point they represent her desperate effort to bring the poem to a close in a positive, sacred, talismanic image that can float on the darkening current of the poem and protect her from it.

“Meanwhile, of course, we have glimpsed another kind of poem altogether … a massive complex of images, of the kind that rises into the ‘total statements’ of epic and drama – the mythic poem of the chariot, the full subjective drama of her fate, that was pushed under, and sank away, and never did get written. Although, in a sense, the effort of this fifth poem to come into existence determined every word of the poem we have, and provided the final three lines by metamorphosing the myth of Phaeton into that of Icarus, it remains unknown. Just as those last three lines, and the final complete perfect form, of ‘Sheep in Fog’ would have remained unknown if she had died two weeks earlier.

“All this, which that final copy conceals, is revealed only because the full sequence of drafts was saved.” 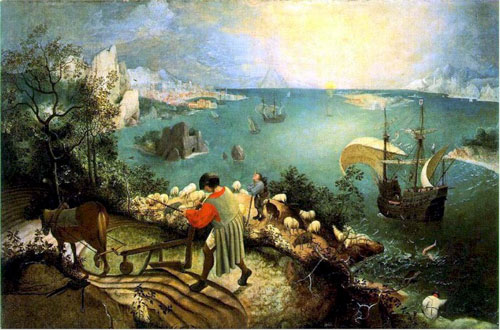 [Landscape with the Fall of Icarus, Pieter Bruegel, 1558]

Plath didn’t have time. She was too close to the content of myth, it pulled her under and she drowned. But Hughes did – have time that is. He could not surface it himself, but he could bear witness, and show us how a brilliant Agincourt was yet a single struggle in an unending contest. But for his trouble, Hughes was also caught. He did not drown, but he was never allowed to desert his post – one small wet hand wrapped always around his ankle, a close, insistent reminder. 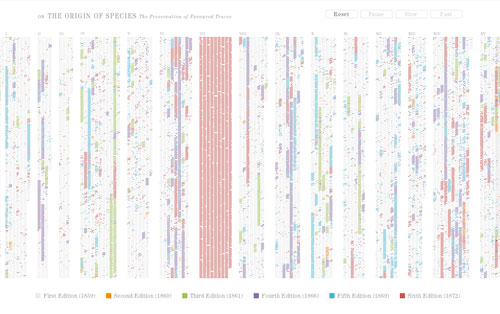 The process is the same for all seekers. On library ad infinitum, Matthew Battles drew my attention to The Preservation of Favoured Traces, an applet in which Ben Fry tracks emergence in Charles Darwin’s Origin of Species. We can watch the evolution of the theory in time-lapsed color-coding, as Darwin refined and chiseled and augmented and reworked his way through successive editions. One gets the sense that at no one point was the book actually finished, except by fiat with Darwin’s death. The One Brilliant Idea does not spring fully armored from Zeus’ head. Instead it is cobbled together from disparate pieces that require endless tweaking as a hedge against incipient entropy. 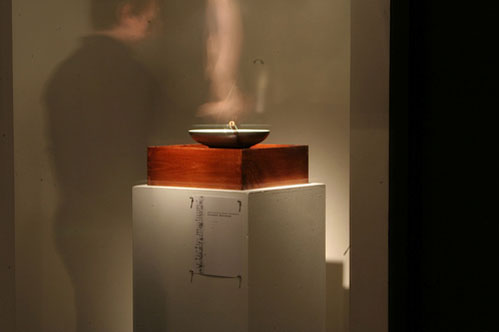 What is the call to art, to knowledge? We do not know what it is, but we know when we hear it. New media artist Andrew Sempere works with the call. In Bowl of Oceans: Meditations on Burst Philosophy, a simple bowl of water sits on a pedestal, with a ladle. Viewers are invited to please touch the art. Yet as the water is stirred, the sound of the ocean, at first contained within the bowl like a shell, grows louder and more tempestuous. The undertow waits for those who would control the tides. 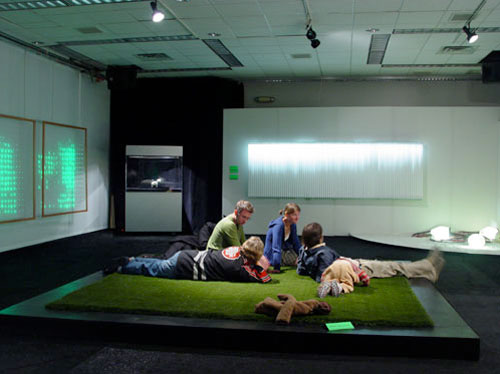 In Sod Off! the voice takes on a different character – visitors are invited to occupy the astroturf as a temporary autonomous park in the gallery space. Yet as they linger, the grass growls, increasing in volume to vibrate in anguish. 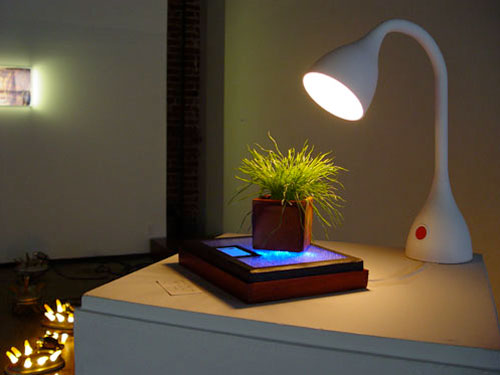 And yet, we are also part of the natural world; not every contest codes conflict. How about a florapet? When the (real) (wheat) grass in GrassHappy is touched, the circuit is completed and its base glows green in an echo of chlorophyllic euphoria.

We see shrugs, echoes, peripheral pressures and gaps. Perhaps we cannot know it. But once we have glimpsed we are compelled to imagine; we are drawn to the dark lake again and again, seeking the singular shift in perspective when it will surface in front of the lens and finally be seized.