In December 1984 a small but memorable press conference was held in an English pub. It had just been announced that Ted Hughes was to be the new Poet Laureate, and a media reception had been arranged in Hughes’ local hostelry.

What a figure he cut, the honored poet! Sage, tangle-browed, regarding the TV cameras with a sort of cultivated primitivist gloom. (Would they steal his soul? His views on “the imprisonment of the lens” were well known.) Overlit and discomfited, trapped in a chair, he seemed to be guarding his mood against the heightened vacancy of the moment. Questions popped around him. In his new capacity as the queen’s official poet (one journalist wanted to know), was he up to the production of occasional verse?

The idea was almost comic. Hughes was, notoriously, the poet of overkill, of skulls and jaguars and slaughtered bulls. Now, he was suddenly placed in direct succession to the melodious Tennyson and, further back, the exquisite Dryden. Could we expect to see from him a “Charge Of The Light Brigade” or an “Annus Mirabilis”? Low-voiced, Hughes replied that he would produce “as the muse dictates.”

There was a glint of wryness in the remark, but for Hughes it was also the gravest of puns, a flash from his poetic core. Yes, he had a muse, and yes, she was a dictator. She spoke the words, and she made the rules. She was the Goddess, Nature, Imagination, Being, source of life and Queen of the Earth, and the penalty for disobeying her was always, in one form or another, death.

“Stare at the monster…” began Hughes’ 1957 poem “Famous Poet,” a nightmare of literary obsolescence whose protagonist becomes a “stegosaurus,” sealed beneath the “gigantic horn and plate” of his achievement and repute. And now, five years after his death, fossilhood beckons for Hughes himself with the publication of his Collected Poems (Farrar, Straus and Giroux) — thirteen hundred pages thick, heavy as dinosaur bones. Collected Poems arrives in the same season as the biopic Sylvia, starring the rugged Daniel Craig as Hughes and Gwyneth Paltrow as Sylvia Plath, and Diana Middlebrook’s Her Husband (Viking), an excavation of Ted and Sylvia’s doomed marriage and poetic partnership. 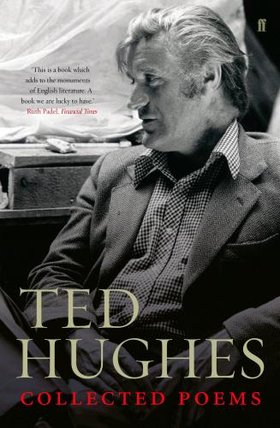 Can Hughes the poet escape these encrustations? The answer is yes. A glance at the Collected Poems brings it all back. To read Ted Hughes as a young person was pure heavy metal. The humped strength of his lines, the brain-jamming immediacy of his images, the darkness of his concerns: there was nothing else like it. “The apes yawn and adore their fleas in the sun./The parrots shriek as if they were on fire…” (“Jaguar”). For all its novelty, it felt like something old, something recognized.

Its intensity was literally childlike — steady-gazing and unsentimental, with touches of grave comedy, of playground solemnity: “A flustery hen-bird with her knickers torn/Tries to escape through the rhubarb” (“Sparrow”). Children were among his most loyal readers, drawn to his poems as to some fierce and unequivocal spectacle, and Hughes returned the compliment with magical books of children’s stories and poems.

Education was of concern to him: he saw the culture at large as one deadening act of miseducation, and wrote of “the pressure of preconception” that “descends, like a space helmet, to cover the entire head and face.” The way out was to concentrate, to clear your head and look. He wrote a guide for children called Poetry In The Making: “You keep your eyes, your ears, your nose, your taste, your touch, your whole being on the thing you are turning into words.” This was the poetic action, the moment of capture rehearsed and repeated a thousand times in his poetry: the thrush’s “bounce and stab” at the worm-rich ground.

He was at war with conventional ways of seeing, with the entire baggage and build-up of civilization that blocked the eye and thwarted the nerve — that denied the Goddess-world “its one true health: acceptance into life.” He was not alone in this, of course: good poets are always trying to cut through the crap, and Hughes’s arsenal of Tarots and spells and Ouija boards and energy-channelers was, at the time, a very fashionable way of engaging with the so-called cosmic forces. But Hughes was no faddist. He didn’t dabble: he probed and plumbed and fathomed the worlds of lore and magic until his writing, on just about any subject, took on an almost eerie submarine authority.

Besides, for him and Plath such pursuits were eminently practical — tools of the trade, ways past the blockading cerebrum and into poetry. “The small piloting consciousness of the bright-eyed objective intelligence [has] steered its body and soul into a hell…. We are disconnected,” he wrote in 1976. The deposition and attempted murder of the Goddess by the lesser gods of Science and Rationalism became his grand theme, sounded throughout his work, enforcing unity. Certainly he was obsessed, but his obsessions did not whirl him before them. In fact, they shed a singular light.

His readings of English history are the readings of an empath or a medicine man: he dealt in the nation’s health. The catastrophe of the Great War, from which his father came back as one of 17 survivors from an entire regiment that went against the guns at Gallipoli, was a psychic fact to him. He wrote of “the shock of machine guns, armies of millions, and the plunge into the new dimension where suddenly and for the first time Adam’s descendants found themselves meaningless.”

He was a Shakespearian par excellence. To the playwright’s Complete Works Hughes applied the same huge power of retention that could capture the mood of a landscape in a line or two of poetry; able to hold the entire thing in his head at one time, he watched, as if at his leisure, the play of forces between its elements. From this process emerged, in 1992, his enormous, almost insanely ambitious critical work, Shakespeare and the Goddess of Complete Being, which signed up the Bard as — predictably enough — chief shaman and prophetic arbitrator in the battle between the Goddess and the Goddess-destroying God.

Hughes envisioned Elizabethan England as a “police state” in which the old Catholicism was suppressed, and the new Puritanism held off, with torture and repression. “The passion and paranoia of internationalized civil war,” he wrote, “were pushed down into the private theater, the fiery crucible, behind every English citizen’s navel.” And it was Shakespeare, with his hauntings of regicide and twisted mother-love, who got to the bowels of it, dramatizing the ongoing conflict, unable to resist its images, condemned by his dreamer-like genius to explore its consequences. 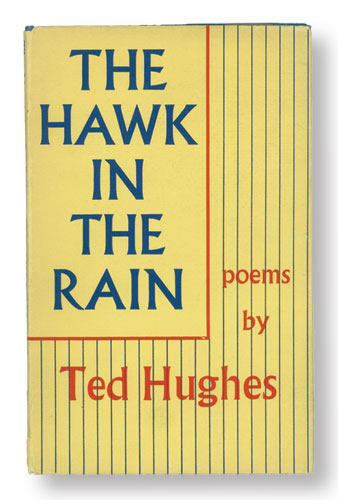 So the laureateship, for this peculiarly deep and dark version of an Englishman, was an interesting proposition. Offered first to the diffident spectre Philip Larkin (who refused it), it passed to Hughes, who accepted the post with sacerdotal gravity. To serve a mortal queen, his country’s queen, in the role of bard — how could he say no? Her views might be insignificant, her executive powers negligible, her hats the ridicule of society, but to Elizabeth II he would dedicate at least a portion of his gift.

The goddess-muse, luckily, went along with it. Hughes’ first poem as laureate was a smash hit — the magnificent “Rain Charm for the Duchy,” in which he credited the birth of Prince Harry (now a stoatish teenager) with ending a months-long drought. Other occasions followed, and were duly risen to. In the wake of Princess Diana’s death, when the streets of central London were a pageant of swaying, milling, near-medieval mass hysteria, carpeted with flowers and dreamily supervised by wonderstruck policemen, Hughes wrote the commemorative “6 September 1997”: “Holy Tragedy and Loss/Make the many One./Mankind is a crowned, Holy/Mother and her Son.” His point was clear: Di-mania was nothing new, not some freak of media-driven magnification, but rather something ancient, a spasm or blowback from England’s buried Catholic memory. Di-mania was Mother-worship, Mariolatry, one of the aspects worn by the Goddess as she passes through history.

The Collected Poems give us a chance to observe Hughes’s career in its full arc, from the prizewinning showing-off of his first volume, The Hawk In The Rain, through the cabalistic doldrums of Cave Birds and “Prometheus On His Crag,” to the laureate poems and the wonderful rediscovered energy of his translations from Ovid. Hughes was never in any doubt that the great poet was a shaman, a healer of the spiritual hurts of his tribe. Shakespeare was one, as were Yeats and Eliot. Did he himself qualify, in his own words, “for the magic drum”? His words never attempted the vatic height of the Four Quartets or of “Sailing to Byzantium” — they are too switched-on, too low to the ground, for that.

Bounce and stab, bounce and stab — this is Hughes’ simplicity. But beneath it lies his profundity: the buzzing, buried continuum of magical awareness to which he gained (earned) access, the immensity of his erudition, his bone-deep availability to insight. This is greatness. The weight of his Collected Poems sends them straight to the bottom of that quiet, hair-raising pond in “Pike,” whose dark water is “as deep as England.”

Originally published by The Boston Globe’s Ideas section on Dec. 21, 2003. From 2003-08, our friend and colleague James Parker, currently a contributing editor at The Atlantic, was a culture critic for the Boston Globe’s Ideas section and for Boston’s alt-weekly, The Phoenix. HiLobrow.com has curated a collection of Parker’s writings from this period. This installment is the eighth in a series of ten.