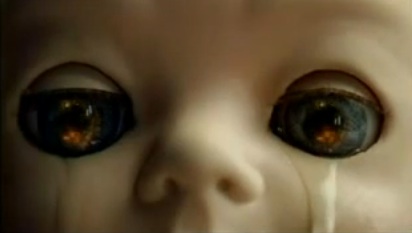 HORROR IS CRUCIAL to human experience. Like sex, innocence, and despair, the fear of death is a wellspring of all kinds of creative activity; with the help of its zombified double, the uncanny, it unsettles and realigns our art. While not proscribing it as in the case of pornography, middlebrow’s response to horror is disparagement.

Or… something else. Co-optation, perhaps, or domestication. As the following advertisements show, horror may be defanged in service of consumer desire, calories, or the public good.

Gamers like to think of themselves as subversive, and also infernal; there’s the whiff of occult magic and defiance about the console gamer’s world. But only a whiff! The gamer is a sorceror’s apprentice in stocking feet — an enfant terrible, but still an infant. Sony’s now-vintage advertisement for the PS/3 plays with this uncanny minor magic:

Like forbidden fruit in the old tales, candy has gained a subversive savor in this health-conscious age. Bingeing on Skittles confers upon the sugar-addicted some of the fairy tale’s pixillated power:

A drive in the country can offer bucolic sensations; it can also deal out death with reckless speed. Where the peasants of Languedoc met Death’s arrival by crossing themselves, secular travelers in the French countryside today may practice a similar gesture to greater effect:

Boston Phoenix writer Sharon Steel last year bestowed the name “Quatsch” on the kind of uncanny cuteness embraced by the mainstream in the likes of LOLcats, Hello Kitty, and the fey pose adopted by McSweeney’s and Believer, flagships of Dave Eggers’ literary armada. In explaining her coinage she quoted HILOBROW’s own Joshua Glenn identifying that strain of “quirk (that) has been defanged and embraced by the mainstream.” There’s an unsettlingly analogous move underway in these advertisements: the Reaper carries not a scythe but a feather duster, and he can be bought off with the swipe of a credit card.