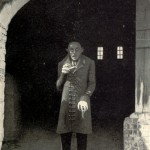 National Geographic News reports that the skull of a plague victim unearthed near Venice exhibits an unmistakable hallmark of treatment for vampirism. The woman’s mouth was forced open by a brick — a measure that prevented her from spreading the plague by chewing her burial shrouds, the alleged modus operandi of pestilential vampires. The unfortunate woman’s remains shed light on the terror of the plague in medieval Venice; more interestingly, they testify to a fear of the undead that is ubiquitous and normative in human history.

So when New Yorker critic Joan Acocella writes that vampires “are merely symbols of the real-life sociopolitical horrors facing the late Victorians,” we get miffed. Middlebrow criticism like this has it exactly backwards.

Middlebrow critics suck the blood of the work of art, draining its life-force, leaving it dessicated and dead; the hilobrow critic celebrates the work and the risk ventured in its making.

The sociopolitical horrors that surround us, after all, access ancient stirrings. In the late nineteenth century, someone of Bram Stoker’s cohort might have gotten exercised over Eastern European emigrants and emancipated women; today, we fret over rapacious hedge-fund managers, Rush Limbaugh, and ghost neighborhoods of foreclosed and abandoned homes. But these things aren’t “symbolized”; they are the symbols. And works of art are the ritual practices designed to connect them — and us — to the wells of the unconscious. When we say that hilobrow reenchants the meme, this is what we mean.