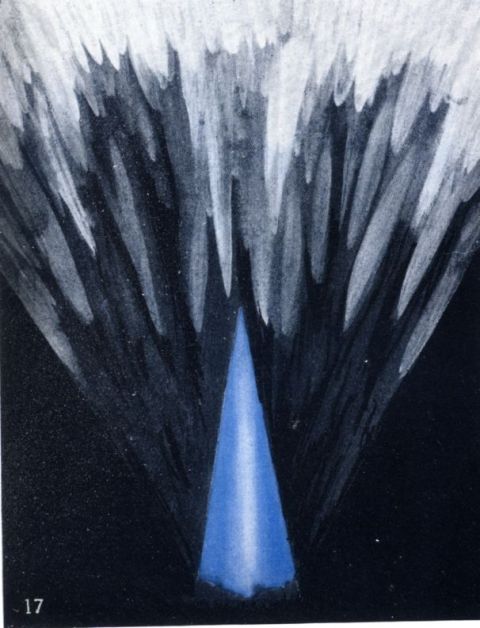 In Fig. 17 we see the result of his thought — the response of the LOGOS to the appeal made to Him, the truth which underlies the highest and best part of the persistent belief in an answer to prayer. It needs a few words of explanation. On every plane of His solar system our Logos pours forth His light, His power, His life, and naturally it is on the higher planes that this outpouring of divine strength can be given most fully. The descent from each plane to that next below it means an almost paralysing limitation—a limitation entirely incomprehensible except to those who have experienced the higher possibilities of human consciousness. Thus the divine life flows forth with incomparably greater fulness on the mental plane than on the astral; and yet even its glory at the mental level is ineffably transcended by that of the buddhic plane. Normally each of these mighty waves of influence spreads about its appropriate plane — horizontally, as it were — but it does not pass into the obscuration of a plane lower than that for which it was originally intended.

Yet there are conditions under which the grace and strength peculiar to a higher plane may in a measure be brought down to a lower one, and may spread abroad there with wonderful effect. This seems to be possible only when a special channel is for the moment opened; and that work must be done from below and by the effort of man. It has before been explained that whenever a man’s thought or feeling is selfish, the energy which it produces moves in a close curve, and thus inevitably returns and expends itself upon its own level; but when the thought or feeling is absolutely unselfish, its energy rushes forth in an open curve, and thus does not return in the ordinary sense, but pierces through into the plane above, because only in that higher condition, with its additional dimension, can it find room for its expansion. But in thus breaking through, such a thought or feeling holds open a door (to speak symbolically) of dimension equivalent to its own diameter, and thus furnishes the requisite channel through which the divine force appropriate to the higher plane can pour itself into the lower with marvellous results, not only for the thinker but for others. An attempt is made in Fig. 17 to symbolise this, and to indicate the great truth that an infinite flood of the higher type of force is always ready and waiting to pour through when the channel is offered, just as the water in a cistern may be said to be waiting to pour through the first pipe that may be opened.

The result of the descent of divine life is a very great strengthening and uplifting of the maker of the channel, and the spreading all about him of a most powerful and beneficent influence. This effect has often been called an answer to prayer, and has been attributed by the ignorant to what they call a “special interposition of Providence,” instead of to the unerring action of the great and immutable divine law.