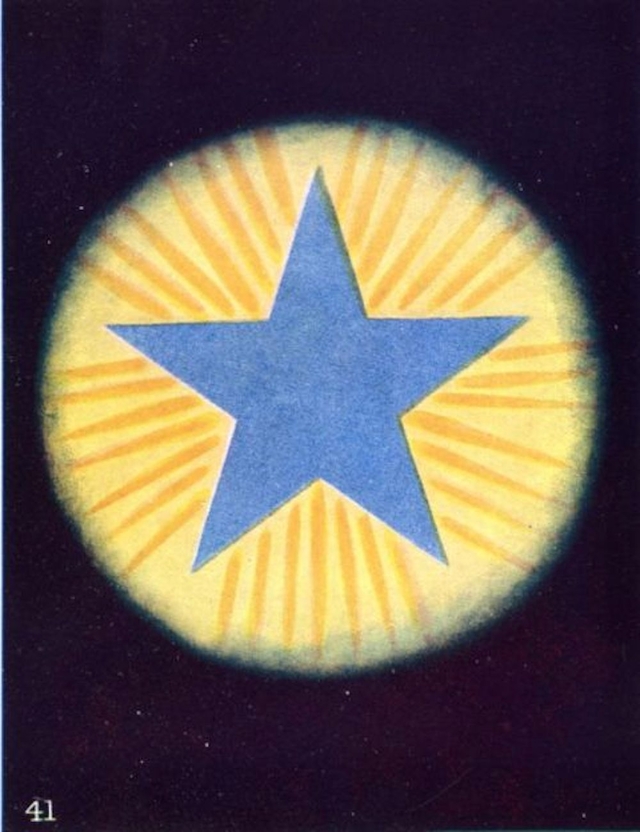 “The Logos as Manifested in Man”

We are now coming to a series of thoughts which are among the very highest the human mind can form, when in meditation upon the divine source of its being. When the man in reverent contemplation tries to raise his thought towards the Logos of our solar system, he naturally makes no attempt to image to himself that august Being; nor does he think of Him as in any way possessing such form as we can comprehend. Nevertheless such thoughts build forms for themselves in the matter of the mental plane; and it will be of interest for us to examine those forms. In our illustration in Fig. 41 we have a thought of the LOGOS as manifested in man, with the devotional aspiration that He may thus be manifested through the thinker. It is this devotional feeling which gives the pale blue tinge to the five-pointed star, and its shape is significant, since it has been employed for many ages as a symbol of God manifest in man. The thinker may perhaps have been a Freemason, and his knowledge of the symbolism employed by that body may have had its share in the shaping of the star. It will be seen that the star is surrounded by bright yellow rays shining out amidst a cloud of glory, which denotes not only the reverential understanding of the surpassing glory of the Deity, but also a distinct intellectual effort in addition to the outpouring of devotion.