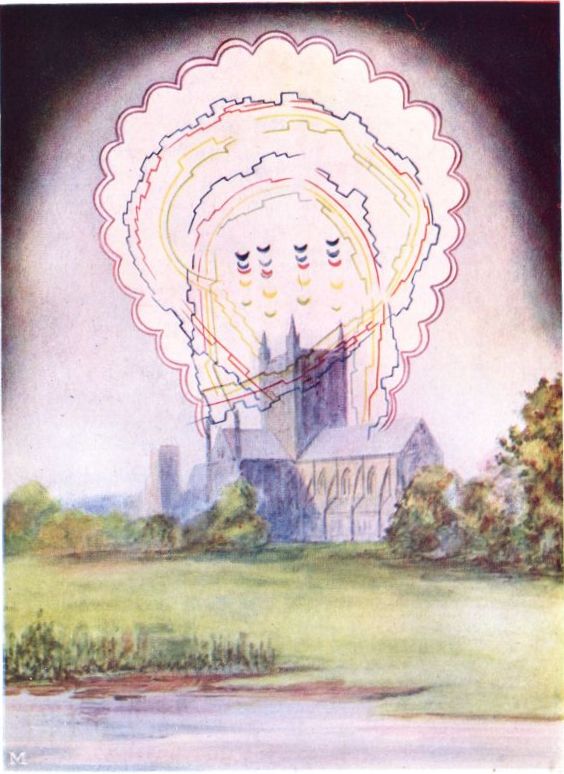 The first of such forms, a comparatively small and simple one, is drawn for us in Plate M. It will be seen that we have here a shape roughly representing that of a balloon, having a scalloped outline consisting of a double violet line. Within that there is an arrangement of variously-coloured lines moving almost parallel with this outline; and then another somewhat similar arrangement which seems to cross and interpenetrate the first. Both of these sets of lines evidently start from the organ within the church, and consequently pass upward through its roof in their course, physical matter being clearly no obstacle to their formation. In the hollow centre of the form float a number of small crescents arranged apparently in four vertical lines.

Let us endeavour now to give some clue to the meaning of all this, which may well seem so bewildering to the novice, and to explain in some measure how it comes into existence. It must be recollected that this is a melody of simple character played once through, and that consequently we can analyse the form in a way that would be quite impossible with a larger and more complicated specimen. Yet even in this case we cannot give all the details, as will presently be seen. Disregarding for the moment the scalloped border, we have next within it an arrangement of four lines of different colours running in the same direction, the outermost being blue and the others crimson, yellow, and green respectively. These lines are exceedingly irregular and crooked; in fact, they each consist of a number of short lines at various levels joined together perpendicularly. It seems that each of these short lines represents a note of music, and that the irregularity of their arrangement indicates the succession of these notes; so that each of these crooked lines signifies the movement of one of the parts of the melody, the four moving approximately together denoting the treble, alto, tenor and bass respectively, though they do not necessarily appear in that order in this astral form. Here it is necessary to interpolate a still further explanation. Even with a melody so comparatively simple as this there are tints and shades far too finely modulated to be reproduced on any scale at all within our reach; therefore it must be said that each of the short lines expressing a note has a colour of its own, so that although as a whole that outer line gives an impression of blueness, and the one next within it of carmine, each yet varies in every inch of its length; so that what is shown is not a correct reproduction of every tint, but only the general impression.

The two sets of four lines which seem to cross one another are caused by two sections of the melody; the scalloped edging surrounding the whole is the result of various flourishes and arpeggios, and the floating crescents in the centre represent isolated or staccato chords. Naturally the arpeggios are not wholly violet, for each loop has a different hue, but on the whole they approach more nearly to that colour than to any other. The height of this form above the tower of the church is probably a little over a hundred feet; but since it also extends downwards through the roof of the church its total perpendicular diameter may well be about a hundred and fifty feet. It is produced by one of Mendelssohn’s “Lieder ohne Wörte,” and is characteristic of the delicate filigree-work which so often appears as the result of his compositions.

The whole form is seen projected against a coruscating background of many colours, which is in reality a cloud surrounding it upon every side, caused by the vibrations which are pouring out from it in all directions.