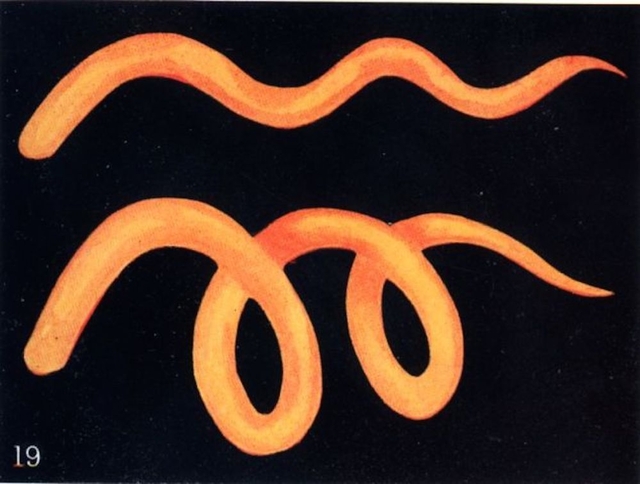 “The Intention to Know”

Fig. 19 is of interest as showing us something of the growth of a thought-form. The earlier stage, which is indicated by the upper form, is not uncommon, and indicates the determination to solve some problem—the intention to know and to understand. Sometimes a theosophical lecturer sees many of these yellow serpentine forms projecting towards him from his audience, and welcomes them as a token that his hearers are following his arguments intelligently, and have an earnest desire to understand and to know more. A form of this kind frequently accompanies a question, and if, as is sometimes unfortunately the case, the question is put less with the genuine desire for knowledge than for the purpose of exhibiting the acumen of the questioner, the form is strongly tinged with the deep orange that indicates conceit. It was at a theosophical meeting that this special shape was encountered, and it accompanied a question which showed considerable thought and penetration. The answer at first given was not thoroughly satisfactory to the inquirer, who seems to have received the impression that his problem was being evaded by the lecturer. His resolution to obtain a full and thorough answer to his inquiry became more determined than ever, and his thought-form deepened in colour and changed into the second of the two shapes, resembling a cork-screw even more closely than before. Forms similar to these are constantly created by ordinary idle and frivolous curiosity, but as there is no intellect involved in that case the colour is no longer yellow, but usually closely resembles that of decaying meat, somewhat like that shown in Fig. 29 as expressing a drunken man’s craving for alcohol.