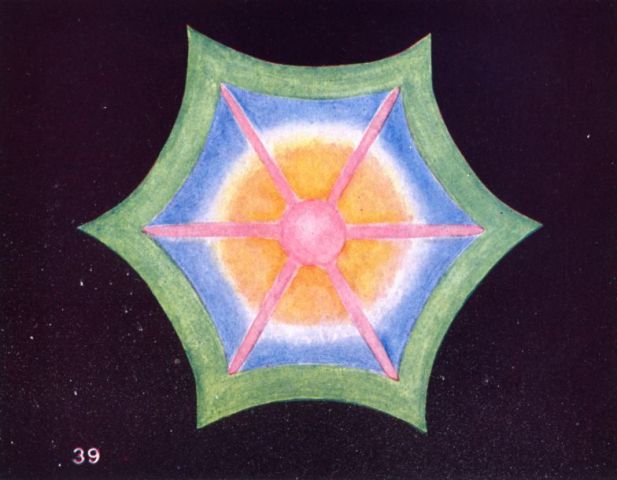 “In the Six Directions”

The form represented in Fig. 39 is the result of another endeavour to extend love and sympathy in all directions—an effort almost precisely similar to that which gave birth to Fig. 37, though the effect seems so different. The reasons for this variety and for the curious shape taken in this case constitute a very interesting illustration of the way in which thought-forms grow. It will be seen that in this instance the thinker displays considerable devotional feeling, and has also made an intellectual effort to grasp the conditions necessary for the realisation of his wishes, and the blue and yellow colours remain as evidence of this. Originally this thought-form was circular, and the dominant idea evidently was that the green of sympathy should be upon the outside, facing in all directions, as it were, and that love should lie at the centre and heart of the thought and direct its outgoing energies. But the maker of this thought-form had been reading Hindu books, and his modes of thought had been greatly influenced by them. Students of Oriental literature will be aware that the Hindu speaks, not of four directions (north, east, south, and west), as we do, but always of six, since he very sensibly includes the zenith and the nadir. Our friend was imbued from his reading with the idea that he should pour forth his love and sympathy “in the six directions”; but since he did not accurately understand what the six directions are, he directed his stream of affection towards six equidistant points in his circle. The outrushing streams altered the shape of the outlying lines which he had already built up, and so instead of having a circle as a section of his thought-form, we have this curious hexagon with its inward-curving sides. We see thus how faithfully every thought-form records the exact process of its upbuilding, registering ineffaceably even the errors of its construction.