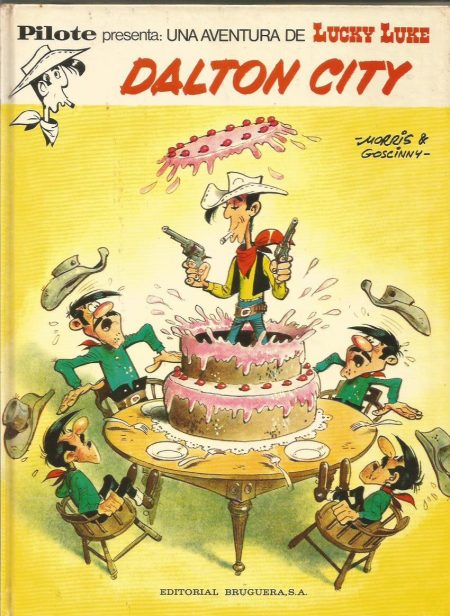 In their eighth appearance in the series, the Daltons — outlaw brothers Joe, William, Jack, and Averell — escape from prison. Their plan is to restore Fenton Town, a hotbed of depravity which Lucky Luke had previously shut down, to its former glory. Thanks to the hapless hound Rin Tin Can (Morris and Goscinny’s homage to Rin Tin Tin, canine star of a couple dozen 1920s movies), the Daltons capture Luke — and force him to play the role of a prospective guest in Dalton Town, prior to its grand re-opening. Once the Daltons hire singer Lulu Breechloader and her troupe of dancing girls, Luke persuades Joe Dalton that she intends to marry him. Thrilled, Joe plans a wedding and invites every desperado in the territory to attend. (The various outlaws dressed in their wedding finery were endlessly amusing to me, as a child.) Once Joe discovers that Lulu is already married, Luke must fight for his life.

Fun facts: Serialized in Pilote magazine, this is the 34th Lucky Luke story. Morris and Goscinny were doing some of their best work around this time; I’m particularly fond of The Stagecoach (1968), The Tenderfoot (1968), Jesse James (1969), and Apache Canyon (1971).