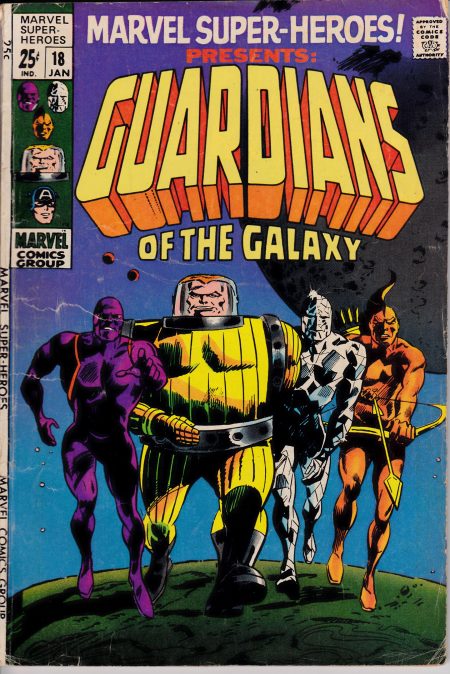 Conceived of by Arnold Drake, who’d previously created the Doom Patrol for DC, and Stan Lee, the Guardians of the Galaxy are an all-for-one, one-for-all squad — originally composed of a Jovian super-soldier (Charlie-27), a crystalline Pluvian (Martinex), a primitive Centaurian (Yondu), and a psychokinetic mutant (Vance Astro, later known as Major Victory) — who’ve united against the threat, to their fellow humanoids on a far-future Earth, of the reptilian Brotherhood of Badoon. The Dirty Dozen-like team would appear and disappear from Marvel’s pages, in following years, landing their own series briefly in 1976, then making time-traveling cameo appearances in Thor, The Avengers, Defenders, and other titles through 1980 — written by Steve Gerber and drawn by Don Heck and Sal Buscema. Starhawk, who joins the team (in more ways than one), is an amazing character, too. Despite how grim and gritty Marvel became in the ’90s, the Guardians have remained a light-hearted, action-packed franchise.