Sometimes he lives with Grandma, Grandpa, and Heathcliff — and sometimes he’s in jail. Which is weird, for several reasons:

But the weirdest thing, obviously, is that Heathcliff’s dad wears prison clothes. Somewhere near Westfinster, there is an adorable cat prison that dresses cats up in clothes. Westfinster might be in Japan. And this cat prison might be a private prison run by the lady who runs Cat Prin: tailor of a cat.

You can tell Heathcliff’s dad is trying to be a good dad because he’s trying to spend time with his son. Then again, he’s not really trying that hard to be a good influence because, well, HE WEARS PRISON CLOTHES ON THE OUTSIDE. Also, they plot crimes together. 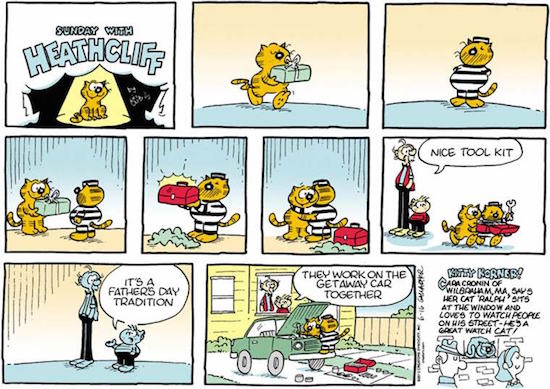 What are they getting away from? Also: Heathcliff has, like, 20 modes of transport already. Where did this rundown car come from? And why don’t their owners seem concerned. About the owners…

Why don’t Grandma and Grandpa take some responsibility for their cat? My cat used to be an outdoor cat until he got arrested for breaking into my neighbor’s house and, after retrieving him from the Humane Society, he became an indoor cat (because he had gotten sick). This is a true story. Also, my cat was allowed to wear his normal cat clothes consisting of nothing. How much money do these people spend on bailing Pop out of cat prison? And how doesn’t Heathcliff just use his insider connections to prevent his dad from getting arrested? Westfinster is perhaps the most confusingly corrupt town in the Western cartoon world.

On the Heathcliff cartoon show (the second one; yes, there were two), Pop doesn’t wear prison clothes. He just has heavier stripes. I guess because he was born a criminal. Or he got cat tattoos in prison. I hope it’s the latter because I don’t want to believe that some cats are innate criminals.

Here’s the YouTube summary for the episode “Pop on Parole“:

Heathcliff’s father has been paroled from prison for good behavior. But he needs to visit his parole officer before 5pm. Pops decides to drop in on his son, and Heathcliff immediately thinks he broke outta the joint! He tries to hide him, but he runs away, eventually due to Heathcliff’s harassment (and the fact that he’s a habitual criminal), he robs a bank and is hauled off to jail again.

There’s a cat parole office in Westfinster? Who runs that? Again, no one gives a damn what Heathcliff does. Also, this entire episode is crazy. Heathcliff drove his dad into going back to prison. Is there a cat therapist in Westfinster? There needs to be. Whew boy. Anyway, you can watch this episode if you want.

Here’s a summary from a YouTube account where you can buy an episode of the show (including another episode about hockey):

Heathcliff’s thrilled to learn his mom is coming to visit, but terrified she’ll discover he’s been fibbing about living with a wealthy family. Enlisting Sonja’s aid, Heathcliff pretends to live in her mansion. Between dodging Marcy and Iggy in the neighborhood and the maid and butler inside the mansion, Heathcliff has his hands full keeping up a fat-cat front. Finally, Heathcliff confesses to Mom. After meeting the Nutmegs she wonders why Heathcliff bothered fibbing when he lives with such a wonderful family. Giving Mom a goodbye kiss, Heathcliff suggests that maybe he lives with a good family because he came from a good family.

Wait, how did she find Heathcliff in the first place? I have so many questions but this blog isn’t about the television shows, it’s about the comic strip.

You can watch the segment here:

In conclusion, someone should write a dissertation on Heathcliff’s family.