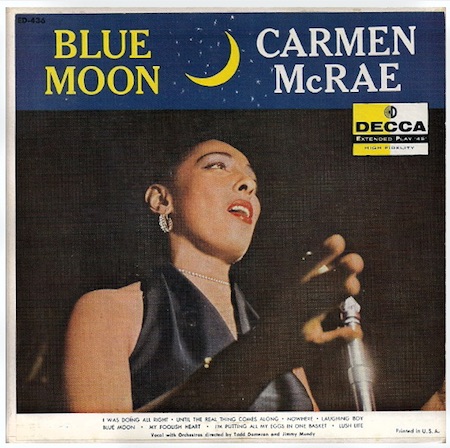 Though she’d be counted among the most revered, fiercely incisive, and — on her truculent days — feared of jazz singers, the star of CARMEN McRAE (1920–94) was remarkably slow in rising. Her father was Costa Rican, her mother Jamaican, and the rich cultural foment of Harlem as important an education as piano lessons and all-girls Julia Richman High School. Through Irene Kitchings, wife of jazz pianist/bandleader Teddy Wilson, McCrae befriended her idol Billie Holiday, who recorded the unknown McRae’s song “Dream of Life” on January 20, 1939. This was an achievement but not yet a career so McCrae — typist by day, jazzbo by night — stayed on the scene, enthralled with the new music, bebop, and even married bop drummer Kenny Clarke; thus “Carmen Clarke” makes her debut recording in May 1946 with the Mercer Ellington Orchestra. While a July 1948 live performance with Charlie Parker proved McRae’s modernist mettle, she soon followed comedian George Kirby to his hometown Chicago, where — though their romance faltered — she developed a successful act as pianist/singer. In 1952, McRae moved to Brooklyn, where her parents had bought a Dean Street brownstone, and it was at Flatbush and Avenue U, singing with accordionist Mat Matthews’ combo, that record producer Chuck Darwin entered the club and left enthralled. Singles for Darwin’s tiny Stardust label followed, then an LP for Bethlehem, then, starting in 1955, the brilliant series of albums for Decca, starting with Torchy, which confirmed McRae’s stature. George Daniel of the Chicago Defender’s explained her appeal: “Miss McRae is an electrifying singer, endowed with a voice that can bellow a tune with brash huskiness and then simmer down to a soft velvet-like whisper that’s capable of sending shivers down your spine.”

On his or her birthday, HiLobrow irregularly pays tribute to one of our high-, low-, no-, or hilobrow heroes. Also born this date: Edmund Husserl, Yip Harburg, Vivienne Westwood, Santiago Jiminez Jr., Biz Markie.