The Odd Couple, like its warring-roommate characters, was a franchise that landed on the popular consciousness’ doorstep in the middle of the American Century and never left, recurring as a mythic meme of mismatched personalities and perspectives. As it resurfaces as a new CBS sitcom, Adam McGovern looks at a less-remembered level on which the show’s defining 1970s iteration struck a chord with the way the modern mind works.

ALL INSTALLMENTS
Famous for being Felix 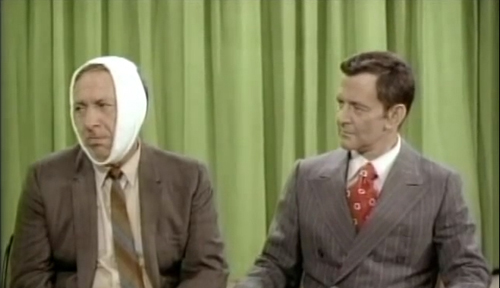 In a defining episode, Oscar is assigned to fill in for an absent indie-theatre critic at his newspaper and dupes Felix into ghost-writing the column for him, handing off his free tickets and then submitting whatever Felix tells him about the shows. At first appalled by the deception when he discovers it, Felix soon becomes intoxicated by his power of life and death over struggling productions, and when Oscar is then invited on a highbrow TV discussion show, Felix does all the talking, posing as “Mr. Madison’s dentist” and yanking Oscar’s head toward his to deliver opinions he says Oscar is mumbling in his ear after major dental surgery that day. Felix bullies the other (real-life, major) theater critics with his authoritarian opinions, telling the one female panelist that she only thought Brando was significant in Streetcar Named Desire because “you probably went ape over his body,” while Oscar takes all the blame. In Felix’s masquerade and rants we see an economical premonition of identity theft, tyrannical consumer reviews and misogynist internet trolling.

On said internet no one knows you’re a dog, and apparently on TV no one even noticed that neither Oscar nor Felix was a theater critic; both the broadcast and the transmitted self allow for a multitude of personae, and Felix extended this into physical life. His wardrobe of avatars included the clichéd continental casino-master he turns into when he runs a “Monte Carlo night” to raise funds for his amateur opera club, and the calypso singer he thinks he is on a Caribbean vacation. As if in a dream, he gets to stand in for ballet star Edward Villella, who has been held up on the way to performing in a dance recital for kids taking classes from Villella at the same nightschool Felix is.

Another dream come true for Felix is the kind of worst-nightmare many have since come to perceive in the takeover of entertainment franchises (Marvel Comics, Star Trek) by their own former fans — though in this case, Felix isn’t even invading his own territory. Briefly put in charge of his brother Floyd’s Topps-like bubblegum and trading-card company, Felix seizes the means of expression to start a series of “cards for kids who don’t like sports.” (“Great Moments in Opera Number 16,” Oscar reads aloud, “Mimi gets tuberculosis.”)

Those cards don’t work out, but time and again Felix’s enthusiasms draw his opera-singing and ballet-dancing idols into his life as if through some wifi-borne law of attraction. Ironically, while never achieving his delusions of taking a place beside them in his world, he ends up exposing the mass-audience of our own to more PBS-style culture than any other sitcom ever has.

We can hope that the media construct “Felix” at some point gained some self-awareness of this, and the accomplishment gave him some peace. In one episode, when the Couple’s friend Murray is home watching them together with Felix’s now-estranged partner Dawson on a variety show that, yet again, Oscar has been hired to host and Felix has had to barge onto (long story), the camera pulls in on Felix and he commands straight into it, “Murray! Use your coaster!!” For a second, the slovenly Murray moves his beer-can onto one, then moves it back onto the unprotected coffee-table, saying with a laugh, “He can’t really see me.” Now more than ever, I’m not so sure.