Human history is full of monsters who became saviors (slave-owning founders of American democracy, autocratic rulers who shift from theocratic to civil society, et al.). The Honeycomb Trilogy is about saviors who become monsters. 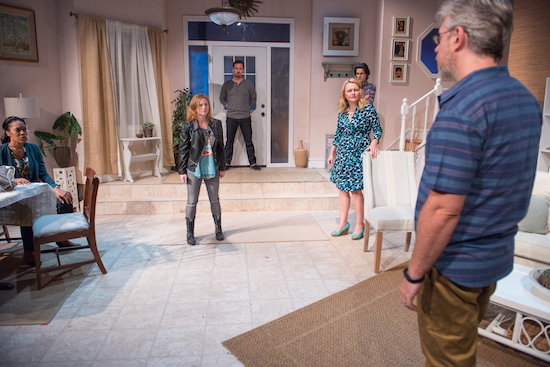 In Part 1, Advance Man, charismatic and insidiously smooth former Mars astronaut Bill Cooke is overseeing an ostensibly green project to feed the world that’s actually a cover for a more risky and sinister transformation of the Earth. Played by Sean Williams in a masterwork of emotional modulation, he can shift from ingratiating bro to steely tyrant with unnerving ease; given the wipe-out-the-world-to-save-it plot, he is an epic portrait of the terror of undeterrable good intentions.

And also of paternal manipulation; playwright Mac Rogers is a poet of domestic treachery, and this world-ending drama’s first chapter takes place entirely in Bill’s suburban domain. His wife Amelia (a tour de force of bleeding dignity by Kristen Vaughan) knows not to ask what he’s up to; their sensitive son Abbie (a wounded, guarded David Rosenblatt) will do anything to preventively please him; and their kickass daughter Ronnie (a contained, raging, righteous and unfettered Becky Byers, her best dramatic work yet) has an uneasy admiration and rivalry with him. 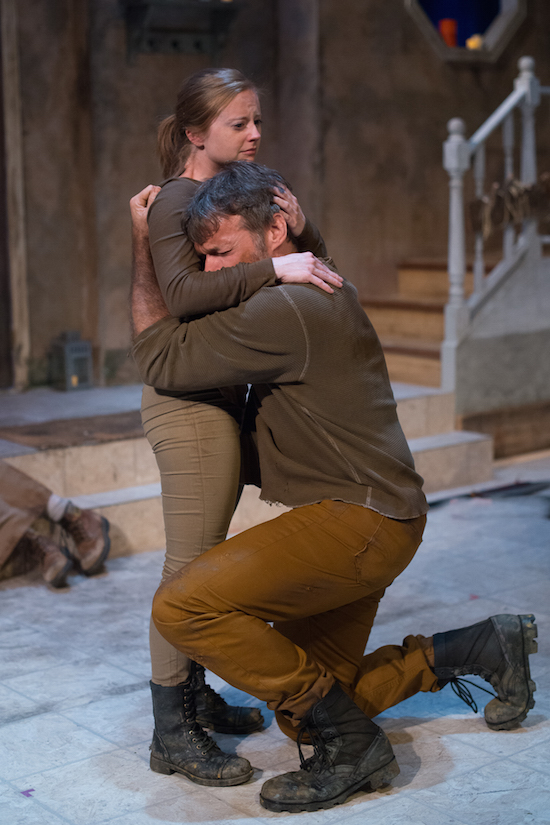 The first play takes us to the brink of the apocalypse that Bill and his co-conspirators think of as a utopia. The second, Blast Radius, takes us more than a decade ahead, to a time when Ronnie and Abbie are living out the sins of the father.

This is a revival of the acclaimed trilogy, so it’s not giving too much away to mention that the Earth has been overrun by a sentient insect race after the astronauts made the planet more hospitable for them (a pact sealed after an encounter on Mars that went counter to a different sinister agenda that the U.S. government intended). Abbie, always the outsider, welcomes the hive-mind he thinks can bring harmony to dissembling, destructive humanity; Ronnie has become a resistance leader.

America has always struggled with the contradiction of its sanctified individuality and the social contest that this tends to give rise to; Blast Radius tries to resolve it in the character of a hybrid insect/human, Conor (a remarkable portrayal of quiet loftiness and fledgling empathy from Jason Howard, which anticipated, and supersedes, Avengers 2’s Vision character by several years). His emergence from the hive-mind illustrates how individuality, not collectivity, fosters true communal responsibility, for the uniqueness of your personality and feelings creates alliance with the masses you realize are made up of distinct lives too. In a connected community, individuals can sacrifice for the society, but not be sacrificed to the society.

Abbie doesn’t see it that way, scarily shifting with apparent ease from persecuted outsider to patriarchal decider. Ronnie is turning into a warrior too, but in a breeding farm for the overlords, she’s the legitimate insurgent. We’re in the purgatorial phase of social change, in which one of the women tells her escapist boyfriend/chosen mate about his drug of choice, “Don’t smoke the choopie. Take the pain instead. Walk right into it, keep walking, walk right out of it. There’s no choopie like how that feels.” — but then, women are the ones who really know how much it hurts to create a needed new life.

A kind of mass suicide-bomb attack on the “bugs” may or may not change the course of the future, as we see Ronnie waver on the edge between being the sage leader who asks for, and the power-hoarding ruler who asks from. Conor, whose consciousness left his carapaced frame for human form, comes to prefer “these weak, exposed bodies that can feel everything,” but Ronnie is putting on armor that may never come off. 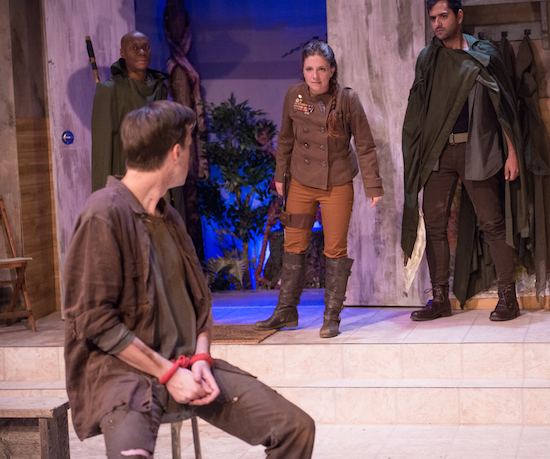 By the time of the third play, Sovereign, she has solidified into a kind of stone monument to the survival she championed, as humans get the upper hand and she wields it heavily. (Byers reprises the role in Blast Radius and Hanna Cheek assumes it for this play, her performance a supernova of conflicted pain.) Ronnie’s pariah brother (now grown up and played with towering conviction and queasy dissociation by Stephen Heskett) has been captured and is facing extra-judicial trial in her headquarters (their bombed-out former home), while her “Bug Hunter” troops come in and out, rounding up other hybrids and keeping a threatening peace. (Daryl Lathon especially is a portrait of stolid duty and bitter relish straight from the most tragic Grecian bloodbath.)

The confrontations and fault-lines are a perceptive vision of shaky civilizations, from the rough-draft beginnings of America to the contortions of post- and re-totalitarian Egypt. The existential phobias of cultural and generational overturn in a time of fundamental change are played out on the apocalyptic scale those who fear evolution tend to imagine.

In the end, nature may be the only course to take, even if that nature isn’t human (or what we have narrowly included in the term). Ronnie reminisces about her lost moments with the love of her life, long gone (a gruff, heartbreaking performance by Adam Swiderski in Blast Radius) — how these were “the only times I didn’t have to be who I am.” The Honeycomb Trilogy ends up being about the selves and soul-kin we could meet if we reconsidered who we think we have to be.