Alive as You and Me 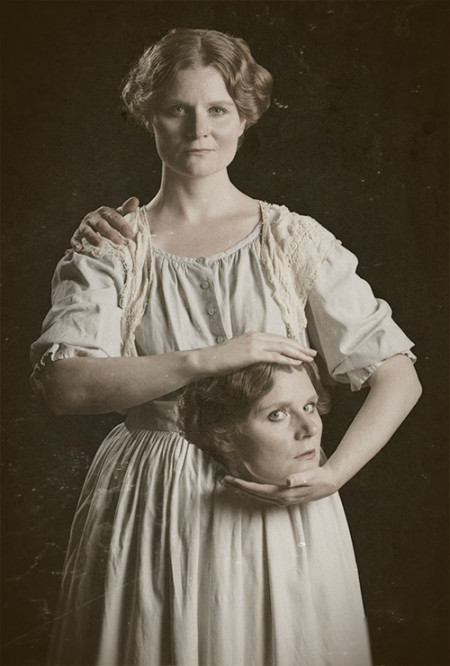 The Operating Theater Company presents travelling context-shows that immerse viewers in simulated historical experiences that convert them to participants. HiLobrow regular Adam McGovern considers the referents and implications of the Company’s work-in-progress, The Oracle.

Immortality is none of your business. History’s icons exist in the stories others tell, and we bring them back to the extent they serve our purpose.

Iris Atalanta Lee (a fiction herself, but one we need) broke definition and paid for it; a skilled weaver turned Luddite leader who was beheaded at age 17 for attacks on automated industry in early-1800s England. Her head, stolen mysteriously, was said to travel the world, speaking prophecies when put on display.

From antiquity to the silicon age we’ve always been far away from some arcadia we imagine we lost or were banished from, and Lee’s prophecies place a restored primeval in the future (which, with the advent of technological progress, long ago replaced heaven in our system of belief).

The Luddites went underground in secret societies, we’re told, and these lend themselves to wildly conjectural history. One draft comes in the exhibition/meta-biography The Oracle, from which the above “facts” are drawn. We see human tableaux, faked film, projected futures and implants to the past.

In the first living diorama, a self-revering Byron frets that his defense of Lee in the House of Lords was insufficient to sway the hearts of his colleagues; his idolization of her is an elevation that’s also a condescension, as his wife the Baroness Wentworth dreams of automation that could relieve her household drudgery (not, Lords forbid, a re-engineering of sexist society), and Byron heedlessly seeks the verse that will extol Lee further and set at least his conscience free.

Their daughter Ada becomes a direct ancestor of modern computing, which would replace our…heads in ways that automated labor was feared to replace our bodies. A later era would worry about the god in the machine (all the mid-20th-century books, movies and pop-songs about dictatorial sentient computers), but we see a mysticism run amongst all the Lee-era acolytes — Byron appeals to nameless spirits for poetic inspiration; a carnival huckster invokes higher powers in exhibiting Lee’s skull and getting it to “talk.”

Visitors are asked to record a part of Lee’s, or their own, incendiary speech on candles placed in an Edison wax-cylinder recorder, an element of associative genius: Lee was accused of inciting a factory arson, and her words, and other political expression, will burn down, if not out.

Some of the artifacts shown have involuntary, unknowing players — a vintage radio has been converted to an ant farm, their tunnels crossing behind its visor like the wayward, multiple minute-hands of some parallel-history projector; the ants’ class system is built-in, a collective clockwork of destiny that Lee escapes by not surviving.

The history keeps going without her or even us, as the exhibition continues into the 2040s, with not a return to sylvan idylls but the cybernetic Singularity being the sought-for solution to human toil and inequality. Again, a surrogate paradise; a rapid mass communion and systemization of spirit.

In one of many seepages of sly satire into the environment’s narrative, wall-text speaks of human consciousness’ compatibility with or disruption by worldwide electromagnetic fields, a “planetary pacemaker” that human atmospheric technology might throw off (thus causing imbalances ranging from reduced immune-strength to mental illness and addiction; a convenient upgrade from the assumed demon-possession of yore).

This text appears in a consciousness-transfer lab set-dressed like a cold, Atwoodian dys-arcadia; the technology eventually enables a full simulation of Iris Atalanta Lee, body cloned and mind retrieved from the electromagnetic ether, addressing “museum-goers” in the eerie rustic future of a re-created sitting room from the Earth she would recognize.

With otherworldly calm Iris reveals that time is an unbroken line that we can see to and from both directions in (“The future’s happened already, do you remember it?”); and that she is an idea that exists along the whole line (and in a lineage of “makers” stretching from her hand-created textiles to the coalescing of a self-aware mechanical world).

She sees herself as part of an infinitely wider fabric. Confiding this to visitors, as they leave she reverts to puppet-like teen-girl mode for the curators who are more concerned with her as a symbol transcending the contradictions of their programmed society. It’s a circle back to the conventional, contentedly servile role her fiery soul once went undercover in.

Byron, taking her story for himself, starts us off speaking of “the web that we weave” as the human life-force; he’s fixed in one strong, vivid strand of it, but Iris, far less known and technically nonexistent, opens us up to interpretation — put to death for killing unliving things, she is not about the downfall of progress but the thread that ventures outward, anchored by what binds us and guided by the human hand.