The Odd Couple, like its warring-roommate characters, was a franchise that landed on the popular consciousness’ doorstep in the middle of the American Century and never left, recurring as a mythic meme of mismatched personalities and perspectives. As it readies to resurface as a new CBS sitcom today, Adam McGovern looks at a less-remembered level on which the show’s defining 1970s iteration struck a chord with the way the modern mind works.

ALL INSTALLMENTS
Likes and Hates 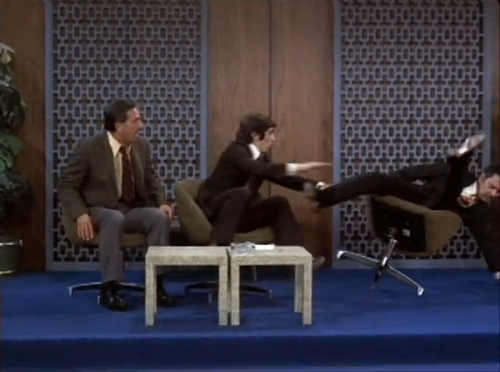 Twice, Felix hacks and irreparably crashes opportunities Oscar has to advance himself in the media sphere. When Oscar gets a shot at a TV sports talkshow, Felix, acting as impresario and transferring his own desperation for attention, breaks in with a staging of a tapdancing-majorette routine re-created by Oscar’s secretary Myrna from her own long-ago college halftime triumph, embarrassing Oscar out of a job; when Oscar is given his own radio show, Felix takes over with a scripted drama about Babe Ruth conceived as a return of golden-age radio but groaning with cliché; the network keeps the format and gets rid of both Felix and Oscar.

Not that Felix needed a stage for his spectacles. He was given to frequent, Broadway-revue-like outbursts of song just around the Couple’s apartment, hardest to unsee in the episode where Oscar happens to save his life and Felix proceeds to make Oscar wish he himself had died in the resultant fawning, which includes a showstopping rewrite and performance by Felix of the music-hall standard “M-O-T-H-E-R” as “M-A-D-I-S-O-N,” which ruins the flash-mob and lip-dub phenomena for everyone three decades before they even get to start.

Sometimes the field of battle is someone else’s turf; Oscar goes on the chat show of seminal ’70s smartass David Steinberg and does an episode’s worth of material about his neurotic roommate; vowing vengeance, Felix is granted rebuttal time (an actual legal obligation of broadcasters in that decade), but, once on the show, starts flubbing his lines and is embarrassed into a near-catatonic state until Steinberg helps draw him out with some of the 1940s commercial jingles he’s shown an affinity for off-camera, which Felix then leaps up and leads the house band in a medley of. Media is his source of strength and sustenance, and though it tends to be decades out of date, Felix’s fixation with it foretells the 800-cable-channel era’s oceanic archive of both enduring and obscure entertainment, and the internet era’s elevation of the obsessively encyclopedic fan.