ALL INSTALLMENTS
The following 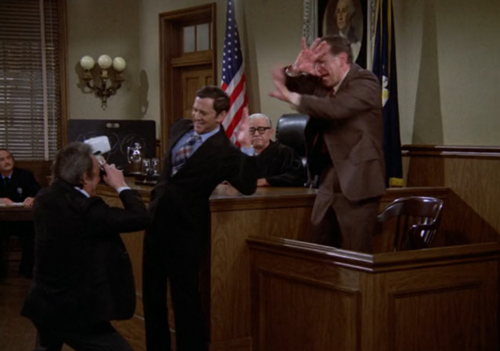 The Odd Couple saw ahead into the many ways that technology could extend our subconscious pathology into the external world. The escalation of real-life court cases telecast as a kind of civic pornography, which crescendoed in the 1990s (O.J., Menendez Brothers, etc.) was enacted in a number of episodes in which Felix represents himself in petty legal disputes, seizing the courtroom as a kind of community theater in all the worst senses of that term. Losing one case, he murmurs, “Now I know how Dreyfus felt”; and when he’s not comparing himself to the most tragically aggrieved of historical figures, he’s quoting Shakespeare and other classic poets, as if the resolution knob on some old, cosmic TV is wavering so that he phases half-in and half-out of literary legend.

No camera or microphone in the 1970s could resist the self-made-caricature Howard Cosell, a sportscaster who approached mass jock entertainment with an Ivy League demeanor and assessed it like some amateur opera or ballet he was condescending to consider; sharing a profession with the fictional Oscar and a network with the Odd Couple sitcom, he was a natural foil and heaven-sent special guest (twice). But Oscar’s rivalry with him was the equal clash of two abrasive personalities, not the territorial struggle of those who want the same thing. Felix, of course, could dive into the fray with the deepest indignation since Cosell, as both the most successful sports commentator in the world and a certified intellectual, was a hybrid embodiment of everything Oscar didn’t care about achieving and everything Felix fancied himself and failed to be.

In the world of The Odd Couple everyone just happens to know everyone else; the simulated intimacy of Twitter followings is manifested in Felix just happening to have been one-half of a USO song-and-dance team with future Family Feud patriarch Richard Dawson (playing himself), or Oscar having been old war buddies with country-music icon Roy Clark, playing an unknown classical violinist whom Felix wants to nurture (sometimes, through the prism of this sitcom, already-famous figures from real life got to pretend they were someone else too).