ALL INSTALLMENTS
Thirty minutes of fame, with commercials 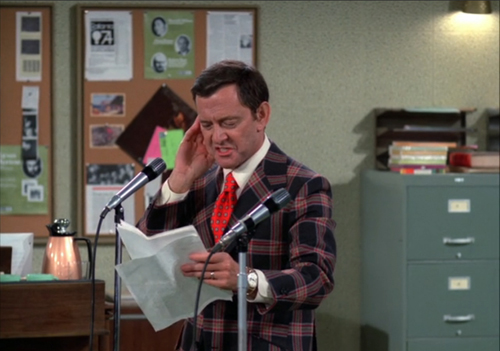 In the midst of Oscar and Felix’s retreats to peaceful monasteries to learn how not to kill each other, their submission to role-play psychology and hypnosis to overcome their neurotic flaws, and other perennial plotlines centered on their incompatibility with each other and maybe anybody, was a recurrent theme of Felix striving to generate stardom, often but not always siphoning from Oscar’s low-level media contacts. Every narcissistic tendency lamented in the decades since, from the self-delusion of talent-show hopefuls to the self-regard of reality-show personalities to the self-absorption of internet do-it-yourself legends, was lampooned in the figure of Felix before many of those trends had a chance to fire their first shot.

Oscar works in the then not-yet-obsolescent medium of newspapers as a sports writer, and has zero illusions about its glamour even though (and likely because) it brings him into regular personal contact with the celebrity giants of the athletic field and others; it’s Felix, looking from the outside in, who sees things refracted as magic. We watch him star-stalking before it was a vocation, trying to sell his corny songs to Oscar’s one-episode girlfriend, the singer Jaye P. Morgan, or demanding that songwriter Paul Williams dissuade Felix’s daughter from following Williams around like a Deadhead (The Odd Couple tended toward mid-famous guest-stars calibrated to the quality of Felix’s ambition). We see Felix commandeering gameshow appearances with epically disastrous results (like a classic jag of pseudo-intellectual grandstanding on the middlebrow concept-association quiz-show Password.)

Felix had his predecessors. Most prominent of course was Lucy Ricardo, eternally seeking to sneak onstage at her husband’s club. But Lucy was a suppressed woman striving for a means of expression; Felix is a presumptuous male coveting attention. And The Odd Couple had its precedents. Almost from the start of TV, there were sitcoms that set themselves within the fishbowl of the medium’s own production. But the variety-show writer’s room of The Dick Van Dyke Show, and the nightly newsroom of The Mary Tyler Moore Show, were understood as the men and women behind the curtain between creation and a clearly defined reality; only Felix floated freely between the real world he was born in and the fulfilled figments of his imagination.