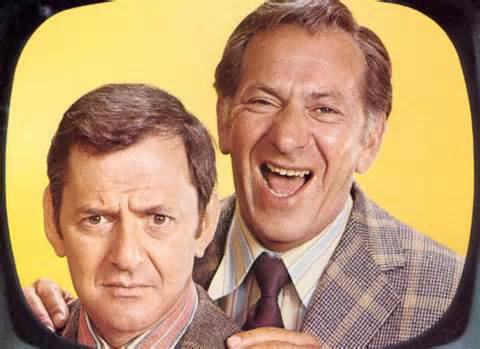 Long before everyone had their own show on the small screen in their hand, my little sister and I knew that the TV was a two-way looking-glass. Our dad, in the course of promoting his self-published poetry book, had made peanut-butter & banana sandwiches in an on-air cooking segment with a 1950s Ohio talkshow host back when all television was local; in the early 1970s me and sis got ourselves into the on-camera audience gathered round the feet of a Philly kids’-show host retelling the Scrooge story. Dad would come home all the time with stories of collective-unconscious encounters with household-unknown character actors in his salesman job on the streets of New York — always identifying them not by who they were, but who they played. “I met The Frog today,” he’d thrill us, meaning the guy who’d played a frog turned into a jittery lovable wimp on the supernatural Bewitched sitcom; names have power, and aliases have superpower. The guy he meant was John Fiedler, who was also a perennial player on The Odd Couple.

Everyone knows that title; Neil Simon’s stageplay about divorced and diametrically opposed roommates, which has installed itself in Broadway revivals and TV reiterations since its debut in 1965. This defining comedy’s dualities have made it an enduring meme — chaos and order incarnated in the life-loving, inconsiderate slob Oscar Madison and the reticent, sensitive snob Felix Unger; an imperfect union that resonates with every friendship and business and marriage and country that manages to stay together. The most sustained expansion on the scenario to date is the TV comedy series that ran from 1970-75. The binary sloppy/neat schism, the debatable gay dynamic, are well-worn considerations under the surface of this sitcom’s cleverness. Less remarked on is its recurrent critique of celebrity fetishism. Another contrast between Oscar and Felix is that Oscar is a semi-public person who wants to be left alone, while Felix is a workaday creative who’s desperate to be noticed. The tensions this fosters speak volumes to 21st century social-media anxiety.