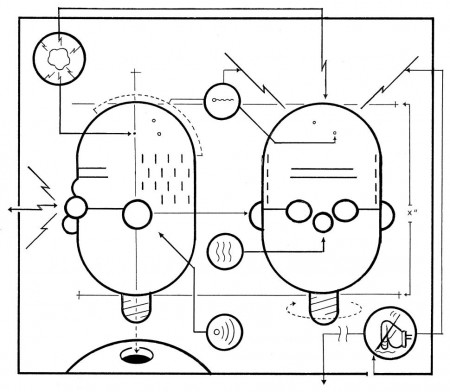 The overshadowing of a tale by the tale’s telling is sometimes called postmodern, but from Cervantes’ Quixote chasing his counterfeit others to Borges weaving his circular ruins, or Spike Jonze’s and Charlie Kaufman’s Being John Malkovich, this practice has a long history. Cartoonist CHRIS WARE (born 1967) is one of our favorites. A child of the Silver Age of Comics, Ware’s spare, clockwork micro and macro tragedies are awash in self-awareness, a formalist mirror for the painful, autobiographically laced stories that populate his panels. Big Tex is a mentally challenged cowboy subject to the abusive loathings of his parents; Rocket Sam, a space castaway, fashions robots as company and then, wracked by self-hate, loneliness, and petty narcissism, destroys them. Rusty Brown, a comic-collecting, overweight schlub, is a self-destructive and abhorrent loner who makes Dostoyevski’s personages seem tame. Both a writer and an artist, a storyteller and an illustrator, Ware’s works are changing the history of literature, comic books, and art simultaneously.