From 1941 to 1985, Mexican-American artist GUS ARRIOLA’s (1917–2008) comic strip Gordo delighted and bemused readers. The strip’s Sunday splash pages, which married Winsor McCay-esque surrealism to a jazzy color palette, were particularly ambitious. Gordo is also notable because it was one of the few daily, mainstream narrative media that focused on Mexico and Mexicans; although it began as a strip focused on a fat, lazy protagonist, it offered a positive view of Mexican culture. (For a Mexican-American kid with little access to Mexican culture, Gordo was like an angel perched on my shoulder, balancing out the devilish Speedy Gonzales on the other.) In an American pop-culture sea of stereotypes featuring raping bandit Mexicans (in case you’re wondering where idiot Donald Trump gets his ideas), dirty, pre-civilization Latinas/os, and the rest, Gordo provided a brimming visual cauldron of subterranean semiotic insurrection, surreptitiously introducing readers to Mexicans and Spanish-language culture with a light touch, and a rigorous and disruptive — postmodernist, even — compositional eye. Old-school hands in the comics trade like Mort Walker and Charles M. Schulz envied Arriola’s eye and pen; Schulz touted Arriola’s strip as the “the most beautifully drawn strip in the history of the business.” 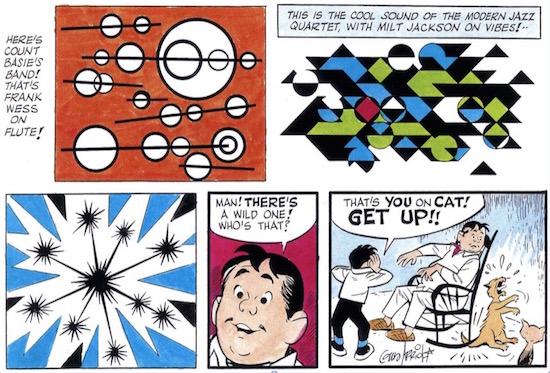 On his or her birthday, HiLobrow irregularly pays tribute to one of our high-, low-, no-, or hilobrow heroes. Also born this date: Wong Kar-Wai, Geezer Butler, M.I.A, Berenice Abbott.