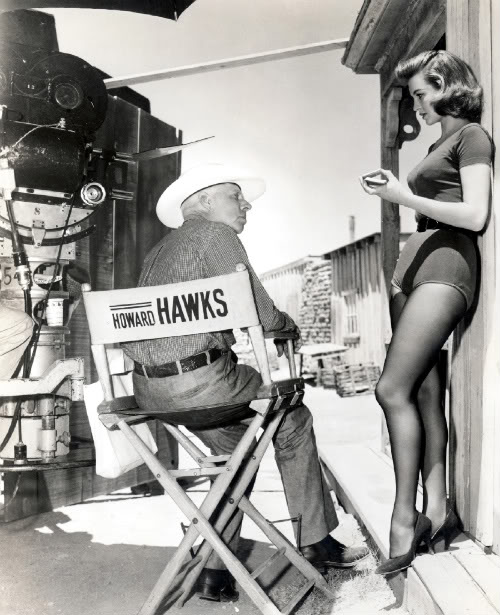 HOWARD HAWKS (1896–1977) came into his own in 1932 with his third sound film, Scarface — with Wellman’s The Public Enemy, the first modern gangster film — and, over the next twenty-five years, defined or refined the dialogue comedy (His Girl Friday), the war picture (Sergeant York), the detective yarn (The Big Sleep), and the musical adaptation (Gentlemen Prefer Blondes). That we think of Hawks as an artist as well as a master of genre can be chalked up to the Cahiers du Cinema circle and their English-language ambassadors Robin Wood and Andrew Sarris, whose 1968 book The American Cinema ensconced him in the “pantheon” alongside Griffith, Murnau, and Renoir — the kind of then-radical low-to-high recategorization critics (and not just film critics) have learned to perform by rote. His self-selecting male groups (of newshounds, aviators, and even scholars) and one-of-the-guys “Hawksian women” are now the stuff of film-studies textbooks, as is the playful approach to gender that undercuts (some of) the machismo. As Grant is made to say in I Was a Male War Bride, “Turning a man into a woman is a complicated business,” and even 1959’s Rio Bravo — an inverted High Noon in which other folks do support their local sheriff — pauses to imagine how John Wayne would look in red bloomers. Hawks’s post-retirement interviews with slavering auteurists were as matter-of-fact as his protagonists, with none of Hitchcock’s self-serving talk of “pure cinema,” nor any concession that he’d been making Art all along. A good director, he insisted, was “someone who doesn’t annoy you.”